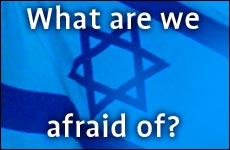 Why is my home so far from my homeland? Why don't I live in Israel where history and destiny weave the streets of our identity as a people?

To Jews who live in the Diaspora, the experience of walking through the streets of Jerusalem makes most of us question our country of residence. Watching bar mitzvah boys help Holocaust survivors onto buses that never run on Shabbat, paying for challah with currency that hold the faces of Jewish heroes -- the contradiction is so overwhelming it comes nearly as an afterthought.

Why is my home so far from my homeland? What am I afraid of? Why do I not live here, where history and destiny weave the streets of our identity as a people?

We live outside the Land of Israel with that twinge of confusion and guilt associated inevitably with our commitment to Israel and Jewish continuity on the one hand and life in the Diaspora on the other. Nothing can feel more unnatural than living in exile, so why do we choose to do it?

The very least we can do is be honest about our reasons for staying in a place with hockey and bilingual cereal, far from the modern land of milk and honey.

It's a difficult question to confront. It often looms large when terror shows Israel's pain in prime time sound bites, when Israeli relatives unintentionally demonstrate the life you could have lived had you made the same courageous decision they did. If we want to live honestly as Jews, the very least we can do is be honest about our reasons for staying in a place with hockey and bilingual cereal, far from the modern land of milk and honey. We have to ask: what keeps us away?

An answer may be hard to articulate. It could be we're afraid our Hebrew isn't strong enough, that the context of life anywhere is always language and that in Israel, despite our Jewishness, we would always be at a loss for words.

It could be we're worried about our jobs, concerned that, like many others, our immigration will fail and send us back to winter vacations, medi-care and bigger housing.

It could be we're afraid of our children having to graduate from childhood into the military, getting frisked before buying milk, treating terrorism like Canadians treat the weather, wondering if we'll be waiting at a bus stop marked for terror.

Maybe we've been given the impression that we're not wanted or, as historian Benny Morris said at a fundraiser near Montreal three years ago, "the country's full."

Maybe we're afraid the culture is too different, that Israeli Jewishness is too unlike North American Jewishness, that Israel is so connected culturally to the Middle East, or to Europe, that we could, as Herzl dreamed, find ourselves in a Jewish Switzerland, (and who wants to move to Zurich?).

It could be we're simply afraid of being immigrants in any country, especially our own, having to repeat many of the same difficulties endured this century by Jewish immigrants in North America, where English will be our Yiddish, making fun of Israeli politicians like our grandparents mocked French leaders.

Maybe it's a fear of uncertainty, afraid of jumping from a stable, superpower-protected neighborhood to one where Jews have to live behind F-16s; unsure whether participating hands-on in the Zionist enterprise is worth trading the peace-and-prosperity of a centuries-old country for the controversy-and-conscription of a state as old as your average baby boomer.

Perhaps we feel we can do more for Jews by living here, as if being involved in Jewish fundraising and writing impassioned letters to editors can match paying income tax to the Israeli government or taking Egged buses to work everyday.

Perhaps we feel we missed the last boat powered by sufficient idealism and prophetic certainty, which sailed into Haifa and Tel Aviv harbors in the mid-1950s, and again in 1967, when the winds of Jewish revolution would have been strong enough to send us to a land where none is too few, as opposed to one where none is to many.

Perhaps it's because the revolution has ended, and our life is here in Canada. This is where we are comfortably taking root. Our families are here. Perhaps, inevitably, we feel ourselves to be Canadian Jews, not simply Jews, like the late Mordecai Richler described in This Year In Jerusalem, that although a Canadian culture is intelligible, we are certain it exists in us nonetheless. Perhaps we are bi-nationalists in the sincerest sense, feeling that Trudeau and Ben Gurion both, in varying degrees, played a crucial role in molding what we're apart of. Perhaps both countries make us feel like we belong.

The answer may be one, all or none of these. Who knows? The important thing is that we ask the question and honestly search for our own answer. Only by confronting them we can overcome them.

Noah is the former co-president of Hillel at Concordia University in Montreal and is currently in law school at Universite de Montreal.