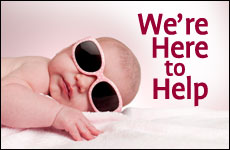 New parents need our help. But what we’re doing right now could use some work.

When a new baby is born, we all love showering it with gifts. No one knows why that is but it just is. And for the most part, we give outfits. This is because there are so many baby outfits around, that we’re bound to hit upon one that the new parents don’t have yet. Or else we’ll get them one that they do have, and they’ll be able to take it along to weddings, so that no matter what the baby does, it will look like it’s wearing the same outfit in all of the pictures. But if you’re buying an outfit, you should probably buy one that’s bigger than the newborn size. Most parents get about 500 outfits for ages 0-3 months, so for three months their baby never has to wear the same thing twice, and then all of a sudden it outgrows everything in its closet and has nothing to wear for the rest of its life.

With baby clothes, you have to choose between several cute but humiliating outfits.

So if you’re buying baby outfits, there aren’t that many basic styles to choose from. You can buy the kind that looks like a miniature uniform, such as a sailor suit, despite the fact that sailors themselves only wear sailor suits because they’re going to be away from their wives for about fifty weeks per year. Plus they’re stuck on a boat, so they’re only seen by the same few guys, all of whom are wearing pretty much the same thing. A regular soldier wouldn’t be caught dead in that outfit, because he has to go out and face enemy soldiers, who would take one look at him and laugh themselves silly. “We may be losing this war,” they would howl, tears streaming down their cheeks, “But at least we don’t have to wear that!”

The other basic baby outfit style is the one with no separate pant legs -- both legs go into the same communal area, in case the baby wants to, I don’t know, compete in a potato sack race. The logic behind this outfit is that, after all, where’s the baby going, anyway? I’ll tell you where the baby’s going. The baby is going into a car seat, which, by federal law, is required to have a strap between the legs, and the mommy isn’t going to realize this until she’s running late and trying to strap it into the car. Or into a snowsuit.

So basically, if you want to buy clothing for a baby, you’re going to have to choose between several cute but seriously humiliating outfits. It’s a good thing babies can’t talk. Think about it. How many adults wear outfits where the only way in and out is through a small hole near the back of the neck? Or one with snaps going up and down both legs, which would take forever to close, and would pop open at inopportune times, like during important business presentations or while running for the bus? Clothes like these are probably the main reason you see so few babies in powerful corporate positions.

And what if it’s not the family’s first baby? Once they already have a couple of kids, you can pretty much assume that they have all the humiliating baby outfits they need. So a lot of communities arrange to have all of the new mommy’s friends and neighbors make meals, in order to give the new parents something they can never have enough of – time. It also helps the people around them express their love and creativity by preparing a meal that is the very expression of their heart. But usually what they send is chicken and rice. After my son Daniel was born, we got over a week’s worth of meals, and every single one, with the exception of the Shabbat meal, was chicken and rice. (The Shabbat meal also had soup, and some kind of orange kugel that, to this day, we have no idea what it was. Was it carrot? Pumpkin? Sweet potato? We’ll never know. But it was a nice break from rice.)

And very often, whoever arranges the meals does so long after the person has the baby. Sometimes the child is already in Kindergarten. I think we should get our act together and start arranging meals as soon as a couple have the baby, while the mommy is still in the hospital. That way, her husband doesn’t have to go hungry for the first few days.

Also, a lot of times we take it too far. Some people make a salad, which is very nice, but then they feel the need to pack a small container of dressing on the side. Okay, so it’s hard for the mommy to make meals, but just because she had a baby doesn’t mean that someone suddenly drank all the salad dressing. Not that I’m complaining, but it’s just something extra to spill in the car. They come to your door, and they hand you the meals and say, “Make sure to hold it like this, because everything’s covered in dressing.”

We should also probably work on spacing out the meals we send, as opposed to sending it eight nights in a row. When we had our first child, we were sent a supper every night from Monday until the following Tuesday, and everyone was afraid to send too little food, so they sent too much. And then we had to figure out how to fit it all in the fridge. (“Is this Monday’s chicken, or Tuesday’s?”) So some of the meals we got, we pushed off eating, because we didn’t want to end up getting to our Monday leftovers the following Wednesday. So after two days of getting food, we decided to eat our Monday chicken again, and someone showed up at the door with another dripping pan of chicken, which we accepted gracefully, and then crammed into the fridge for a different day. And then we were a day behind.

With the amount of food that we’re forcing these new parents to eat, we should probably be getting them outfits.

If Winnie the Pooh were Jewish

Marnie’s Guide to Unique Jewish Diseases II
It Takes A Lot Of Faith To Be An Atheist
How Instagram Brought Back This Nostalgic Soup
What Makes Eli Run?
Comments
MOST POPULAR IN Jewlarious
Our privacy policy