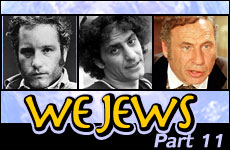 Where would we be without our Jewish mothers?

“The Jewish Mother.” Never has one tiny adjective evoked such a firestorm. Make a speech in front of any Sisterhood meeting and play a little word association: “Loves her kids – to death!” “Always with the food!” “She won’t take a ‘no.’” “Oy, the guilt!”

There you have it. The core. The essence of a peculiar conundrum that Jewish mothers and their children have been facing for the better part of the last 100 or so years, as many of these mamas and “bubbies” left their small European towns (shtetls) to come to the Golden Lands.

Much has been said about them, written about them (including my own “Yiddishe Mamas: The Truth About the Jewish Mother”), and images in film and TV abound. The “truth?” We’re a complex melange born of religion, ethnicity, culture, values imprinted upon our own mighty individuality. So let’s take a look at what some of their children had to say about them.

According to Bruno Halious, in his book, Meres Juives des Hommes Celebres (Jewish Mothers of Famous Men), when Albert Einstein won the Nobel Prize in 1921, he sent a telegram to his mother which read:

“Mother - WE won the Nobel Prize.”

According to author Tim Boxer, when Richard Dreyfuss was presented an award on behalf of Tel Aviv’s Museum of the Jewish Diaspora [Beit Hatefutsot] by Consul General Uri Savir, Dreyfuss said the award was more important to him than the Oscar. “The Oscar you get for playing someone else. This award you get for being yourself. For the Oscar, you have a long list of people to thank. For this, you thank only your mother.”

“Only once in my childhood did my mother hit me. When I was ten years old my teacher sent a note home asking her to come to the school the next day, a Friday. During this meeting my teacher complained I was completely out of control. I did whatever I wanted to do. My mother slapped me. ‘What's that for?’ I asked.

‘To bring you back to earth. Just because you sing nice don't mean you're better than anyone else 'cause you're not, and you never will be. And the rest of it is because you pulled me away from the house when I needed to prepare for Sabbath!’"

My mother loved children - she would have given anything if I had been one. – Groucho Marx

Once she borrowed a commutation pass to ride the bus from her neighbor, one Mary McCarthy. When she presented the pass book to a very Prussian looking man in uniform, he took one look at the name – then Mama – and insisted she sign her name on the ticket.

King took mama to see Fiddler on the Roof, thinking it remind her of her childhood village. Afterward, he asked: “Ma, Did it bring back memories?”

“It was wonderful,” she said. “Only I don't remember so much singing.”

To Melvin Kaminsky (Mel Brooks), born in Brooklyn in 1926, his Mama was a heroine. Widowed when Mel was two, she worked days in the garment district and nights making bathing suit sashes. Yet, she adored him. “I was always in the air ... kissed and thrown in the air again. Until I was six, my feet didn’t touch the ground.” Brooks, who took his surname from her maiden name (Brookman) stated, she “was the best cook in the world, ‘I make a matzoh ball,’ she used to say, ‘that will sweep you off your feet.’”

According to Fred A. Bernstein’s “The Jewish Mothers’ Hall of Fame,” the controversial advocate still had a Jewish mother. While he was a fugitive, mama, Florence Hoffman, managed to send him dental floss and toothbrushes through underground connections, along with notes reminding him of the importance of dental hygiene. No matter where he was going, or what he was doing, Florence always had the same advice: “Dress warmly.” Abbie once said: “When I think of her, I think of the Merle Haggard song. You know, ‘Mama Tried.’”

When the author interviewed Rabbi and comedian Bob Alper about his mother, he said:

“My mother was a New Englander, not your typical Yiddishe Mama. My becoming a rabbi was a dream come true for her, as her brother was a Rabbi who died young. She was skeptical but supportive when I turned to comedy. Yet, at 85, her first question to me was, ‘any new gig?’” She loved being the center of attention. In deference to her, I took the mother stuff out of the act. She was insulted: ‘Why didn’t you use that bit about me?’”

“She attended my performances and kept scrap books. The day before she died, I got an agent. She knew it — which was nice. She died last year ... now, there’s no one to send articles to.”

My mother's love for me was so great I have worked hard to justify it. – Marc Chagall

A few years ago, I was pleased and honored-and amused-to address the National Press Club on faith, vision, and values in American life... The amusement was occasioned by a vivid memory of my late Jewish mother. I had phoned her ... [and] said:

“Mom, the TV academy has just established a Hall of Fame and guess who the first inductees will be? Milton Berle, William Paley, David Sarnoff, Lucille Ball, Edward R. Murrow, and me.’

From “Yentl" to “Golda’s Balcony,” Tovah Feldshuh is the quintessential performer who can do it all – in theater, film, TV and cabaret. Winner of numerous awards during her illustrious career, she is also a recipient of the Eleanor Roosevelt Humanitas Award, the Israel Peace Medal, and the National Foundation for Jewish Culture's Jewish Image Award. She is married and has two children, Garson Brandon and Amanda Claire.

“My mother, Lily, is a phenomenal parent. She was the connoisseur of tough love. She would say:

*‘Selfish people are the loneliest people in the world.’

*‘When you walk into a room, see what’s wanted and needed in that space.’

Tovah’s philosophy? Simple. “To be a good mother, Jewish or otherwise, you need to do two things: love your children unconditionally – and show up.”

Schlock Rock Rocks
Why Are The Prayers Of Yom Kipur So Repetetive?
Ha'azinu 5783: A Time for Unity!
Twisted Thinking
Comments