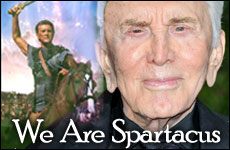 You do not need to be a movie star to stand up for basic human freedom.

Kirk Douglas' recently published his tenth book, "I Am Spartacus! Making a Film, Breaking the Blacklist."

When you reach 95, after you get over your surprise, you start looking back. I've been thinking a lot about my parents, Russian immigrants who came to this country in 1912 – exactly one hundred years ago.

For them, the United States was a dream beyond description. They couldn't read or write, but they saw a better life for their children in a new country half a world away from their tiny shtetl.

Against all odds they crossed the Atlantic. And like millions of people before and after, they passed close to the Statue of Liberty as they entered New York Harbor. Perhaps someone who could read English translated the beautiful words of Emma Lazarus, etched in bronze on the pedestal:

"Give me your tired, your poor, your huddled masses yearning to breathe free, the wretched refuse of your teeming shore. Send these, the homeless, tempest-tost to me, I lift my lamp beside the golden door."

What would my parents think about America if they arrived here today? Would they even want to come? I wonder.

A century ago, America was a beacon of hope to the world. Life, liberty and the pursuit of happiness were ideals not clichés. Any boy could still grow up to be president. Today, few boys–or girls, for that matter–dream of that. The American dream has become about quick fame and easy fortune, not public service and hard work.

I know something about this. I have been an actor for most of my life. When I started out, I didn't think about anything except what was good for me. Like many movie stars, I became all wrapped up in myself. When I threw off the wrappings, I wrapped myself in the character I was playing.

My change came suddenly when I heard these words spoken by President Kennedy in his Inaugural Address in 1961:

It was a moment of clarity for me – like somebody had flipped a switch and the lights came on.

I had been lucky. Fame is as much about luck as it is about talent, perhaps more. My luck hadn't come without a lot of hard work, but I now realized that it carried a responsibility along with it. JFK's call to conscience made me understand that.

His words also reminded me of something my mother taught me.

For years we lived in a little town called Amsterdam, New York. We had a house near the carpet mills and the railroad tracks. We were very poor and often didn't have enough to eat. Although we had nothing to spare, the hobos from the trains still came knocking on our door in the evening, asking for food. It scared me to look at them–disheveled, dirty. My mother was never frightened. Somehow she always found a little extra food to give them.

Then she said something I never forgot: "Issur,"–that was my name then–"even a beggar must give to another beggar who needs it more than he does."

The fight against oppression and tyranny depicted in Spartacus is still going on all over the globe from Syria to Egypt to Iran.

I was an American movie star whose pictures were seen all around the world. This gave me the opportunity to do something for my country that most Americans couldn't do. So I became an Ambassador of Goodwill for the State Department and traveled to 40 countries talking about America. I wasn't viewed as a Democrat or a Republican. They only saw me as an American. By the way, I paid all my own expenses–I didn't want anyone to say that Kirk Douglas traveled abroad on the taxpayers' dime.

But you do not need to be a movie star to stand up for basic human freedom. The fight against oppression and tyranny depicted in Spartacus is still going on all over the globe from Syria to Egypt to Iran. Even the Russians are once again facing the threat of a popular uprising.

Related Article: I Am Issur

I believe much of the divisiveness in the world is caused by religious fanaticism, even in the time of Spartacus when they worshipped many gods. As you study history, you find that millions of people have been killed because of religious divisions based on false orthodoxy, not genuine spirituality.

After 95 years on this planet, I have come to the conclusion that the human spirit can never be crushed, no matter how cruel the oppressor or fanatic the belief. If we remember that simple truth–and act on it every day in small ways and sometimes in large movements–then freedom will ultimately win.

And then we are all Spartacus. 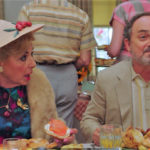 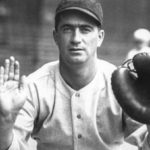 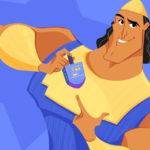