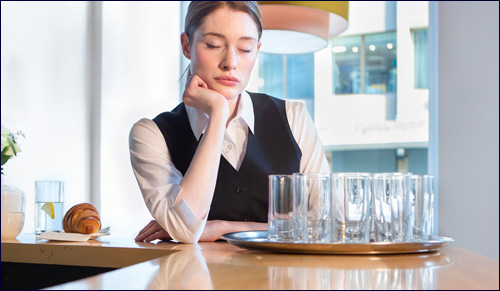 We all have the ability to light a person’s soul.

My friend and I met for dinner at a local steakhouse. The restaurant was severely short staffed that night with just two waitresses on call. We waited a bit until one appeared and took our order. She apologized profusely for the delay before dashing over to a man a few tables away. I could sense the man’s anger and noticed him berate her for the lack of attention.

We were bothered by the man’s behavior, especially after we noticed him write several sentences on his bill. He got up, walked over to the manager’s stand, and handed the waitress his bill. I don’t know what he wrote in that billfold nor what he told her, but we saw the 20-something year old waitress stand behind the manager's stand, her eyes full with tears.

Our hearts broke for her as the poor girl explained how hard she tried to service him. Here she was, trying her best, and a classless, unrefined man had broken her.

The man left, we returned to our dinner, and the waitress slowly wiped away her tears.

When it came time to leave, my friend and I considered writing her a short note, rebutting the man’s hurtful remarks. But then we thought how hurt she’d been and decided to fight fire with fire. We strode over to her, smiled as we handed over our bill, and assured her the previous diner was a crude man who simply couldn’t appreciate her efforts. We went on to detail how admirable her service was and how one diner’s coarse remarks warrant no attention.

She looked up with the most appreciative look and by that time, her co-waitress had slid up as well and was listening to our chat, eagerly basking in the praise.

We said goodbye and stepped out into the balmy summer night. As we left, I noticed the waitress staring at us through the glass windows.

Then it hit me. In the fleeting moments that make up life, we often come across a person who needs a little bit of light, a little bit of spark, to brighten their life. Their inner light has been doused by some retardant and they struggle as their light flickers.

King Solomon wrote, “The flame of God is a person’s soul,” (Proverbs, 20:27). We have the ability to light up another’s life, to briefly touch their life with ours, to connect their wick with our wick, brighten their life before disengaging and walking away.

The more potent kindness is to meet them not at their surface, but at their core, to take our soul and touch their soul, and to keep it there for just a bit longer, as their soul begins to catch fire.

When you see someone in pain, broken, their flame wavering, engage and step forward. Light their soul. And don’t leave right away. Wait. Wait until they’ve been lit and they can stand on their own two feet. Wait until you see them radiant again, all by themselves. Wait until you see the embers in their eyes glowing – until the small sparks inside of them slowly explode one by one, engulfing them in a full, blazing flame.

My friend and I could’ve written that waitress a short note, but that would’ve been a brief kindle. Staying behind with her, igniting her shivering soul and transforming her spark into the largest bonfire in town was the lesson we learned over one simple dinner.