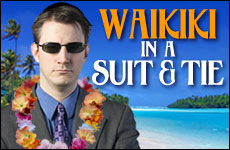 Adventures of a religious guy on business in Hawaii.

When you think of Hawaii you think of a tropical paradise: golden sand beaches, 80 degree ocean water, hot, humid weather, sunbathing, surfing and other beach fun. What you don't think of is being in that "slice of heaven" in a suit and tie. Unless of course you're me. Because I'm Ross Hirschmann, religious guy on business in Hawaii.

When I took my current job, I had no idea that I'd be spending a lot of time on "the Islands." About a week after I was hired, I met my new boss for the requisite "get to know you" meeting. It went well (meetings with your boss always do when you first start a job. It's all the meetings after that initial one that are the problem). At the end of the meeting, he turned and casually said, "Oh, did I tell you that your territory includes Hawaii?"

"Hawaii?!" I thought to myself. "No, I think I would have remembered that one."

"That's okay isn't it?" he continued.

Me, Ross Hirschmann, religious guy in a kippah, would now be frequenting the streets of Honolulu and Waikiki.

What would he have me say? "No, it's not okay, so if it's all the same to you, I'm going to start my job search all over again. Only this time, all I have to do is explain why I only spent one day at my last job." So, in a rather unceremonious manner, I became the new Hawaii rep. Me, Ross Hirschmann, religious guy in a kippah, would now be frequenting the streets of Honolulu and Waikiki.

The night before my first trip to Honolulu I had to decide what to wear on the plane. Most people have never met an Orthodox Jew so when people see me enter a room, they don't see a tall blond- haired guy in a suit. All they see is a 6-foot tall kippah walking in.

I also remembered something my father had told me years ago. When he was a young man, commercial air travel was still new and was unaffordable to the general population. Because it was a special event to travel by plane, the passengers dressed up. Men wore suits, ties and hats and women wore dresses. It was very elegant and very dignified.

Sociological studies support what American society seemed to know intuitively in the 40's and 50's: how you dress affects how you comport yourself. You behave better when you're dressed more formally. Schools that have dress codes and uniforms have far lower truancy rates than schools that allow kids to wear anything they want. How we dress for something is also our statement to the world about how we see ourselves and our relationship to what we're doing. After all, no one comes in shorts and a T-shirt to a wedding.

I made my decision: I'd wear a suit and tie on the plane to Honolulu. After all, I wear a suit and tie everyday to work. Why shouldn't I wear one just because I'm visiting customers who happen to be in Hawaii? Besides, I wanted the people on the plane -- most of whom I'm sure have never met an Orthodox Jew before -- to know that I that I am a principled individual who stands for something beyond the mere comfort of "flip-flops."

YOU'RE A COP, RIGHT?

I expected I'd be the only guy on my flight in a suit and tie, but I didn't expect everyone's reaction.

As I approached the gate, the agent smiled and said, "Good evening sir, First Class will be boarding momentarily."

"Thank you, but I'm not in First Class."

She stared at me quizzically. I could read it on her face: "Who wears a suit and tie and is not in First Class?"

Next came the flight attendants. They were very kind, but I kept catching them staring at me. Finally one came up to me. "Is this your first time to Hawaii?" she asked with a smile, her eyes locked on my Brooks Brothers tie.

"No, my second time actually."

"Oh..." she said somewhat surprised. "Well, you know no one wears a suit and tie in Hawaii. No one."

"Except me I guess." I smiled. She smiled back.

At the end of the flight, as I was leaving that flight attendant said, "It's nice to see a man all dressed up. You don't see that much anymore."

She was right. Since the late 60's American society has progressively dressed down. Polo shirts and slacks have replaced the man in the gray flannel suit. My father said that when he was my age he never left the house without a tie. Never considered it.

I became a glaring contrast to the entire culture of Hawaii that stands for vacation and indulgence. When I got to hotel, people in all types of revealing swim and beach wear stared at me as I made my way to the front desk to check in. My suit and tie was an important statement to the world of Hawaii: guys in kippahs are not a part of the "anything goes" society.

While visiting customers the next day, a woman at the elevator stared at me and then finally smiled and said, "You're a cop, right? FBI?"

"You must be a lawyer then. Lawyers and FBI are the only ones who wear suits and ties on Oahu."

"Wait!" I said. "I remember watching Hawaii 5-0 on TV and McGarrett and Dano and that whole police department wore suits and ties."

She thought about it. "That's true," she said. "But that was in the 70's. Things have changed. Even regular cops don't wear ties anymore. You look nice, though."

One person thought I was a rabbi and still another swore that I was CIA. But everyone said it's nice to see someone in Hawaii in a suit and tie.

I quickly became the most memorable pharmaceutical sales rep in Hawaii. Nine people told me that I "had to" buy an Aloha Shirt and dump the suit and tie. One person thought I was a rabbi and still another swore that I was CIA. But in the end, everyone expressed the same sentiment: it's nice to see someone in Hawaii in a suit and tie.

Jewish thought tells us that in life we must "separate ourselves from the wild animals." What that means is not just to make sure there's a cage between you and the lion exhibit at the zoo (although that's a solid idea). It's telling us to comport ourselves in every way -- in how we dress, how we speak, how we treat others -- in a dignified and elevated manner. Even when you're flying to a tropical paradise.

I have now voyaged to Hawaii at least ten times in the last ten months and on every trip I'm in my light green suit, white shirt and Brooks Brothers tie (I call it my "Island Wear"). And every time I get compliments about how nice it is to see someone dress in a manner that for most people conjures up an image of the past; in some ways a better past, a time when people felt more of a responsibility to society and others than to their own personal comfort or whims.

On my most recent trip, the flight attendant, who was on all ten of my other trips, came to me just before takeoff and said, "Mr. Hirschmann, your upgrade to First Class is ready. Please follow me."

I was stunned. I neither applied nor asked for any upgrade to First Class. That didn't matter. I just knew one thing: I was following her. "I wanted to do this for you," the flight attendant explained, "because I have been on all of your previous trips to Hawaii and every time you are such a nice person. And believe me, most people on any given flight are not all that nice."

I was touched and humbled that the flight attendant saw me -- the guy in the kippah -- as standing out as a nice person. That my kippah was a beacon for something positive and not something negative. I chalk it up to the suit, tie and kippah working their magic one more time.

Everything I Know About Leadership I Learned From Moses