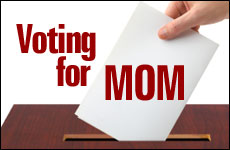 The campaign advisor warned my mother: “You can’t win unless you campaign on Saturday.”

I was in seventh grade when my mom first ran for Family Court Judge and lost by a tiny fraction of votes, half of one percent. I remember sitting in the family room glued to the numbers on the television. The house was packed with friends, family and the campaign team. It was such a close election that the final results weren't in until after midnight. After the crowd left and the platters of food were put away, I found my mom sitting at her desk which was covered with campaign material. 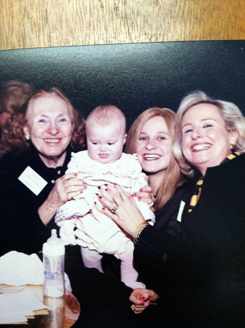 The author with her mother,
on the campaign trail.

"What are you going to do now?" I asked, a little nervous that my mother would cry in front of me. At that time in my life, there was nothing scarier than a parent crying.

She looked so defeated for a moment, but then she suddenly looked up. "I'm going to run again. And next time I'm going to win."

I felt a flood if relief flow through me as I helped my mom gather the palm cards into a neat pile. She did go on to win her next election for Family Court Judge by a landslide of votes. I'll never forget the cheering that night as the results kept coming in from each county.

But the campaign I remember the most vividly was her next campaign for New York State Supreme Court Judge. I was in high school in Manhattan at the time, and woke up each morning to see the campaign team crowded around our kitchen table. My grandmother was my mother's campaign manager, as she had been throughout all the elections, and my grandfather was my mother's strongest advocate at the railroad stations each morning as he proudly shook commuters' hands with his, "I am Judge Lefkowitz's Father" button displayed on his shirt. My grandparents showed up every morning at 5 am, dressed and ready to plan the day's schedule with the rest of the team. I had my own “I am Judge Lefkowitz's Daughter” button that I wore to the Sunday campaign events where my brother and I helped hand out campaign materials. People loved to see the Judge's children, and they would ask me all kinds of questions like:

"What do you want to be when you grow up?" A writer.

"How do you feel about your mother being a Judge?" I love it.

"Where do you go to school?" Ramaz. It's a Jewish day school.

“Just let the Sabbath thing go until you win and then you can rest as much as you want.”

It was such a hectic time that all the campaign events, fundraisers and newspaper interviews were one big blur for me. But I'll never forget overhearing this conversation in our kitchen one morning. One of my mom's top campaign advisors was standing by the counter with a cup of coffee in his hands. "Joan, I am telling you there is no way that you are going to win if you won't campaign on Saturday. That's when all of the important events are. I keep telling your mother to schedule these events, but she won't do it. Just let the Sabbath thing go until you win and then you can rest as much as you want. And I told you: I'll drive."

"I'm not getting in a car on Shabbos," my mom said quietly. "And I'm not changing my mind."

"You're going to regret this. I'm telling you," the advisor persisted.

"The discussion is over," my mom said. And it was. She never did drive to a campaign event on Shabbos. She never picked up the phone. We walked to shul Shabbos morning during that campaign as we always had. We sat beside my grandmother with her lace kerchief and blue siddur. For 24 hours there was an official break from the campaign. I appreciated the blessed silence in our home and the peace of the dancing Sabbath flames more than I ever had before.

"I just love Shabbos," my mother would say as we sat around the family room reading each Friday night.

When she won that campaign by another landslide, the advisor smiled sheepishly. "I guess you know what you're doing, Joan."

Years later, when I was already living in Israel, my mother was running for re-election to the Supreme Court. I remember staring at the mountains of Jerusalem as I spoke to her during the election night gathering. In the background I could hear the crowds of people cheering and talking in her home. And suddenly, I wished I could be there. It had been the first time that I was old enough to vote for my mom which I had done by absentee ballot. Homesickness surrounded me without warning in our own silent duplex. I stayed on the phone for a while even though it was the middle of the night, listening to the votes come in until my mom had to hang up.

And then I walked to the doorways of the rooms where our three children slept. I listened to their soft breathing and watched their fluttering eyelids. And I knew, just like I had known that morning outside the kitchen doorway years ago, that my mom had already won.