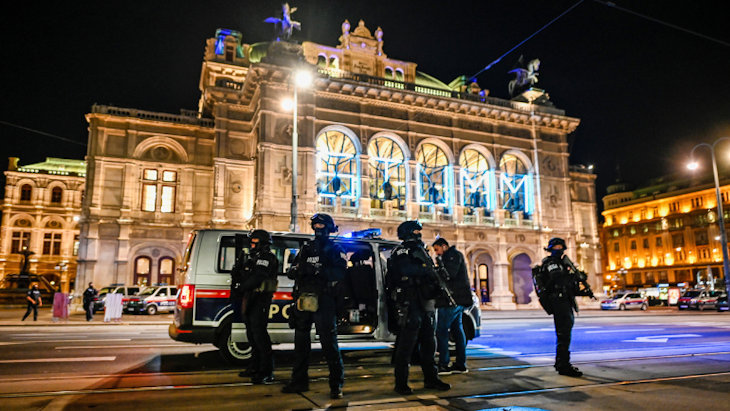 I was mailing in my application for Austrian citizenship during the Vienna terror attacks.

It's Austria’s worst terror attack in memory. On the evening of Monday, November 2, as people packed into central Vienna to enjoy the final night before Austria imposed a lockdown to help curb the pandemic, a group of heavily armed Muslim terrorists fired dozens of shots in Schwedenplatz, a public square in the heart of Vienna’s Jewish district.

“This is the nerve center of the Jewish community,” explained Shalom Berenholtz, who owns a restaurant in the neighborhood and witnessed the attack. Mr. Berenholtz watched as one of the terrorists ran down the street shooting at people indiscriminately.

“They were shooting at least 100 rounds just outside our building,” explained Rabbi Schlomo Hofmeister, whose synagogue is in the area. People sitting outside at cafes and restaurants on Judengasse (“Jew Alley”) and Seitenstettengasse Streets found themselves under attack, as terrorists directed shots at them at random.

Two women, a policeman and another man died almost immediately; over a dozen more people were injured, including several who were injured very seriously. At least one terrorist was killed by police and several more were taken into custody. The manhunt for the remaining terrorists stretched late into the night.

Jewish leaders in Vienna urged Austrian Jews not to leave their homes. If they have to go outside, they were instructed to first remove their kippahs.

As I read about the recent horrific attack, trying laboriously to decipher the German on my phone, the message to Austria’s Jews was so extreme I could hardly believe my eyes: Terroralarm!! Zu Hause bleiben fur 24 Stunden – “Terror Alert!! Stay home for 24 hours!” it read. This was an official notice sent out to all Jews in Vienna from the communal Jewish group in the city, informing Vienna’s Jews that it was too dangerous for any Jew to step outside.

For me, the timing of this notice couldn’t be worse. I was standing in line in the post office, about to mail a stack of documents I’d been preparing for months to Vienna: my application for Austrian citizenship.

Austria recently passed a law allowing direct descendants of people who were forced to flee by the Nazis to apply for citizenship. Since both my grandparents left Austria after the Nazi takeover, arriving in the United States just weeks before World War II broke out, I am eligible and decided to apply for many reasons.

I grew up hearing about the scores of relatives we lost there in the Holocaust. In some ways, our family felt so Austrian while I was growing up. We ate Austrian food often, we heard stories about my grandparents' childhood there. The thought of gaining Austrian citizenship today feels like a matter of reclaiming what my beloved Grandma once lost.

Applying for citizenship is also a way of seeking justice, to take a small step towards righting some of the wrongs that was done to my family. My Grandma's history shows that she was never really Austrian at all – not in the eyes of her many schoolmates who became passionate Nazis in the 1930s; not in the eyes of the Nazi regime; and not – after moving to America and the horrors of the Holocaust – in her own eyes either.

For months I’ve been immersed in Austrian history, assembling a mountain of documents from my grandmother and other relatives, gathering paperwork, and cataloging my family history.

I found my Grandma’s birth certificate, written in swirly old-fashioned German handwriting. I read the address where she used to live with her parents and found the imposing, beautiful apartment building online. I found Grandma’s enrollment forms from the University of Vienna where she was a student in the medical school. I sifted through old family photographs and even found an edelweiss flower Grandma picked in the Alpine countryside, pressed in the pages of a book and brought with her years later to America.

I read with gratitude about Austria’s youthful Chancellor, Sebastian Kurz, who is a champion for Israel within the European Union. I joined an online group of people who were also applying for Austrian citizenship, and we compared notes about our Austrian grandparents. I’ve been in touch with officials in the Austrian consulate, and found them incredibly helpful and solicitous. I’ve even begun laboriously learning some German – not because I have any plans to live in Austria in the future, but because I’ve come to feel so intimately connected with the country.

Yet Monday’s tragic attack reminds us that no matter how secure we feel as Jews in Europe or the United States or elsewhere, no matter what assurances we hear from the governing authorities, we can never truly relax. This is not our home.

Austria long ago shed many of its horrible anti-Semitic attitudes and today welcomes Jews with open arms, but today Jews are still not able to walk outside without fear. The coordinated terror attacks in Vienna were apparently perpetrated by Muslim terrorists and targeted all Austrians, not only Jews, yet they started in the heart of Vienna’s Jewish quarter.

A 2019 poll by the ADL found high levels of anti-Semitism in Austria (as in other European nations): 10% of Austrians reported blaming Jews for most of the world’s wars; 44% said Jews talk “too much” about the Holocaust; and 31% of Austrians agreed with the statement that people hate Jews because of the way Jews behave. In Austria , as elsewhere, Jews are being targeted in violent attacks at ever higher rates.

As I stood in line in the post office I thought of my Jewish brothers and sisters in Vienna who were ordered to stay indoors lest they find themselves being attacked and killed. Trying to take my mind off the unfolding attacks, I looked once more through the documents I was sending to Austria with my citizenship application. Suddenly, they looked so much less cheerful and promising than before.

There was my grandmother’s Viennese birth certificate – with the word Israelitish – “Israelite” – stamped on it in large letters. There was her University of Vienna registration: she was expelled from the university in 1938, along with the other Jewish students. Her registration documents from that year, written in neat cursive handwriting, overlayed with angry lines of thick red ink scribbled across the page. I looked at her emigration permit and noticed its official swastika stamp. That same swastika defaced her otherwise beautiful picture in her passport.

Yes, Jews are welcomed in Austria today, but they face a daily threat of violence and an undercurrent of hatred – both from some Muslim immigrant communities and also from segments of the general population. Just a few weeks ago, Austria’s Chancellor Sebastian Kurz announced a new plan for government funding for security at Jewish sites. He was responding to recent attacks on Austrian Jews, including the August 24, 2020 violent attack with a baseball bat by a Syrian immigrant on Elie Rosen, the Jewish communal leader in the city of Graz, as Mr. Rosen made his way to a local Jewish center. “The last weeks have shown that we have to act together to protect Jewish life in Austria even more determinedly,” Chancellor Kurz said at the time.

I’ve been thinking a lot of what my grandmother would say about my applying for citizenship in the country she fled. I imagine she’d tell me a story she liked to tell about the days before she fled Austria for good. She was getting new clothes made and her seamstress told her she was crazy to leave. Her whole family, her friends, her life were all in Vienna. Surely the anti-Jewish sentiment would blow over soon. My grandmother just looked at the seamstress and posed a question: What would you do if you were on a runaway train? A train with no conductor guiding it? A train that was fast moving out of control? You’d get off, my grandmother answered. You’d wouldn't stay on to see where the train would take you. "I’m getting off," Grandma announced.

With anti-Jewish sentiment sky high and rising around the world, my grandmother would repeat something she conveyed to me when she was alive: the future of the Jewish people is in Israel.

And looking at the world today, I’d say she’s right.