Victims and Terrorists under the Same Roof 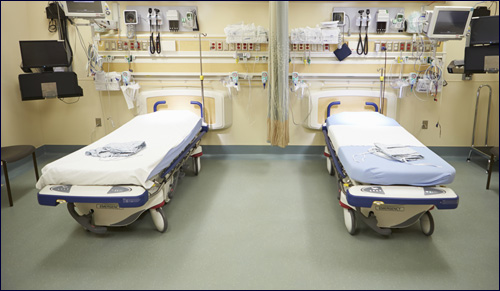 Tensions on the street spill into Hadassah Medical Center where Jews and Arabs receive the same care.

As a wave of violence sweeps across Jerusalem, victims and perpetrators are often surprised to be reunited – at each other's bedside in the city's largest emergency ward.

The Hadassah Medical Center prides itself on checking politics at the door and treating Palestinian attackers and Jewish victims alike. But the tensions on the street are increasingly seeping through the hospital's sterile walls, with family members clashing in the hallways and causing the wounded even more trauma.

Hadassah's Ein Kerem campus is considered a rare model of coexistence in deeply divided Jerusalem, with a mixed Jewish-Arab medical team working together to treat the city's wounded and infirm.

Coping with conflict is nothing new. More than 20 members of the hospital staff were either killed or lost close relatives during the last decade's Palestinian uprising. They are accustomed to separating their own feelings from the task at hand and treating those on the other side of the region's decades-old conflict.

Daniel Weiss, the chief resident of Surgery Ward A, said it was "irrelevant" whether he was operating on a victim or a wounded attacker.

"We have patients of all kinds coming in. It doesn't matter who they are. We treat them all," he said. "It's surreal, but that is the way we are. Jews and Arabs mingle and shop at each other's stores and work at each other's businesses and they lie at the hospital together."

It's a sentiment echoed by Ahmed Eid, head of surgery at Hadassah's Mount Scopus Hospital. On Monday, Eid, an Israeli Arab, operated on and saved the life of a 13-year-old Jewish boy who was stabbed in the east Jerusalem area of Pisgat Ze'ev and arrived at the hospital with barely a pulse after losing large quantities of blood.

"This is the situation and it has become very routine for us," he said. "What happens in the country also affects us but it doesn't influence our medicine. Hadassah is a very special place."

The hospital corridors are filled with women wearing traditional Muslim dresses and headscarves walking alongside ultra-Orthodox Jews and patients with Jewish kippot. But the notion of Arabs and Jews being as inseparable in the hospital as they are outside doesn't sit well with everyone.

Odel Bennett has been hospitalized at Hadassah since a Palestinian stabbed her husband Aharon to death on Oct. 3, seriously wounded her and lightly wounded their 2-year-old son Natan. The attacker stabbed another Israeli man to death before being shot dead.

The 22-year-old Bennett recalled how her pleas for help were mocked by local Arab merchants, who laughed at her and told her to "die" while a knife was still stuck in her body.

"It is very, very hard to have a victim next to someone who tried to commit murder."

When Bennett learned that a Palestinian woman who stabbed an Israeli man in the Old City several days later was being treated just four doors down the hall, she began to shake and have an anxiety attack.

"It is very, very hard to have a victim next to someone who tried to commit murder," she said from her hospital bed, where she is still recovering from 11 stab wounds. "I understand that the hospital has to take them. I just don't know why they aren't treated in prisons. That's the reality."

Her mother, Miriam Gal, was less diplomatic. Outraged that the woman's family was wandering the halls freely and that one of her relatives got into a fight with a police officer stationed there, she demanded the 18-year-old Palestinian, suffering from gunshot wounds, be moved to a different ward. The hospital ultimately agreed and moved her to a separate ward. When she was ready for discharge this week, the hospital turned her over to police.

"We are a terror-stricken family who is hurting, suffering and bereaved," Gal said, shaking. "It is disgusting and outrageous. She has no right to even live and then you put her here?"

As the Jerusalem region's major trauma center, Hadassah is usually the first stop for both sides after violent attacks. Victims and wounded attackers, often suffering gunshot wounds after being shot by police or armed bystanders, continued to file in Monday amid another spurt of violence.

Dvora Kirshenbaum, an emergency room nurse, said they sometimes end up literally lying next to each other. "We detach and treat the person we need to treat professionally without getting into emotional considerations. Everyone has their beliefs and opinions outside the hospital," she said. "That is the profession we chose."

Outside the ER, among the tense families waiting for word about their loved ones, it's not as easy. A 31-year-old Palestinian woman was brought in after she critically wounded herself and lightly wounded a police officer when she detonated an explosive device in her vehicle near Maaleh Adumim on Sunday.

The Shin Bet security agency said she yelled "God is great" before detonating a gas canister and that handwritten letters were found on her that praised Palestinian "martyrs." Her family denied the account.

"The conflict comes into the hospital but we do not allow it to overcome the ethics of the hospital."

Her brother-in-law, Walid Zreina, 49, told The Associated Press Monday that the blast was an accident and his relative was innocent. "We are a good family who has nothing to do with politics," he said.

Just then, a nearby Israeli woman angrily interjected.

"Do all the terrorists come from good homes?" 29-year-old Linor Levy asked, pointing her finger at him. "You teach your children to murder!"

Zreina shrugged and protested as the woman continued to berate him for five minutes before security broke it up and ushered the AP crew outside the building.

Later, Levy explained her rage. "My father is in there and instead of treating him they are caring for terrorists," she said. "These people come to harm us and we treat them. Would they treat us? We are too merciful."

Hospital spokeswoman Barbara Sofer said that despite such confrontations, Hadassah maintains a founding principle that has made it unique in the region. "This is an island of peace and sanity. We are post-conflict," she said. "The conflict comes into the hospital but we do not allow it to overcome the ethics of the hospital."

This article originally appeared in Israelhayom.com

How Can You Defend Israel? Part 2

The Man who Taught Me to Fly