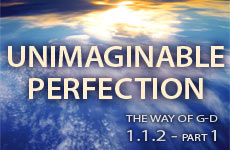 Grasping the nature of a being that is beyond our finite understanding. 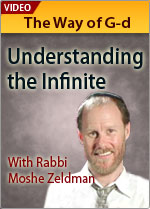 It is furthermore necessary to know that God's true nature cannot be understood at all by any being other than Himself.

The only thing that we know about Him is that He is perfect in every possible way and devoid of any conceivable deficiency.

Try imagining what existed before the moment of creation, or if you prefer, before there was a big bang. Go back to a state where there was no matter, no energy, no "stuff" – not even molecules, no laws of nature, not even space or time. Try picturing it.

What does it look like? Blackness? Emptiness? White? Fuzzy? Big? Cold?

Confused? Good. Now you're beginning to appreciate what we mean by infinite. The Ramchal's first statement above becomes immediately clear to us – we can never actually grasp the true nature of something infinite.

But at first glance the Ramchal's two statements seem to contradict each other:

(1) We cannot know anything about God.
(2) We can know that God is complete/perfect.

If we accept the logic of the first sentence, then the second sounds like a leap of faith.

The Ramchal is really just refining the definition of God. In 1:1:1, where he refers to God as "first existence, primal and eternal," that is essentially the idea of God being infinite, i.e. unlimited in every possible way. When the Ramchal writes that "God's true nature cannot be understood at all by any being other than Himself," he is saying that this infinite thing cannot be grasped or imagined. It is impossible to imagine something that has no edge, no description, no limitation. God cannot be defined because that means imposing limitations. By logical necessity, God must be undefinable and unimaginable.1 It's not that we don't know what God looks like; it's that God can't "look" like anything. If we think that God could look like something, then that being is not infinite. Only things with forms, shapes or properties can be defined or imagined.

So now we can approach the next sentence about God's perfection. When the Ramchal writes that "the only thing that we know about Him is that He is perfect in every possible way and devoid of any conceivable deficiency," he is not making a new point at all. It's the corollary of God's indefinableness. Being complete, or perfect, is just another way of saying unlimited. Calling a circle "perfect" means that it has no deviations or rough edges – nothing limiting it from being perfect. Calling a concert "perfect" implies that there was nothing lacking in the timing, the arrangements, the harmonies, etc. Similarly, "complete" is not an adjective that ascribes any positive attributes. It's an adjective that negates the idea of limitation or lacking. A "complete" meal means that nothing was missing.

The difference when it comes to God, as we'll see, is that God's perfection can't be broken down into components, like the different qualities of perfect music or a perfect meal.

We know these matters by tradition from the Patriarchs and the prophets; [in addition] the Jewish people all realized these truths with total clarity with the experience of Mount Sinai.

One way to "believe and know" these truths – i.e. that there is an infinite, perfect Being that created and continues to sustain our existence – is to look at Jewish history. On one level, we are a people whose ancestors directly experienced God through prophecy. There can be no better way to know that something is true than by direct, firsthand experience. At the same time, this method doesn't necessarily help those of us who have not experienced Divine revelation.

Since the Ramchal proposes that our convictions should be based on knowledge ("We know these matters..."), he says that in addition to the tradition we received from our ancestors, there is another stronger level of evidence: Our knowledge of God based on His revelation to the entire Jewish people at Mount Sinai.

Rabbi Yehuda HaLevy, in his famous work The Kuzari,2 argues that the claim of a national revelation is logically compelling as a fact of history that could not have been fabricated. He asks: If the Jewish people have consistently maintained this claim of a national revelation for all of our history, going back as far as we know, and even corroborated by Christian and Muslim history, then how did this claim ever originally get accepted by the nation if the event never happened?3

There are only two possibilities:

(1) Could Moses have convinced his entire generation that they experienced God at Mount Sinai if in fact they really hadn't? That would be preposterous. Even the secular Bible critics who don't believe in divine revelation don't suggest this possibility. True, it is in the realm of possibility for Moses to convince his nation that God had spoken to him alone while he was up on Mount Sinai by himself.

That type of scenario parallels the history of most religions: A charismatic leader, who's already popular and believed to have spiritual powers, comes and announces to his followers that God revealed Himself and appointed him as prophet. The claim is unverifiable (maybe He did, and maybe He didn't) and at the same time not open to disproof. So in theory it could be accepted by a people looking for something to believe in and prepared to take this man's word as gospel. (Especially since God would likely have chosen a method that could be verified!)

But it is impossible for a leader to come to a people and falsely say that God revealed Himself to all of them! The people immediately know he's lying, since they know they never experienced such a revelation. It is this type of "national revelation" that Judaism is founded upon.

(2) Another possibility is that at a later time in history, the leader tries to convince the people that God had revealed Himself to their ancestors. On the surface, this claim sounds more plausible. After all, if I tell you that I have knowledge of something that happened to your great, great grandfather, would you have any way of knowing whether or not it's true?

The Kuzari argues that it depends on the type of claim. If I claim that your great, great grandfather had six fingers on his left hand, although it may sound strange, the claim is believable. But if I told you that your great, great grandfather had three heads, you would immediately reject the claim. Why? Not because you know anything about the man, but based on the following logic: If the event were true, you would have certainly heard about it!

Now what if I argue back that although your grandfather had three heads, his family was so embarrassed that they kept him in hiding his whole life and it was a carefully-guarded family secret – and that's why later generations never knew about it.

In this sense, the claim of national revelation is different: It describes an event experienced by an entire nation of millions all at once. When the leader tells his followers, "Your great, great grandparents actually had a direct encounter with the Creator of the universe five generations ago," he is claiming that all their ancestors experienced it openly, and together. It would be like claiming to a people that all of their great grandparents in that generation had three heads. If they'd never heard such a thing, it would be immediately rejected.

The Kuzari contends that this is a rational way to conclude that the Jewish people had a direct encounter with God at Mount Sinai. In fact, because of this unique claim of national revelation, Judaism becomes the only religion in world history to even claim such a rational basis for belief. There is not one single culture, nation or society anywhere (including the approximately 4,200 religions and cults that exist) that claim any sort of national revelation as a rational basis of existence. So, explains the Ramchal, this is one key way of knowing that there is a Creator.

Believing in the Unimaginable

It sounds contradictory to say that "belief in God is logical," and in the same breath to say "logically, we have no way of imagining what God is." To answer this, we have to make a distinction in our minds between

Imagine a close friend, who would never lie to you, goes traveling to a distant galaxy. He comes back and tells you, "You'll never believe what I saw there. I saw a planet that had a totally different color than any color visible on earth." We know that on earth there are three primary colors – red, blue and yellow. Every color we can see or imagine is made of some combination of these colors. And now your friend is telling you that he saw an entirely new primary color.

Close your eyes for a moment and try to imagine the color. It's impossible. Does that mean your friend is lying? Or would you say, "My friend appears certain that color X exists, but I have no way of imagining or defining what color X is." It would be wrong to say, "Since I can't imagine the color, my friend must be lying."

We are saying the same thing about God, but in our case the point is even stronger. It's logically necessary that if an infinite being exists, it will be ungraspable, unimaginable. Since we are finite, limited beings, we can only grasp that which is finite. We are so immersed in time and space, that we can't for a moment even consider what's "beyond the edge of space," or how a being can exist outside of the whole dimension of time. Not because it's logically impossible, but because it's unimaginable.

In this respect, scientists are in the same conundrum today as believers in an infinite being. The consensus among scientists is that all of finite existence – all of space, time, matter and energy – are all within this bubble of a universe that we live in, which is constantly expanding. If we were to ask the scientist to describe what's beyond the edge of the universe, he'd be just as much at a loss for words. It is by necessity something indefinable and indescribable.

25. Holding the Branch
It Takes A Lot Of Faith To Be An Atheist
How Instagram Brought Back This Nostalgic Soup
What Makes Eli Run?
Comments
MOST POPULAR IN Philosophy
Our privacy policy