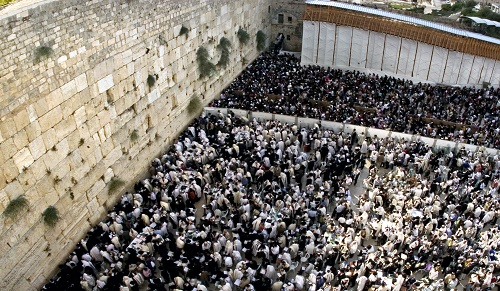 It is pointless to argue with those who happily pervert reality in the service of their profoundly held prejudices.

Is there no limit to the United Nations’ willingness to ignore every readily verifiable fact and provable source of historic truth in order to give expression to its obsessive and all-consuming hatred of Israel and the Jewish people?

The resolution passed by UNESCO last week replaces more than thousands of years of recorded history with a version of the story of Jerusalem and the site of the holy Temples of the Jews which is far more hysterical than historical. Using its majority of Arab members and joined by a cabal of countries ready to sell their conscience for the good graces of the Muslim world, UNESCO denied the deep and abiding connection between Jerusalem and the Jewish people and posited the absurd thesis that Jerusalem’s sanctity is primarily linked to its Palestinian heritage. The Temple Mount itself, according to UNESCO, may now only be referred to by its Muslim name as al-Haram al-Sharif, Arabic for the Noble Sanctuary – a name which ignores not only its sacred history for Jews but its profound meaning for Christians as well.

UNESCO has been overtaken by history revisionists and anti-Semites whose obvious hatred for Jews is so strong that they refuse to acknowledge the facts and the truth right in front of them.

Special United Nations Envoy for the World Council of Independent Christian Churches Laurie Cardoza-Moore said, “This resolution is worse than Holocaust denial, as it questions the very existence of the Jewish people. UNESCO has been overtaken by history revisionists and anti-Semites whose obvious hatred for Jews is so strong that they refuse to acknowledge the facts and the truth right in front of them.  By refusing to recognize the Jewish people’s historic and biblical connection to the Temple Mount, UNESCO has denied the very foundation of our Judeo-Christian faith.”

Prime Minister of Israel Benjamin Netanyahu put it well when he responded to the ludicrous UN- approved document, agreed to by ostensibly “enlightened countries” like France, Spain and Italy, with the analogy that “To say that Israel has no connection to the Temple and the Western Wall is like saying that China is not connected to the Great Wall of China or that Egypt has no connection to the pyramids.”

But what I think is a far more important lesson to be learned from the passage of this resolution is its relevance to the error of the Western mindset which continues to believe in the power of facts to shape the current of modern political reality and the strength of reason to moderate Islamic extremism.

Mohammed was born in the seventh century. Yet Palestinians see no logical inconsistency in proclaiming themselves as the original and sole sources of sanctity for a city chosen by David as capital of Israel a thousand years earlier, designated by David’s son Solomon as site for the first Jewish Temple, and rebuilt and renewed by their descendants when they returned from their exile in Babylon hundreds of years before the common era.

It is pointless to argue with those who happily pervert reality in the service of their profoundly held prejudices.

Just last week, the very same week when we were treated to UNESCO’s rewriting of history, we were treated to but one more stupefying example of “hysterical revisionism.”  Israel Radio reported that an Iranian cleric claims the “irrefutable truth” that Albert Einstein, the great 20th century scientist who developed the Theory of Relativity, was actually a Shiite Muslim.

In a video featuring Ayatolla Mahadavi Kani, identified as the head of the Assembly of Experts in the Islamic Republic of Iran, the Ayatollah says that there are documents proving the Jewish scientist embraced Shiite Islam and was an avid follower of Ja'far Al-Sadiq, an eighth-century Shi'i imam. In the video, Kani quotes Einstein as saying that when he heard about the ascension of the prophet Mohammed, "a process which was faster than the speed of light," he realized "this is the very same relativity movement that Einstein had understood."  The ayatollah adds: "Einstein said, 'when I heard about the narratives of the prophet Mohamad and that of the Ahle-Beit  [prophet's household] I realized they had understood these things way before us.'"

Our efforts grant bizarre and irrational viewpoints a kind of legitimacy they do not deserve - as if our response to disciples of the “earth is flat” notion requires respectful debate.

And so of course Jews really had nothing to do with the sanctity of Jerusalem as well as the genius of Albert Einstein – a truly stunning theory of relativity.

All of which is why I’m convinced we are wasting our time when we respond to these obvious falsifications with reasoned replies. Our efforts grant bizarre and irrational viewpoints a kind of legitimacy they do not deserve - as if our response to disciples of the “earth is flat” notion requires respectful debate.

The UNESCO document is so outlandish in its conclusions that it ought simply to be branded for what it is without further discussion – another racist and anti-Semitic product of an organization so committed to irrational hatred of Israel and the Jewish people that it has lost any justification for its continued existence.