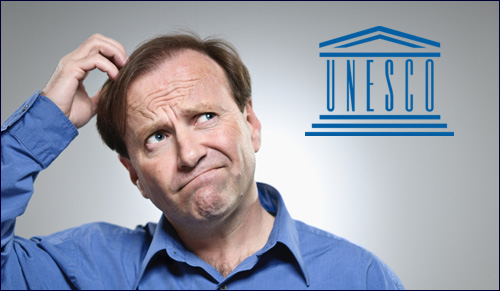 Any travel to or from Washington, D.C., will require passports and vaccination records.

The United Nations Educational, Scientific and Cultural Organization (UNESCO) is a specialized agency of the United Nations (UN) based in Paris. Its declared purpose is to contribute to peace and security by promoting international collaboration through educational, scientific, and cultural reforms to increase universal respect for justice, the rule of law, and human rights along with fundamental freedom proclaimed in the United Nations Charter.

But in a 24-6 vote, UNESCO has adopted an anti-Israel resolution that disregards Judaism's historic connection to the Temple Mount and casts doubt on the link between Judaism and the Western Wall.

China must scrap Beijing, choose a smaller town as its capital, and launch its own program to “Make China Great Again”.

Prime Minister Benjamin Netanyahu slammed the vote stating: “The theater of the absurd continues at the UN.”

Lest one think UNESCO is unfairly singling out the Israel, because, it’s the Jewish state (of course they wouldn’t do that), UNESCO has developed several other proposed resolutions along similar lines. I have summarized some of the more controversial ones below.

UNESCO had been just fine with leaving Washington, D.C. alone until a secret plot was revealed to change the name of the city to Trumpington, D.C. “That’s where we draw the line,” explained a UNESCO spokesperson who spoke on the condition of anonymity. Instead, UNESCO is suggestion that Philadelphia replace D.C. as the American capital, seeing as though that was where the Declaration of Independence was signed. If the new resolution passes, any travel to or from Washington, D.C., will require passports and vaccination records.

The disadvantages of Parisian life are numerous and offensive to the rest of France: the excessive cost of living; the dirt; the beggars, scam artists and pickpocketers; the tourist invasion; the rudeness; the small and ugly airport; overcrowding and continuously busy; and frequent city service strikes and demonstrations that bring the city to a standstill. One might conclude from all this, as did UNESCO, that France would be better off without Paris. Ooh-la-la! Let the search begin for a new City of Love!

This one makes sense. The citizens of Moscow are obviously the most accident-prone people on earth. They are constantly succumbing to accidental disappearances, poisonings, falls out windows, and self-inflicted gunshot wounds. The fact that they’d all previously ticked off Putin is merely coincidental. These klutzes are simply not good role models for the remainder of the Soviet Union, much less the remainder of the world.

Okay, better you hear this from me than out on the street: South Africa has three different capitals. No, this is not a joke. Pretoria is the administrative capital. Cape Town is the legislative capital. And Bloemfontein is the judicial capital. Three different capitals? Really? It’s confusing, wasteful, and its only advantage is as a mildly interesting answer on “Jeopardy”. UNESCO proposes, therefore, that South Africa wipe the slate clean and start over, choosing one city, and one city only, as the capital. How about Benoni, the birthplace of actress Charlize Theron. Works for me.

Beijing is an ever-changing megacity rich in history but also truly modern, exemplified in its global influence in politics, business & economy, education, history, culture, language, music, sports, architecture, civilization, fashion, art, entertainment, innovation and technology. Obviously, in this era of “America First”, Beijing is a major threat to U.S. dominance. China should therefore start over, choosing a small town as its capital, and launch its own program to Make China Great Again.

Perhaps it is not difficult to understand, in this current conservative, politically correct climate, why UNESCO would take issue the capital of The Netherlands containing the word “dam”, but there it is. They briefly considered proposing a change to “Amsterdarn”, but could not garner enthusiasm for it. Anyway, when you factor in the dikes, the easy access to free marijuana, and the clunky wooden shoes – disrupting the connection to Amsterdam was a virtual no-brainer.

And speaking of no-brainer, I hereby salute UNESCO for its fine, fine work.