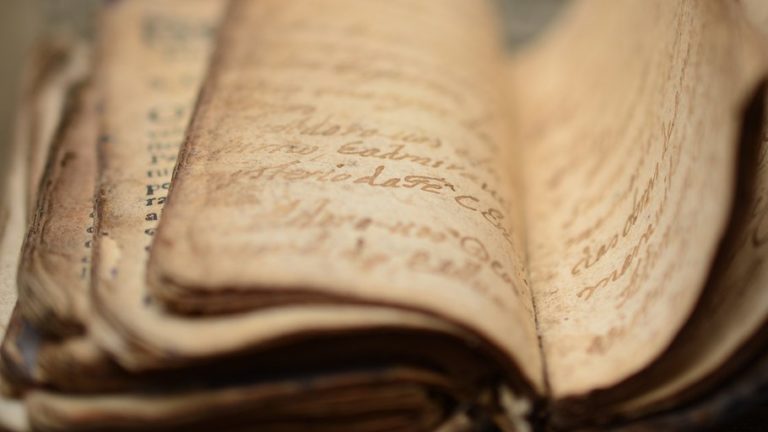 Concealed in a butcher shop, (underneath a pile of chicken gizzards) a small tattered, gravy stained journal (containing handwritten pages authenticated by experts who study old, heavily bearded male characters who’ve been cheated out of marriage) has been released to the general public and may serve to rewrite history as we know it.

Dear Diary, Last month I moved to Anatevka to make a fresh start as a bachelor butcher after an E coli scare ruined me in the last town. Already my luck has changed here with Tevye’s eldest daughter…. Tzeitel. She comes in my shop every Thursday and glances at me over the turkey giblets. Wow. What a looker! Who cares if she’s only the daughter of a poor milkman with no dowry? Whatever Yente brings, she’ll take! Right? Of course right!

Tonight after a hilarious mix-up when Tevye thought I wanted to buy a little cow to keep me company, (I guess you had to be there!) we shook hands and drank on our agreement. But more importantly we sang “To Life!” which served to seal the deal. We raised a glass and sipped a (few thousand!) drop of Schnapps and danced in circles until we bumped into the others in our village who make a much bigger circle. But we don’t bother them and so far . . . they don’t bother us. Life has a way of confusing us, blessing and bruising us. But nothing matters anymore except for my Tzeitel, (not the Tzar’s Tzeitel!) who is very enthusiastic about marrying me because of her large appetite. Like Tevye said, “With a butcher, surely my daughter will never know hunger.” And won’t she be a lucky bride? I’m handsome and tall -- that is from side to side!

Things are not looking so rosy today after I recovered from my hangover. It seems Yente is insisting I pay a hefty shidduch fee. I also found out Tevye only wants me as his machatunim when he has something to slaughter. He thinks you can have a fine conversation with me . . . if you talk about kidneys and livers. And to add insult to injury – he said he always wanted a son, but he wanted one a little younger than himself. Hmmph! But the real reason I need to find out a way to back out of this wedding is because the entire village is buzzing about Tzeitel wanting to have my baby. Oy! What was I thinking letting her flirt with me? I’m too old for all that stroller, diaper, and spit-up mishagoss.

Wonder of wonder, miracle of miracles! I’ve got it! The answer to all my engagement woes is staring me in the face sure as my butcher’s apron, sewn by that poor skinny tailor, Motel Kamzoil. That’s right. I’ve thought of an ingenious way to palm off Tevye’s firstborn daughter onto the tailor! It’ll be a perfect fit, like a glove, made to measure! Plus they’ve played together since they were children. From such children come other children. It’s a foolproof idea and I’ll tell you more tomorrow because right now everyone is crowding around me fighting over shank bones. Nothing makes a butcher more popular than Passover! Try finding a roasted lamb leg in Costco.

Dear Diary, so here’s my plan to extricate myself from marriage. I’ll have my dearly departed wife Fruma Sarah, (who by the way owes me big time after all the pearls I’ve bought her, but may she rest in peace after doing me this one last favor!) pay a visit on Tevye and scare him during a bad dream. Hmmm, what can she say to him? I know! She’ll threaten if Tzeitel marries Lazar Wolf, she’ll pity us both. She’ll give it three weeks and when three weeks are up, she’ll come to her by night and take her by the throat and . . . oooohhh this is just too good to keep to myself! Think of all the situations people can manipulate just by having deceased relatives come back from the other side issuing ominous warnings!

Everything would be totally fine if only that Motel, that stitcher, that nothing, could just have a little more self-confidence. I’m gonna teach him that famous catchphrase, “Even a poor tailor is entitled to some happiness!”

Wow. I really thought I could put this whole mess behind me, Diary but tonight proves it’s gonna be difficult. To demonstrate what a good sport I am, I attended their wedding ceremony and sat through a ridiculously long melancholy melody the parents of the bride sang while lamenting, “Is this the little girl I carried? Is this the little boy at play? I don’t remember growing older, when did they?” Sheesh! You’d think the sun rises and sets with their offspring!

After the reception (but before everyone got too crazy dancing with glass bottles on their heads…and no, they don’t use Velcro!) Tevye shouted at me for all the guests to hear, “And you can keep your diseased chickens!” This is the thanks I get for bringing a prestigious poultry present to show I had no ill will? Yep, you guessed it dear diary; salmonella rumors have started to circulate. Tevye has officially destroyed me with his lashon hora. But mark my words -- he’ll rue the day he crossed this rich man’s path. Money may not buy happiness, but it can purchase plenty of revenge.

Did I ever mention I have a nephew named Perchik who’s kind of a wild man, a revolutionary of sorts, okay he’s a complete radical! Looks exactly like Starsky from Starsky and Hutch. I think I’ll slip him a fifty to take Tevye’s middle daughter Hodel, far from the home she loves. That oughta teach Tevye to mess with me.

Still no apology from Tevye for ruining my livelihood. I could hire one of these dashing gentile gents to woo his little Chavele to marry outside of her faith. Then if he tries to bend that far, he’ll break. Nah, even I couldn’t stoop that low.

Dear Diary, well it’s another fresh start, this time in Chicago, America. And guess what? Yente and I are husband and wife. We’re the same age and with the way she talks and the way I hear, it’s a perfect match! Plus I’m hanging up my butcher knife forever because we’ve started a new online business called Jdate. I wonder if it will be successful?