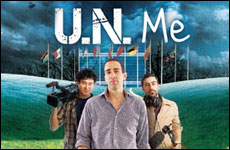 A new hilarious documentary that reveals the insanity of the U.N.

Investment banker Ami Horowitz wanted to do something to help Israel. So he decided to quit his job and make a movie where he ignored Israel completely. Yes, you read that right. His film is called U.N. Me and is described as “one man’s outrageous journey to expose the corruption of the world’s most revered institution,” and despite the subject matter, Israel is never discussed.

One man’s outrageous journey to expose corruption in the world’s most revered institution.

Ami Horowitz grew up in Los Angeles, in a traditional but not religiously observant home. His parents sent him to yeshiva day school and over time he became Orthodox. After college, he moved from Los Angeles to New York and for 14 years was an investment banker – most recently specializing in working with Israeli start-up companies. But one day Horowitz decided that he needed more.

“It’s no secret that the UN is one of the most damaging institutions on the planet when it comes to Israel,” Horowitz relates, “and we Jews have done a bad job combatting it. But look at the atrocities that the UN has facilitated in places like Rwanda and Sudan. It does damage around the globe and I decided that this is something that needs to be exposed.”

With the message determined, the medium was not far behind. One day Horowitz was watching Bowling for Columbine, a film by documentarian and provocateur Michael Moore. That’s when Horowitz had his self-described “epiphany.” As he explains it, “In life you are presented with things you can’t afford to do and things you can’t afford not to do. I couldn’t afford not to make this movie after I came up with the idea. I knew that if I didn’t, I would regret it for the rest of my life.” So Ami Horowitz quit his job as an investment banker, raised money, hired a crew of academy award winning writers and producers, and his film U.N. Me is the result. And a fine result it is.

In U.N. Me Horowitz systematically documents some of the egregious abuses that the United Nations has perpetrated around the world. He highlights the ineptitude of UN Peacekeeping forces in places like the African nation of Cote d'Ivoire where “Peacekeepers” were accused of raping local citizens and even shooting and killing peaceful residents who were protesting their presence. He discusses the tragic Rwandan massacres where approximately one million ethnic Tutsis were massacred by their Hutu countrymen while UN Peacekeepers, who could have prevented the bloodshed, basically sat on the sidelines and watched.

He covers the current tragedy in Darfur where the Sudanese sponsored Arab Janjaweed militias are systematically killing their non-Arab countrymen, and how the UN has done nothing about it, even blocking a report by Nobel laureate Jody Williams to the UN Human Rights Council. And of course, U.N. Me documents the UN’s dithering on the Iranian nuclear program, where 80% of the International Atomic Energy Association’s (IAEA) $380 million dollar annual budget is incomprehensibly spent on three countries – Canada, Germany and Japan (?!), while Iran is able to march towards a nuclear program unabated.

My decision was that in order to help Israel I needed to ignore it.

Horowitz had good reason for leaving Israel off the list of topics to be covered in the film. He explains, “Not mentioning Israel was a very difficult decision for me. Every fibre of my body wanted to highlight the damage the UN does to Israel. But my decision was that in order to help Israel I needed to ignore it. Unfortunately, Israel is controversial. If Israel was the topic of the film, the discussion would turn to Israel. But my strategy was that if I highlighted the ineptitude of the UN, then perhaps fair minded people would question the UN’s judgement the next time the UN singled out Israel for something unfair and arbitrary.”

With the gravity of the subject, one would expect U.N. Me to be a somber piece of investigative journalism. The reality however is quite different. The film is often amusing, at times uproarious and this is usually thanks to Horowitz – our on camera guide through the bizarre world that is the United Nations. For example, Horowitz is somehow able to obtain an interview with Daffa-Alla Elhag Ali Osman, Sudan’s ambassador to the United Nations, who blames drought and climate change for the killings in Darfur. “So maybe the Prius is the answer to all our problems there,” Mr. Horowitz offers.

Later, when Horowitz is interviewing UN disarmament chief Sergio Duarte he asks sarcastically, “How are we supposed to know if Iran’s true intentions are to use nuclear weapons aggressively. Only God knows that,” to which Duarte responds, “Exactly.” Then for good measure Horowitz adds, “Or anyone who reads.”

According to Horowitz, the comedic style was intentional. “I went into this to make entertainment first and education second. It sounds inverted but no one wants to see a 90-minute diatribe on the UN. To make it successful, you have to do it through entertainment and comedy. That’s why we spared no expense, hiring comedy writers from Michael Moore, The Daily Show and The Onion. It was a top-notch comedic team and I think it paid off.”

While the monetary payoff from the film is yet to be determined, Horowitz sees a spiritual payoff of sorts. “I am an orthodox Jew,” he says. “Everything I do is influenced by Judaism and there’s no question that I would not have been able to take on this herculean task if it wasn’t for my religious imperative.”

Reflecting on his monumental project and the decision to make a movie to help Israel without even mentioning it, Ami Horowitz concludes, “The world is definitely crying out for this film, but if it wasn’t for Israel, chances are I wouldn’t have made it.”

A Bag of Marbles: A New Holocaust Film Worth Seeing

Zacharia’s Beautiful Mystery
Why Are The Prayers Of Yom Kipur So Repetetive?
Ha'azinu 5783: A Time for Unity!
Twisted Thinking
Comments