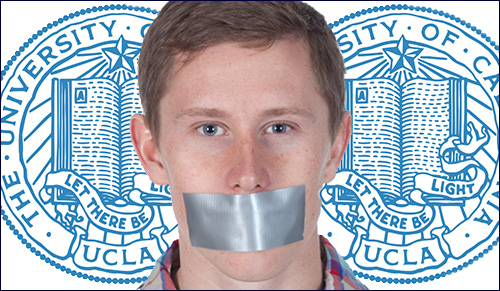 We need to stand up against attempts to bully and intimidate pro-Israel students on campus.

Student government elections were recently held at UCLA. One would think that the main issues being discussed would focus on tuition rates, student group funding and safety issues on campus, but at UCLA the elections were dominated by a different topic: Israel.

During the elections, anti-Israel students and organizations publicly attacked candidates for participating on the Hasbara Fellowships program to Israel, as well as other programs to Israel organized by pro-Israel and/or Jewish organizations. Hasbara Fellowships brings hundreds of students to Israel each year, giving them an in-depth, first-hand view of the political, strategic, cultural and societal issues in Israel. Students gain the knowledge to return to their campuses as educators about Israel, organizing programs and other initiatives to provide the campus with a more accurate portrayal of the Israeli people, as opposed to the misleading and exaggerated view often communicated by Israel’s detractors.

So what does this have to do with UCLA elections? Acording to anti-Israel students and organizations on campus, any candidate who has participated on Hasbara Fellowships or other named educational programs to Israel, is unfit to represent the UCLA student body. They demanded that all candidates sign a pledge to avoid participating in these programs in the future.

Pressuring candidates to sign this pledge was clearly an attempt to bully and intimidate other students for their political beliefs. It is telling that these groups only targeted pro-Israel and Jewish organizations. This demonstrates that they have no interest in advocating for transparency in student government or any other issue pertaining to the well-being of the general student body. The fact that they only targeted organizations and students that disagree with their political positions clarifies what their true intentions are – to intimidate and bully those that disagree with them.

Additionally, it is offensive that they are publicly stating that intelligent UCLA students lack the ability to think for themselves. Just because one attends an educational program does not mean the individual loses their ability to think critically and act independently. All academic institutions and environments should encourage their students to participate on educational programs and opportunities, not bully and intimidate them into avoiding these opportunities.

Finally, it is laughable that these organizations make accusations against Hasbara Fellowships and other programs for their content and viewpoints. Israel and the world is facing a dangerous ideology of extremist Radical Islam. Radical Islam has caused terrorism and violence across the globe including today in Nigeria, as well as in New York, London, Madrid, Tel Aviv and beyond. It is crucial to educate our program participants and others about this global threat. The fact that these UCLA students and organizations object to this perspective and libel anyone who does speak out about these issues says a lot about what they support and believe in.

It is imperative that students on campuses be supported in their quest to gain a deeper understanding of what is happening in Israel and in the world in general, and any efforts to intimidate students from participating in these opportunities should be revealed for what they truly are – partisan bullying.

BIO: Rabbi Elliot Mathias is the Founder and Executive Director of Hasbara Fellowships, a leading pro-Israel advocacy organization that educates, trains and supports students across North America. Over 3,000 students have participated on Hasbara’s advocacy training program in Israel. www.hasbarafellowships.org

We Have Lost A Father