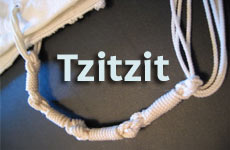 How to gain some meta-physical "fringe" benefits.

Tzitzit are tassels that hang down from the four corners of a rectangular garment, as the Torah says: "You shall put fringes on the corners of your garments."1

Why do we wear Tzitzit? The Torah explains that by doing so, "you will see it and remember all the mitzvot."2

How do the tzitzit remind us of the mitzvot? On the simple level, Tzitzit serve as the colloquial string-around-the-finger reminder.3 As we go about our daily chores, whether at work or at a ball game, Tzitzit give us an anchor to the world of spirituality.

Further, the numerical value of "Tzitzit" is 600. Add to that the 8 strings and 5 knots on each corner, and you get 613 – the number of mitzvot in the Torah.4 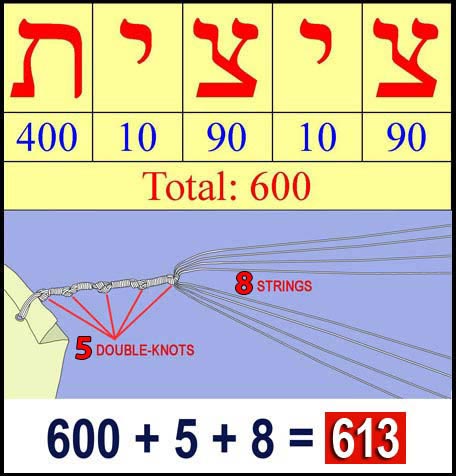 Let's delve a bit deeper into the verse: "You will see it and remember all the mitzvot." If there are four strings on each corner, why does the Torah use the singular form "it"?

"It" refers to the single blue thread on each corner prescribed by the Torah.5 The color blue is similar to the sea, which is like the clear blue sky, which is the color of the God's "heavenly throne."6

Our challenge is to make spirituality a part of daily reality. In seeing the Tzitzit, we have a tangible reminder of an incorporeal God.7 Seeing God in our lives is a progression – from recognizing his presence in mundane things like a garment, all the way to the spiritual realms ("heavenly throne").

In this way, Tzitzit has a meta-physical "fringe" benefit (pun intended), in helping to safeguard one from temptation.8 The Torah tells us: "And you will see them, and remember not to follow after your heart and eyes, that you stray after them."9 Tzitzit remind us that God is watching, and our actions should reflect that realization.

The Talmud10 tells of a man who was intensely addicted to a dangerous vice and was willing to spend any amount of money to satisfy that desire. One time he traveled across the world, and at the moment before the forbidden activity, the man's Tzitzit "slapped him in the face." The commentators11 explain that the Tzitzit struck him not literally, but psychologically – with the four corners appearing as witnesses against him. 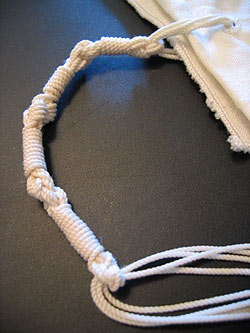 On each corner, four strings are looped through a hole, and drape down on both sides, giving the appearance of eight tassels per corner.12 The upper one-third of the tassels are a series of five double-knots, separated one from another with four sets of windings. Below the bottom knot, the remaining two-thirds of each string hangs loosely.13

The hole on each corner should be about two inches from the edge,14 to fulfill the biblical requirement that it be on the garment's "corner." If the corner tears, it can usually be repaired.15

The strings must be made either from wool, or from the same material from which the garment is made.16 Each string actually consists of two threads twisted together, and must be spun especially for the sake of Tzitzit.17 Therefore one should buy Tzitzit that carry a proper rabbinic supervision.

Once you've purchased the strings, it's not so difficult to attach them yourself. It's fun and meaningful. The process of putting Tzitzit on the garment is as follows:

Note: The Sefardic tradition differs, in that the shamash "spirals" the cords with four sets of wraps, separated by double knots in a 10-5-6-5 tie pattern.

Although a Tallit Katan is worn underneath the shirt, there are different customs as to whether or not the tassels should be left hanging out and visible.20 Given the purpose of Tzitzit, it is considered better to wear them "untucked" so that we can look at them often and use them as an anchor. However, if this would cause embarrassment or dissent when living amongst non-Jews, it is acceptable to have the strings tucked in.21

What if one or more of the strings break?

Our custom is that each string, when originally inserted, should be a length of 24-28.8 cm.22 If thereafter a string should be cut or broken, then it will depend:

If the break is within the section of knots-and-windings, then according to most opinions the Tzitzit are invalid.23

If the break is in the part where the strings hang loosely, then even if there is a break all the way up to the windings, it is still kosher.

If there are two breaks, then we must determine whether or not these are two ends of the same string, given that each string was initially inserted into the hole and doubled over.

How can we know whether or not these are two ends of the same string?

Firstly, when initially tying the knots on the Tzitzit, one should ensure that the two ends of any given string are always on opposite sides of the knot. Thus in the event that two strings break:

If there are three broken strings, then ki'day aniva is not sufficient. Rather, you will need a full-length string, since we require at least two complete strings, and there is a concern that these three ends may be of three different strings, leaving only one complete string.25

View a slideshow: "Common Cases of Broken Strings in Tzitzit." 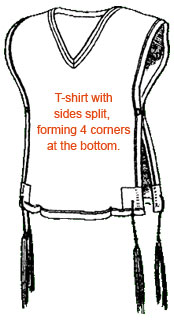 Two articles of clothing are made for this purpose: the Tallit Katan (the small cloak) and the Tallit Gadol (the large cloak).

The Tallit Katan usually consists of a simple, white rectangular garment with a hole in the middle for the head. For an adult, this should be at least 18 inches long on each side (i.e. 18 x 36 when unfolded).28 It is kept on all day long, and is generally worn underneath one's regular shirt. It need not be worn at night.29 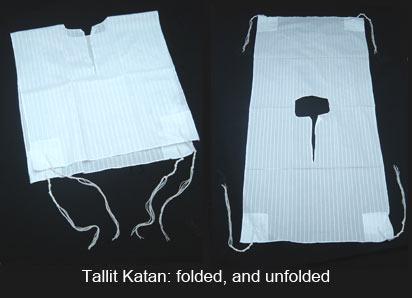 Those who will not be wearing a Tallit Gadol later30 (see below), should recite the following blessing upon putting on the Tallit Katan:31

When a Jewish boy turns three, he should be presented with his own Tallit Katan.32 This way, he will become accustomed to this important mitzvah from an early age. 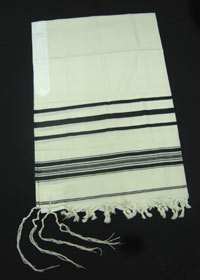 The Tallit Gadol (often called tallit, for short) is a large white cloth with no hole in it. It is made to be worn specifically during morning prayers (hence the term "prayer shawl"). The idea of wearing a special tallit during prayer is because we mention the Torah commandment of Tzitzit during a focal point of the prayers, the Shema.

The cloth usually has black, white or blue stripes.33 Ideally, it should be made from pure wool.34 The tallit is worn draped over the shoulders, with two corners in the front and two in back.35 An average size tallit is 4x6 feet.

[A scarf does not require Tzitzit, because it does not have the minimum size.36 Similarly, the small, fringed scarves that people sometimes wear around their necks do not qualify as a tallit and are not a fulfillment of the mitzvah.37]

On days when tefillin are also worn, the tallit is put on first.38

Before donning the Tallit Gadol, one should check the strings to see that they are not tangled39 or torn.40

For the Tallit Gadol, the following blessing is recited41 while standing.42 One should have in mind to include the Tallit Katan in the blessing.43 One should also intend that the wearing of Tzitzit is to remind us of all the mitzvot.44

Immediately after reciting the blessing, the Tallit Gadol should be draped over the shoulders and then temporarily wrapped around the head while its end is thrown over the left shoulder. The reason for throwing to the left is because we want the tzitzit to protect us against the desires of the heart, which is tilted to the left, as is written in Numbers 15:39.45

We then straighten out the tallit, so that two tzitzit are in the front and two in the back; two on the right and two on the left. We are thus surrounded by the mitzvah of tzitzit.46 Since the blessing is "to be wrapped in tzitzit," this would not be fulfilled by wearing it like a scarf.

Afterwards, the tallit may be left resting just on the shoulders in a cape-like fashion. Some people keep it over their head for parts of the morning prayers,47 as a way to increase concentration and to give a feeling of being enveloped by God's presence.

The tallit must be treated with respect.48 Therefore, one should try not to allow the strings to drag on the floor.49 Also, since the Tallit Gadol is designated for prayer services, it should be taken off before entering the bathroom.50 It is permitted to wear a Tallit Katan in the bathroom.51

After the morning prayers are complete, the Tallit Gadol is removed.

There are different opinions as to when a boy should begin to wear a Tallit Gadol. In some communities, boys begin at age 13; in other communities, they begin upon getting married.52 Everyone should follow the customs of his community.

Women have traditionally not worn Tzitzit. Here's why:

The Torah says that of the four threads at each corner, one should be of "techeilet."55 Techeilet is a blue dye made from the blood of the chilazon,56 a sea creature found on the coast of northern Israel.

Why don't we use the blue thread today? This particular blue dye was very precious and because of its value, the Romans (who conquered Israel in 63 BCE) decreed that only "blue-blooded" royalty could wear the color techeilet. This caused the Jewish dyers to go underground. By 639 CE, at the time of the Arab conquest, the secret of techeilet was lost all together.

It is interesting that the series of stripes (usually black or blue) on just about every Tallit Gadol may have their origin as a reminder of the "strand of techeilet" once worn as part of the Tzitzit.57

In the late 19th century, a massive international search was made to rediscover the original chilazon, the snail used to make techeilet. Since then, several species of snails have been suggested by researchers, but much controversy remains about the matter. Today, while some scholars advocate the wearing of "techeilet strings" from these snails, most scholars remain unconvinced. Consequently, most observant Jews wear only white Tzitzit.58 The Tzitzit are still fit for use, even if they are all white, without the blue string.59

Finally, let's end with a joke:

Shlomie decided to try out the new Chinese cleaners in town. He brought in his tallit to be cleaned. When the time came to pick it up, he was stunned see a bill for $105 dollars.

"Why so much?!" Shlomie exclaimed.

"Five dollars to clean the garment," said the man, "and 100 dollars to get out all those knots!"

Women and Mitzvot in Judaism