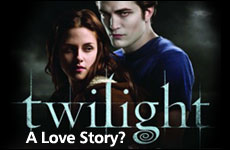 The Twilight Saga has taken teenage girls everywhere by the throat. Pun intended.

"People don't want to just read Stephenie Meyer's books; they want to climb inside them and live there," wrote Time magazine, adding, "[Fans] dress up like her characters. They write their own stories about them and post their tales on the Internet. When she appears at a bookstore, 3,000 people go to meet her. There are Twilight-themed rock bands."

If you haven't heard of The Twilight Saga, then for the past six years you have have managed to avoid contact with all females between the ages of nine and 19. Teenage girls wait days to catch a glimpse of the movie-adaptation actors. They pull out their hair. They scream and cry. They hoard merchandise ranging from the chintzy Twilight-themed school supplies, room decorations and clothing, to the downright bizarre. Twilight-themed tattoos, shower curtains and cookbooks are just the beginning.

Twilight-themed school supplies and cookbooks are just the beginning.

Beyond its corporate identity as an outlandish marketing phenomenon, blockbuster film, and publishing explosion (over 100 million books sold), Twilight has also reshaped the sensibilities of a generation. I grew up under the pounding brand waterfall of "Girl Power!", the slogan of the first of many neon-wearing, skin-flaunting girl bands to catch the pop-psychology female-empowerment wave that began long ago with characters like Rainbow Brite, Jem and the Holograms, and even Strawberry Shortcake. Right around when I turned 12, Rainbow Brite suddenly grew up and girls my age grew up with her.

Today, the same kids who dreamed of going to elementary school at Hogwart’s now dream of going to high school in Forks. But Twilight seems to touch a deeper nerve. Behind the obsession with vampirish good looks, Twilight grabs at a stray chord in the heart to play something so vivid and haunting that girls won't let go.

Why the obsession? What chord hath been strummed?

I admit, I like Twilight. Guilty as charged. I couldn't put the books down.

But then I read another book a few months later that put the Twilight phenomenon into much clearer perspective. Called Reviving Ophelia: Saving the Selves of Adolescent Girls, quoted a study conducted in Rhode Island in the 1990s:

Teens were asked to respond to questions about the circumstances under which a man “has the right to have sexual intercourse with a woman without her consent.” …At least eighty percent of these teenagers didn't know that a man never has a right to force sex.

She goes on to depict the daily sexual harassment and pressure teenage girls suffer as they walk the gauntlet that begins around fifth grade and ends, hopefully, after college. Her depictions of interviewees read like war stories except for the fact that these are the typical experiences of young women growing up in America. The teasing. The blackmail. The gossip. The labeling. To say nothing of the rape and date rape that is now documented to harrow the lives of one in four women in America today. The depression, cutting, suicide attempts.

This is what counts for normal growing up in today's generation? "Girl Power" wasn't the half of it. Today's pop culture has become a morass of barely disguised pornography masquerading as the natural next step after The Disney Channel. Think Britney Spears and Miley Cyrus, stars so aggressively vulgar that the Spice Girls look chaste in comparison.

Enter Twilight. Stephenie Meyer, a stay-at-home mom in Utah, inadvertently started a revolution. Teenagers sick of being used as pawns in advertising's lowest-common-denominator manipulations woke up to the themes of Twilight, took a mass breather, and it changed them.

The Power of Ahava

What are these oh-so-powerful themes in Stephenie Meyer's oh-so-successful Twilight? One word: love. Twilight is a love story. There really isn't much more to it.

But not love the way the American advertising industry defines it. Love a lot more like the way our Jewish tradition defines it. Love, in Hebrew, is ahava: literally, I will give. I will take care of you. I will make personal sacrifices for your wellbeing. I will do whatever it takes, go to whatever lengths, to give you everything I possibly can. That's love. That's ahava. Ahava doesn't compromise, or lose faith, or become blinded by passing seductions.

The real secret, teaches Rabbi Eliyahu Eliezer Dessler in his famous Strive for Truth, is that the wonderful feelings of fulfillment and happiness that we all long to experience – the bliss and magic of love – come about not through getting but by giving love. When we open our eyes to the person standing in front of us and move our hearts to care for them (care being an active verb), we feel love. Our hearts flood with something wonderful and indescribable. We experience connection of the most profound human experience.

The best part is that the more we give, the more we love. We can tap into this power at any time. There is nothing more noble or more beautiful.

Of course, nobody ever said it was easy. Just as it does for all of us, love forces Bella and Edward to make a large number of very tough choices, moral dilemmas that revolve around the central themes of our human lives: immediate gratification vs. altruistic, long-term commitment. The body vs. the soul. That this is played out under the extreme circumstances of werewolves and vampires makes it more fun, but, ironically, no less relatable.

Will you choose to become a member of the Volturi, the evil vampires who feast ruthlessly and elegantly on human blood, or will you choose to be a member of the Cullen family, the vampires who overcome their powerful desires by satiating themselves on animal blood instead? Will you fight hard for revenge like Victoria, or for kindness like Carlisle?

How far will you go for the one you love? Will you risk your life? Will you give up everything to change in fundamental ways? Rabbi Lawrence Kelemen says that the purpose of marriage is to tell your partner, in word and deed, "I am here to make your dreams come true."

Young women around the world want to know what will happen to Edward and Bella because they matter. Their values matter. Sure, there's violent danger to Bella's life at regular intervals, the Cullens have to up and fight some bad guys, and Bella waffles a bit between her best friend, the werewolf, and the love of her life, the vampire. But at the end of the day – please excuse the unabashed sappiness – it's the fact that Bella and Edward just love each other so much that keeps the story going. Will love win?

Twilight has given an entire generation a mental picture of what it looks like to choose heroism over fear, true greatness over superficial power, love over lust and exploitation. Sick of the alternative, teenage girls from New Zealand to Japan to the United States are latching on with the thirst of a vampire. Against all odds, they believe that love really does conquer all.

They’re right. By choosing ahava again and again, we can create our own happy endings.

Braha Bender serves as a branding, public relations, and media strategist with Mishpacha Magazine, as well as providing boutique personal and business coaching services to highly motivated clients. She lives in Jerusalem with her family.

Sidney Poitier and the Jewish Waiter who Taught Him How to Read
Near Death Experience Panel
The Western Wall: The Heart of the World
Ask the Right Question: Tisha B’Av
Comments
MOST POPULAR IN Jewlarious
Our privacy policy
Aish.com Is Looking for Great Writers