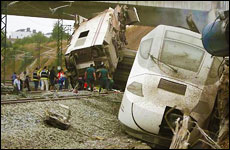 Sometimes our reckless behavior causes life to go off the rails.

The experienced train driver with a passion for speed was arrested yesterday in his hospital room in northwest Spain. Investigators are still examining the reckless behavior that resulted in a train wreck that killed 80 people and injured dozens more last Wednesday. The driver, Francisco Jose Garzon, had bragged last year on his Facebook page that he had topped speeds of 200 kilometers or 124 miles per hour. Francisco also wrote about his dream to go even faster on the now deleted page. The black boxes from the crash have been found and may help explain why the train went flying off the tracks on a turn as it was nearing Santiago de Compostela at twice the speed limit.

One man's desire for speed seems to be the cause of this tragedy. 80 people have lost their lives because Francisco wanted to go faster than 124 miles per hour. He wasn't trying to kill anyone, but his reckless actions ended up killing dozens of people. The most frightening thing that struck me as I read the story was the realization that it could have happened to me.

I can still remember the day I passed my driving test when I was 16 years old. I received a pink slip saying that I passed, and then I set about picking up four of my closest friends to show off my new driving skills. I don't know if I was going too fast or turning around to speak to my friends when I was supposed to be looking at the road – I don't really remember. But I was fortunate that when I crashed into the car in front of me, no one was hurt and her car didn't seem to be damaged.

The driver of the other car asked to exchange license and insurance information. Her face fell when I said to her, "I just passed my driving test a couple of hours ago so I just have this pink slip."

She took the slip and then stared into the car filled with four 16-year-olds who were on the verge of cracking up.

"I'll tell you what. We don't need to exchange any information if you promise me that you will drive home now." She said with a half smile as she walked back to her car, shaking her head in disbelief. My friends made fun of me the whole way home, and I promptly forgot about it soon afterwards. It would be years before I realized the damage that could have been done, the lives that could have been cut short by my own carelessness but were mercifully not.

Gratitude shouldn't be reserved for only the things we have. It should also be for the things that didn't happen but so easily could have. The near hits. The narrowly missed collisions. The days when we come home and everything is miraculously okay.

And the train wreck made me think about all the times when we're in a rush. Late for a meeting. Or a class. Or to pick up a child from school. And we go faster than we should. To save time. We don't think about the consequences because we have escaped them perhaps in the past. But speed can kill. Saving time may lead to losing life. Few of us dream about topping train speeds, but many of us sometimes find ourselves wondering how fast we can go without flying off the rails in our lives. And the recent train crash can serve as a warning to us all.

Life is precious. We can't control the consequences of everything in our lives, but we can – and must – do our best to live carefully. To look in front of us. To slow down. To realize that more often than we know, our own lives and the lives of those around us are in our hands.

We Have to Talk About Charvona
Do You Like Slow-Cooked Food? Thank the Jews
Ashkenazi Style Cholent Recipe
Were Adam and Eve Jewish?
Comments