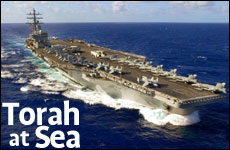 How Judaism informed my work as a deployed Navy Chaplain.

Imagine sitting in a room about six feet long and five feet wide. The ceiling eight feet above your head is the underside of the flight deck of a nuclear-powered aircraft carrier. During flight operations, which last from 10 in the morning until 10 at night, a deafening roar sounds overhead every time a jet lands.

Welcome to the chaplain’s office aboard CVN-76, the USS Ronald Reagan, where I spent a seven-month deployment to the western Pacific and the Persian Gulf. And where, on a daily basis, I used the wisdom of Torah to help the constant stream of sailors and Marines who came seeking solace and guidance amidst the turmoil of humanitarian assistance in icy cold waters and combat operations in desert heat.

The one place you can go for guaranteed confidentiality is the chaplain.

With 4200 people aboard, an aircraft carrier is like a small town supported by a single industry: air combat. In fact our ship even had a Starbucks kiosk at which you could learn to be a barista. There were four chaplains aboard, three to take care of the ship’s company and one, me, to look after the air wing - the pilots, maintainers, and staff who operate the aircraft. And like most small towns, there are precious few secrets. Everybody knows everybody else’s business. The one place you can go for guaranteed confidentiality is the chaplain. It did not matter if it was 2:30 in the morning, if a shipmate needed a shoulder to cry on, and especially if he did not want his commanding officer to know about it, I got the call.

During Operation Tomodachi, the humanitarian assistance operations off the coast of Japan after last year’s tsunami, a sailor came to see me because he had an emotional collapse on the flight deck. Being overwhelmed by our confrontation with such massive devastation and the ever-present threat of nuclear disaster had reawakened a deep sense of pain and loss for his father who had died two years earlier. During our conversation I found that, having had only a few days of leave during which to arrange the funeral and comfort his mother, he had returned to work never having mourned for his loss. I explained to him the concept of sitting shiva, taking the time to focus on grieving and coming to terms with the death of his father. It made sense to him, but how and where to sit shiva on a warship? Fortunately his chief petty officer was an understanding and resourceful individual and arrangements were made for him to have a quiet place on one of the lower decks to mourn. 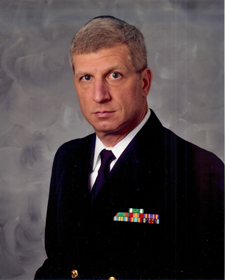 Another challenging incident involved a female sailor whose husband on shore had stopped communicating with her. She couldn’t figure out why. Having been on the ship for three months where their only contact was Facebook and email, she was completely at sea (pun intended). It took several meetings but her puzzle was finally solved. In virtually all of her messages to her husband she mentioned something one of her shipboard friends had told her, and all of these friends were male. Inevitably this made her husband feel jealous and insecure. It took several more meetings before she was willing to admit that her desire for numerous male friends arose from her need for compliments to replace the ones she received from her husband when they were together. We talked about the idea of the sacred nature of the relationship between a husband and wife, how each should make the other their sole object of adoration.

At first she rejected my suggestion that she make some female friends. But when she tired of having to reject the advances of all these male “friends,” she realized that cultivating a friendship with a female co-worker would be a big step forward in resolving the struggles in her personal life. At last report she and her female buddy had made a daily exercise pact and her husband was sending numerous compliments daily.

When most people think about the United States Marine Corps, they think of their toughness. My experience is that they fight hard but desperately want to love gently. Early on during the deployment a Marine came to see me. He was upset because his wife was threatening to divorce him. Evidently, not long before he left for the ship, he was texting another woman and his wife found out about it. Needless to say she felt betrayed and angry. He had tried everything: daily deliveries of roses and candy, a steady stream of messages, anything that he could think of that would alleviate his guilt. Therein lay his problem. None of this was resonating with his wife because it was about him not her. She was more interested in punishing him than assuaging his conscience.

We talked about the nature of teshuva, sometimes translated repentance but perhaps more accurately meaning return. We also talked about the nature of kindness, that for an act to be truly kind it must appear so to the recipient of the action not to us. He spent the rest of the deployment trying to understand his wife’s needs and the language and behaviors that she wanted.  He began to seriously try to help her trust him again and rebuild their marriage.

Only one of these people was Jewish, yet they all saw the sagacity of the Torah.

One morning, about 2:00 a.m., I got a call that a sailor needed to talk to me because he was going crazy from being apart from his wife. I got out of my rack (bed) and bumped my way down the p-ways (passages) to the office where the sailor was waiting for me. He begged me to get him off the ship. It took me a while to convince him that since this was beyond my authority, it would be better to tell me what was wrong.  He told me he had been married for about a year to a very beautiful woman. Not long after he left for deployment, his wife, with his encouragement, became a swimsuit model.  At first he loved that she would email him pictures of herself that he could showoff to his shipmates. But recently his wife’s social life had become much busier as a result of her new job and he was consumed with jealousy. Over the course of several early morning meetings, he learned, perhaps the hard way, why it is important for a husband and wife to keep intimate aspects of their relationship private. Compounding his jealousy was a feeling that if he told his wife that he did not want her modeling any longer, she would resent it as his trying to control her and get angry enough to leave him.

Fortunately, his wife was willing to discuss the matter, if not immediately accede to his wishes. The negotiations continued for most of the rest of the cruise but as of our last meeting it looked like their marriage would survive.

Only one of these people was Jewish, yet they all saw the sagacity of the Torah. For them – and me, it helped us create a tent of tranquility amidst the tumult of a combat deployment. Torah is referred to as Torat Chaim, Torah of Life. For the sailors and Marines aboard the USS Ronald Reagan, in many cases it was indeed a lifeline.

Rabbi Kevin S. Bemel is a navy chaplain, most recently assigned to Carrier Air Wing 14. Prior to that he and his family spent over three years with the Marine Corps in Okinawa, Japan where he ministered to American military personnel and their families, American civilians, both government employees and ex-patriots, as well as local nationals. Prior to joining the navy six years ago Rabbi Bemel spent 26 years in commercial real estate and other businesses, including 20 years running his own company. When his current tour concludes, Rabbi Bemel will return to civilian life where he will be training veterans to be entrepreneurs and will be the Executive Director of the Institute for Citizenship in the Republic, an organization that promotes exploration of values and history in an interdenominational, non-partisan atmosphere so as to create greater intentionality on the part of the citizenry as it makes decisions that will affect the future of the United Sates of America.

Chosen
Don’t Believe in Other Gods Versus God is One
Seeing Without Eyes
Why Shouldn’t We Eat Whatever We Want?
Comments
MOST POPULAR IN Israel
Our privacy policy
Aish.com Is Looking for Great Writers