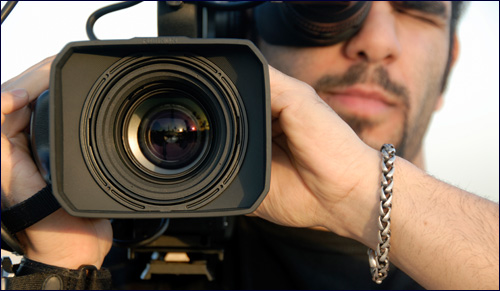 Camera’s selection for the media’s biggest blunders in reporting on the Middle East.

1. Wave of Palestinian Violence Accompanied by Spate of Bad Journalism

Some correspondents and headline writers are doing a fine job reporting the terror attacks in Israel, but all too many others are failing at this task, relying on the passive voice, euphemism, and imprecision to obscure Palestinian terror attacks and even recast terrorists as victims of arbitrary Israeli violence. In a particularly noxious example, The New York Times incorrectly and absurdly described a butterfly knife wielded by a Palestinian attacker – a type of knife known to be used by street gangs and illegal in a number of countries and U.S. states – as a "Boy Scout"type knife. This was the third New York Times article mentioning the incident. In all three pieces, the brandishing of a knife was described merely as an Israeli allegation. In the latter two articles, Palestinian allegations that the knife was planted were given equal weight to Israel’s description of the man holding a knife, despite the fact that he is shown on video wielding the knife. The Times issued a peculiarly worded and weak “correction.”

The New York Times crossed a particularly odious line when the International section of the newspaper included a prominent graphic about Democratic opposition to the Joint Comprehensive Plan of Action (JCPOA), commonly known as the Iran deal, highlighting, first and foremost, the Jewishness of lawmakers or their constituency. The newspaper’s decision to signal that Jewishness is the central factor to be scrutinized when looking at opponents of the deal evokes a number of dark and dangerous stereotypes: That Jews in this country should be singled out for examination; that lawmakers may be putting their Jewishness above their party; that they may even be putting their Jewishness above their American identity (after all, why else should The New York Times highlight – literally highlight, in yellow in the original graphic – that these lawmakers are Jews?); and/or that the Jews wield disproportionate influence on foreign policy. In fact, as Congress considered the deal, time-worn stereotypes of Jews as dual-loyalists, using their money and nefarious influence to incite wars surfaced in various media.

Mainstream news media have overwhelmingly neglected to provide coverage of the content, pervasiveness and psychological impact of Jew-hatred being inculcated in the Palestinian public via Palestinian media, mosques, schools and officials. Palestinian religious and political leaders explicitly urged followers to “form stabbing squads,” “attack in threes and fours,” and “attack with axes and butcher knives.” They asked, “Why not run over this Zionist?” and “Why not throw stones and Molotov cocktails at him? Why not stab him in his heart?” The refusal of many, if not most, journalists to openly explore and report this reality abets the continuation of the deadly violence – making them nothing less than accomplices.

MSNBC has been covering the current wave of violence against Israelis with particular clumsiness. Two veteran NBC correspondents, Martin Fletcher and Kate Snow, appeared on MSNBC discussing a series of maps exposing the “truth” about what underlies the current explosion of Palestinian violence: Jewish usurpation of the pre-existing state of Palestine. Of course, no state of “Palestine” existed in 1946 – or ever. The maps do NOT demarcate land possessed by Arabs or by the mythical state of Palestine. In fact, the vast majority of the land (over 90 percent) had no legally recognized owner after the dissolution of the Ottoman Empire. To its credit, the network corrected. Days earlier, Palestinian journalist, Ayman Mohyeldin, in a live report, repeatedly cast doubt about an Israeli account that a terrorist was shot as he threatened Israelis with a knife. Even as Mohyeldin spoke, a split screen showed still frames of the knife-wielding terrorist. The anchor, Jose Diaz-Balart, described the network’s own video, “We can clearly see the man in camouflage T-shirt and pants with what appears to be, at least in his right hand, a knife…like at least a five-inch or longer black blade.”

In an outrageous BBC interview on January 11 on a Paris street during the mass unity rally after the murder of the Charlie Hebdo cartoonists, the Jews at the Kosher market and other victims, a Jewish woman said recent events resemble the 1930s and Jews should respond by making clear they’re being targeted, Tim Willcox of the BBC interrupted her to say, “Many...many...many critics, though, of Israel’s policy would suggest that the Palestinians suffer hugely at Jewish hands as well,” in effect proclaiming that murdering Jews in a Paris supermarket is understandable. Under a hail of criticism for the exchange, Willcox made a half-apology on Twitter, tweeting, “Really sorry for any offence caused by a poorly phrased question in a live interview in Paris yesterday – it was entirely unintentional.” The BBC took no further action, leaving one to wonder whether the BBC subscribes to irrational and bigoted views that justify murderous attacks on Jews around the world.

6. Libel of Israel in Fashion at Elle Magazine

Editors of Elle.com provided a glamorous platform to Palestinian-American activist Karmah Elmusa, enabling her to spout, unchallenged, vitriolic anti-Israel propaganda. Elmusa charged that Israel sentenced her Palestinian cousin to nine years in jail for his “role in a protest”. Editors of the popular fashion magazine and Hearst Magazine executives have failed to answer CAMERA’s calls to either substantiate or retract this highly unlikely claim. Israel does not throw Palestinians in jail for nine years simply for taking part in a protest. CAMERA noted that Elle and Hearst could easily provide the relative’s ID number to the spokeswoman of the Israel Prison Service to determine why he is serving a sentence, and how long it is. They have declined to do so, signaling that Elle should not be trusted as a source for information on topics weightier than fashion and makeup.

Benjamin Netanyahu’s unexpected landslide victory in Israel’s elections and the ensuing “displeasure felt in some quarters,” as the Associated Press put it, prompted the influential wire service to pen a 1,500-word length feature assailing Israel’s democracy, “AP Analysis: Is Israel democratic? Not so clear”. The author, AP’s Middle East editor, sets up the false argument that Israel’s democracy is questionable by including West Bank and Gaza Arabs, non-citizens of Israel, in the total number of Arabs who don’t have the Israeli vote. An accurate characterization of the state of Israel’s democracy with respect to the voting rights of its Arab citizens would be that all Israeli Arabs are entitled to the right to vote. (Those living in Jerusalem are entitled to Israeli citizenship, and therefore to vote, but only a small minority have chosen to exercise this right.) In what other context have any non-citizens of a country been given the right to vote in that country’s national election?

A Guardian editorial praising the Iranian nuclear deal included a curious claim regarding Iran’s President, Hasan Rouhani: “In a small but perhaps encouraging sign, President Rouhani, in his statement welcoming the deal, referred to Israel by its name, rather than as “the Zionist entity”. Not only did Rouhani not use the word “Israel,” he in fact referred to the Jewish state as “the Zionist usurper regime”. Hardly encouraging. After communication from CAMERA’s UK Media Watch, Guardian editors corrected.

CAMERA’s Hebrew-language site, Presspectiva, exposed the false claim by Haaretz’ Gideon Levy that there are no swimming pools in Gaza. Had this claim been fact checked by editors, it would easily have been disproven. Too frequently, CAMERA has noted instances of “Haaretz, Lost in Translation,” in which misinformation finds its way into the English edition of Haaretz as it is incorrectly translated from the Hebrew. As Haaretz English is a favorite source for international journalists, this is a serious, and recurring, problem. 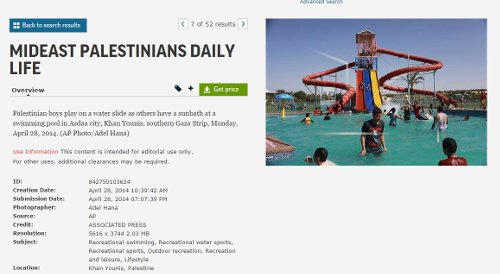 10. Washington Post and Other Media Pretend ‘Breaking the Silence’ a Credible News Source

Numerous media outlets are treating an “organization of active and reserve duty [Israeli] soldiers, called Breaking the Silence” (BtS) and the reports it releases as legitimate news sources. This is a mistake, since BtS’ sloppy methods, unfounded allegations and anti-Israel foreign funding have been exposed repeatedly. Washington Post Jerusalem Bureau Chief William Booth acknowledges that BtS testimonies “are anonymous and impossible to independently verify.” He writes that the Israel Defense Forces “said that Breaking the Silence ‘does not provide IDF with any proof of their claims.’” And he concedes that “members of Breaking the Silence are viewed by many Israelis as ‘anti-military.’” Yet, The Post and other outlets use the group’s “reports” as opportunities to repeat false Palestinian propaganda claims that Israel inflicts “mass destruction,” uses disproportionate and unnecessary force in combat and inflicts “high numbers of civilian casualties.” In fact, the opposite is true: IDF engagements result in the lowest civilian to combatant casualty ratios in modern warfare.

Media Critique #29 - No Quarter To Terrorists

Stop the Bias at CBC

National Geographic: Distorted & Deceptive
How I Learned to Love the Multiverse
10 Big Jewish Inventions
A Journey through Jewish Sicily
Comments