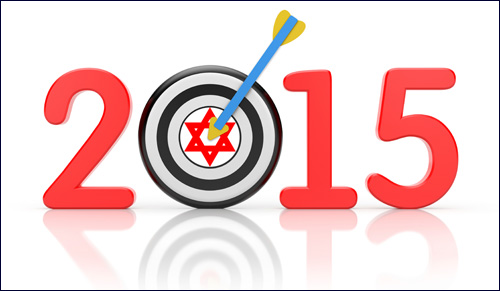 We Jews like to look back and reflect. So reflect a little with me, won’t you?!

Netanyahu’s Speech to the U.S. Congress

Israeli Prime Minister Benjamin Netanyahu spoke before a joint meeting of Congress on Capitol Hill in Washington. Netanyahu said a deal the U.S. and its allies are pursuing with Iran over its nuclear program is "very bad" because, according to him, it doesn't take away the Islamic republic's ability to ultimately obtain nuclear weapons. "This is a bad deal — a very bad deal," Netanyahu told Congress. "We're better off without it." Congress asked Netanyahu to stop beating around the bush and tell them what he truly feels about the deal.

He said such a deal will "guarantee" that Iran gets nuclear weapons because it allows the Islamic republic to keep much of its nuclear infrastructure in place. And, he added, the alternative to a bad deal is not war, as some supporters of the deal with Iran have said, but "the alternative to this bad deal is a much better deal." The Congressional response was summed up by one Republican Congressman who exclaimed, “He seemed like a very nice and intelligent man, but most of us couldn’t understand him because we never learned Hebrew.” Immediately addressing that issue, Congress authorized funds to establish a Hebrew Training Camp for Hebrew-challenged Congressmen.

Jewish comedy legend Jerry Seinfeld cracked up an audience thousands of Israelis for 90 minutes straight during sets on December 19th and 20th in Tel Aviv. The 61-year-old comic and actor, one of the most successful Jewish comedians in history, sold out four shows during his first-ever comedy tour in Israel. He then purchased the country and announced plans to rename it “Seinfeld”.

At his first performance on Saturday night, he ran onstage to roaring applause at the Menora Mivtachim Arena in Tel Aviv, exclaiming, “Oh, my God, I’m in Israel! Oh, my God! Unbelievable!” This was similar to the audience having previously exclaimed, “Oh my God, look at the price of these tickets! Unbelievable!”

He teased the audience about the frenzied hype surrounding his Israel tour, saying, “Look at yourselves – how proud are you of yourselves, how proud are you that you got tickets to this show? You don’t even care about this show. You just want to tell everybody … you want to make somebody else feel bad.” The audience admitted Seinfeld was right and immediately made appointments with their therapists to discuss those issues.

On an Israel trip in 2007, he had joked about the experience, “When I was 15 and worked in a kibbutz, no one was interested in meeting me. No one wanted my autograph or to be photographed with me. They just let me hack away at the banana leaves.” To make Seinfeld feel at home, producers brought a banana tree on stage and handed Seinfeld a machete.

Upon some audience members asking that he say a phrase in Hebrew, he replied that he had learned Hebrew “for my Bar Mitzvah and that was enough”. When the audience members said that it was not enough, Seinfeld got the upper hand by completing the remainder of his show in Yiddish.

Famed Jewish actor and comedian Adam Sandler railed against Pink Floyd co-founder and anti-Israel activist Roger Waters during an appearance on the Howard Stern Show. As punishment for his anti-Israel views, there has been talk of forcing Waters to watch several Adam Sandler movies. Critics of this proposal, however, feel that that would constitute “cruel and unusual punishment”.

Although Bernie Sanders, Independent Vermont senator, is a self-professed “secular Jew,” and is unlikely to win the Democratic nomination, for many people he is the political personification of the strong Jewish religious commitment to social justice concerns. Plus, he reminds us all of our Uncle Bernie or Grandpa Bernie or Rabbi Bernie. Perhaps more notably, the number of Americans who said they’d be willing to vote for a Jew was surpassed by those who would vote for a Catholic, black, or female candidate. Even mimes rated higher. Except for Jewish mimes.

Aside from the experiences of the Sanders campaign, and the performances of Larry David, there are plenty of other reasons to question whether America is really that tolerant of Jews. As of last year nearly 60 percent of religious-based crimes in the United States were committed against Jews. Another report discovered that 54 percent of college students experienced anti-Semitism in the first six months of their academic year during the 2013-2014 school period. One woman even stomped on her Barry Manilow album. All of this can be tied to broader studies which suggest that anti-Semitic attitudes are increasing throughout the Western world, particularly when tied to old-fashioned religious bigotry or relatively newer attempts to use legitimate criticism of Israel as a means of promoting deeper anti-Semitic beliefs. So, if Sanders decides to run as a Lutheran, we’ll understand why.

The Grass is Greener

WouldJew Believe #5
Bechukotai 5782: Divine Retribution
Behar 5782: Working to Live or Living to Work?
The Wholeness of Being Broken
Comments
MOST POPULAR IN Funny Stuff
Our privacy policy