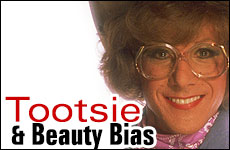 Dustin Hoffman would never have given Tootsie a second look.

So realized Dustin Hoffman when he first saw himself on screen dressed as the title role of his 1983 film Tootsie. Speaking in an interview for the film's 30th anniversary, Hoffman tearfully recalled the moment he realized that, in real life, he never would have spoken with his female screen character – not deeming her attractive enough to approach.

Hoffman lamented all the "interesting" women he's never gotten to know because of his bias toward women who are conventionally beautiful. Hoffman's revelation struck a chord with many people. His interview quickly went viral. We can all relate to his frustration in trying to get beyond the physical when relating to others.

It isn't only Dustin Hoffman who finds it difficult not to be swayed by exterior looks. People who are rated as physically attractive by their peers earn more money, enjoy greater happiness, and are even healthier than their more ordinary-looking colleagues. University of Texas Professor Daniel Hamermesh has quantified what he calls the "beauty advantage": an extra $230,000 of lifetime earnings that more attractive men make compared with identically-qualified men whose looks are more ordinary.

Incredibly, researchers have even found evidence that parents are more attentive to attractive children than less-attractive ones, for instance keeping a better eye on them in stores. Is it possible that we are so shallow that even this deepest of bonds – between parent and child – can be swayed by superficial attractiveness?

Indeed, many of us have personally felt the sting of being overlooked in favor of more attractive peers.

Judaism puts forward a very different idea of beauty. Instead of the modern formula where beautiful people are more likely to command attention – and thus have others want to get to know them better – the Torah reverses equation: We find people attractive when we already know and like them.

The Sages of the Talmud grappled with the question of how to define physical beauty. “May one praise a homely bride by calling her beautiful? Or would doing so be a lie?” (Ketubot 17a)

Where there is affection, beauty will grow.

The great sage Rabbi Hillel answered: we can indeed praise a bride – no matter how she looks – by calling her beautiful, because to her husband, she is indeed beautiful. Rabbi Hillel recognized a powerful truth: our feelings for others strongly influence our perceptions, and where there is affection, beauty will grow. Moreover, this beauty is stronger than mere “prettiness,” because it is a byproduct of deep affection.

We see examples of this all around: the bland-looking neighbor whose spouse thinks they're the greatest-looking; the run-of-the-mill kid whose mother thinks they could be a model; the best friend or sibling whose gradual aging or weight gain over the years we never even notice. I remember my grandmother laughing as she described herself as “never being a beauty.” I didn't know what she was talking about, for in my eyes she was incredibly beautiful – and who could possibly think otherwise?

Judaism says that another way to forge connections with others – and to make them dearer and more attractive – is to invest in their well-being.

Again, this logic runs counter to conventional wisdom. Whereas today many believe that feelings of “love” cause us to feel closer to others, in Jewish thought the reverse is true.

Giving creates a bond. It makes us feel more invested in others, which in turn makes us care about them more.

The Talmud tells us that the Second Temple was destroyed due to baseless hatred, sinat chinam. But don’t we all have our reasons for not liking someone?

Dustin Hoffman gave us a perfect example that unfortunately applies to many of us; we don’t like people based solely on their exterior. We just don’t like the way they look. And that leads to disengagement, estrangement, coldness and lack of care. That is baseless hatred; denying a person’s humanity for no real reason at all.

Rebuilding the Temple starts with us. Take a hard look at your inner bias and move beyond your knee jerk discrimination. Instead reach out and give. And discover the exquisite beauty that rests inside every one of God’s gorgeous creations.