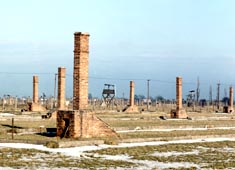 In 1941, experimental executions by gassing began at the Auschwitz death camp in southern Poland. The entrance to Auschwitz was cynically marked with a sign, "Work makes you free." Arriving prisoners would be subject to a "selection," often administered by Josef Mengele, where a wave of the hand decided who would be used for medical experiments, who sent to forced labor, and who murdered that day. The latter group was sent to a gas chamber pumped with Zyklon B; the bodies were then burned in the Auschwitz crematoria. Jewish leaders begged Roosevelt and Churchill to bomb the railway lines leading to Auschwitz, but the Allies never gave the plan priority. In its four years of operation, the Nazis murdered more than one million Jews at Auschwitz.

Breaking Barriers and Baking Babka: How One Jewish Mom Became a YouTube Sensation
Is Grease the Word?
In the Shadow of David and Goliath
Scientific Curiosity and the Divine Encounter
King Sennacherib and the Siege of Lachish
The Meaning of Some Common Jewish Last Names
Big OnThe Little Things
Chraime Egg Boil
Is Grease the Word?
Comments