In 1312 BCE (Hebrew year 2449), Moses came down from Mount Sinai with the second set of Tablets, indicating that God had forgiven the Jewish people for the sin of the Golden Calf. This day henceforth become Yom Kippur, the Day of Atonement, when a person's soul is cleansed of transgressions. 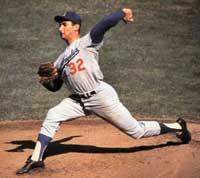 Also on this date in 1965, Los Angeles Dodgers pitcher Sandy Koufax refused to pitch in the first game of the World Series, choosing instead to attend Yom Kippur services in the synagogue and observe the fast. The World Series went to a seventh and deciding game, and Koufax threw a three-hit shutout to win the Series and earn the MVP award. Koufax is arguably the greatest left-handed pitcher of all time; he unanimously won the Cy Young Award three times. Arthritis ended his career at the age of 31, and he became the youngest person ever elected to the baseball Hall of Fame. Hall of Fame slugger Willie Stargell said: "Trying to hit [against Koufax] was like trying to drink coffee with a fork." Yet despite all his achievements on the field, Koufax is still remembered best for his Yom Kippur break, which instilled Jewish pride in millions of Americans. In 2001, in the thick of a pennant race, Dodgers outfielder Shawn Green ended his streak of 416 consecutive games in order to observe Yom Kippur; he cited Koufax's decision as motivation for his own.