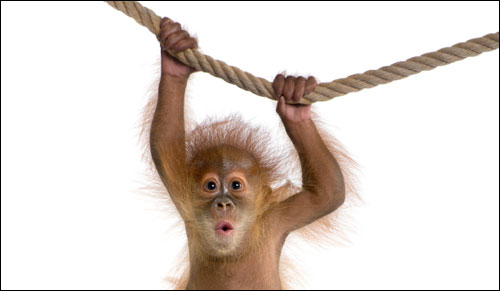 My common sense tips to make this year a winner.

When it comes to safety, we, as a society, generally choose to look the other way. Take the popular safety-instruction song, “Five Little Monkeys”. The first stanza goes like this:

Obviously, these monkeys are not rocket scientists.

Now let’s forget for a moment that this mother has to call the doctor to find out that her kids should not be jumping on the bed. Does someone really need to go to medical school to pick up this bit of information?

Now let’s look at the next stanza. It starts off with this:

Do you see what happened there? These monkeys were doing something dangerous, someone got hurt, and the only monkey that actually learned a lesson from this was the one that was injured. Everyone else keeps jumping. And guess what happens?

One fell off and bumped his head.

Obviously, these monkeys are not rocket scientists. This is further evidenced by the next two lines:

Mommy called the doctor, and the doctor said,
“No more monkeys jumping on the bed.”

And then the poem goes on to talk about what happens when three monkeys jump, and then two, and then one. But what do we learn from this? Well, if you’re a doctor, you learn that if you dispense medical advice for free over the phone, then people will call you five times in one night about what is essentially the same problem. That’s why they started with co-pays.

But for the rest of us, we can learn that when one person gets hurt, we should all try to see what we can learn from that, so that we don’t get hurt as well. Fortunately, there are people getting hurt all the time. The world is just full of jumping monkeys.

Our first story today comes from a zoo in Idaho, where visitors noticed that the pelicans were tossing a cell phone around, and then, all of a sudden, it disappeared. The zookeepers spent three hours trying to figure out which bird swallowed the phone. They were thinking of just waiting for it to ring, or calling it themselves, but they couldn’t figure out who owned the phone in the first place. They were beginning to think they’d have to x-ray the entire flock of pelicans, which, I’m guessing, is not a fun way to spend an afternoon. Finally, the phone was regurgitated by one of the pelicans, presumably the one who’d swallowed it.

So what can we learn from this story?

Cell Phone Safety Tip #98: While we’re at it, Bluetooth devices are pretty small too. Don’t put those anywhere near your ears.

Cell Phone Safety Tip #99: If you are missing both a cell phone and the owner of the cell phone, and one of your birds regurgitates the cell phone, but you’re still missing the owner, perhaps it couldn’t hurt to x-ray the entire flock of pelicans, just in case.

And yes, I know you’re not a pelican. (Research shows that over 99 percent of Aish.com readers are not pelicans.) But people can swallow things too. Take the woman in Sydney, Australia, who was eating spaghetti in a restaurant, when one of her friends made her laugh so hard that she swallowed her spoon. She was rushed to the hospital, where the doctors, after laughing so hard that they almost swallowed their surgical masks, were able to get it out.

I don’t know if the restaurant wanted it back.

Cutlery Safety Tip #459: Don’t put your spoons anywhere near your mouth. You know how society always says to eat with a spoon? Well, sometimes society is wrong.

Cutlery Safety Tip #460: Laughter may be the best medicine, but it’s not meant to be taken with food.

And speaking of swallowing things, our next story concerns a dog, but not one of those big dogs that looks like a person is for some reason wearing a dog costume. It concerns one of those little tiny dogs, the kind that elderly people sometimes carry around in their massive handbags, so that they (the dogs) can sit there and bark at absolutely everything, including the other items in the handbag. We’re talking about the kind of dog whose diet consists mainly of pant legs.

Anyway, a couple of months ago, an 87-year-old man at the Sunrise of Naperville Assisted Living Facility called 911 to report that his tiny annoying dog (he didn’t call it that on the phone) had been swallowed up. But not by a person. The dog had gotten sucked into his recliner. You know how, the moment you put the seat back on a recliner, all of your change comes rolling out of your pockets?

Anyway, the man only realized that his dog had fallen in when he closed up the chair, and heard a sharp “Yip!” coming from underneath him.

Firefighters showed up and cut the chair open (firefighters love cutting things open) and they were able to rescue the dog, along with about $37.50 and three pairs of dentures.

Recliner Safety Lesson #562: If you walk around with a tiny little dog in your pocket, always check before closing your recliner.

Recliner Safety Lesson #563: If the only way you know your dog is missing is that you hear barking coming from inside your chair, your dog is too small.

And speaking of inappropriate dogs, there is the story of a man in Long Island who ran into a coffee house and left his dog in the van.

Now I know what you’re thinking, and you’re absolutely right: You’re thinking that it is extremely wrong and dangerous to leave dogs (or kids, for that matter) inside a vehicle. But if you would have said this to the guy, he would have told you, “Don’t worry. I left the engine running.”

What a great idea! Guess what happened next?

That’s right. The dog disappeared into one of the seats.

No, I’m just kidding. This was a bigger dog; the kind that, when he walks up to you on the street, is far more interested in smelling what you have in your pockets. (“Yum! Are those breath mints?”)

What actually happened was that the dog got excited (“Yum! We’re getting coffee!”) and shifted the van into gear, driving straight through the window of the coffee shop.

Well, that was enough to wake everyone up.

Auto Safety Lesson #1: We cannot stress this enough: Don’t leave kids or pets in your car when you run into the store. Having them accidentally drive into a wall at 5 miles per hour is the BEST case scenario.

Auto Safety Lesson #2: This applies even if you’re running in for a “minute”. You know those people with tiny annoying dogs in their handbags who are always in line in front of you and take an hour and a half to pay? It’s never just a minute.