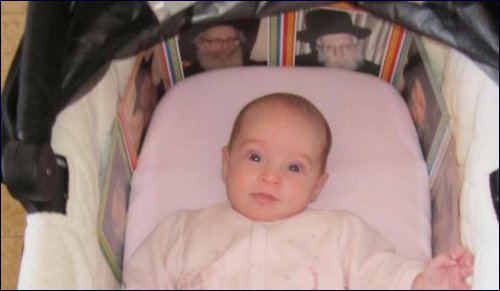 My thoughts and feelings after attending the heart-rending funeral of the baby brutally killed by an Arab terrorist.

I just got back from the funeral of the three-month-old baby that was killed in the terror attack and I feel a need to write. It may be a ramble so I apologize. 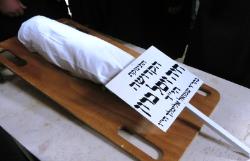 It hit me hard. Real hard.

I got to the funeral and made my way to the front. I saw the little baby wrapped up in shrouds, placed in front of everyone. It was so small, a little package on a huge slab of marble. The mother was right there, sobbing – wailing – screaming for her little baby girl.

There was a great sadness in the air, as well as this tension. No one was comfortable. It shouldn't be like this. The parents are so young – they look like children themselves. It shouldn't be that a 90-year-old rabbi eulogizes a little baby. The father spoke, it brought wails up from everyone in the crowd. They waited years to have this baby and had taken her that day to the Kotel for the first time.

God has his plans and we aren't privy to the details. It’s painful and I could only imagine what that mother and father are going through. Losing their only child, right in front of their eyes.

I feel guilty in a way. The whole thing happened right outside my house. I heard the entire commotion but I didn't see exactly what happened. My son was watching and said he heard someone say a baby was hurt. I calmed him down. He asked me about the baby before he went to sleep but I didn’t' have the heart to tell him that she died.

I didn't cry at first. I didn't know the identity of the couple. It was sad but..,

Then I heard who it was and I cracked. I cried like a baby and I am still crying. I don't even know them that well, but they are family friends. My sister had a baby the same time as them and shared a hospital room with the mother. The grandmother is one of my mother’s really close friends. I don't know what it was but it hit me. They lost their baby, a little sweet pretty girl.

We went on a trip during Sukkot together just last week. I sat behind that sweet little baby, she wore a pink bow.

I now understand clearly, like never before, why our sages tell us that it’s better to go to a funeral than to a wedding.

We need to do something different. I don't know what but I am different because of tonight.

May Hashem send us only good things and he send comfort to the family and all of klal Yisrael.

Funeral for Baruch
The Promise Of The Land
Which Chat Are You On?: Parshas Behar/Lag Ba’Omer
Do You Like Slow-Cooked Food? Thank the Jews
Comments
MOST POPULAR IN Israel Diary
Our privacy policy