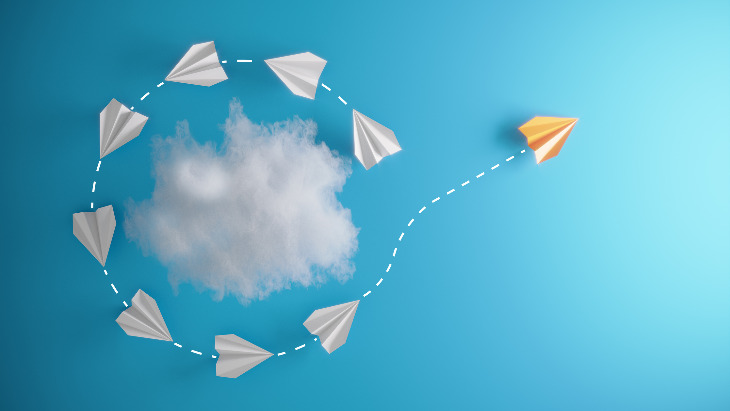 I can conquer my inadequacies if I aim higher.

Hasn’t everyone had a flat tire, missed a flight or boarded a plane intending to land in one city but ended up in another? We have all found ourselves in a different place.

Rabbi Abraham J. Twerski tells the story of an early chasidic rebbe who was once falsely accused of theft and jailed. It was a miserable experience.

There was violence and extortion. One prisoner, however, was different. He had been kidnapped as a child, knew he was Jewish and knew his Jewish name.

That’s it. He had no other connection to Judaism or the Jewish people.

The rebbe befriended him and taught him the Shema. Little by little he learned some Hebrew and some Jewish practices. After two months, both of the rebbe and his fellow prisoner managed to escape.

In jail, the rebbe had wondered: Why did God put him in such a different place? After the escape, his friend returned to his religion and his people. The rebbe had his answer.

The Talmud states that God created the world with the Hebrew letter heh because it allows for teshuvah. A heh is shaped like a doorpost, with a jamb and two sides, but without a floor. The heh is an abbreviation for God and the space within the heh symbolizes the Divine presence. Open at the bottom, the heh allows the human being the freedom to sin, to exit from the embrace of God. The Talmud extends the metaphor. The heh not only allows for sin. One of its two sides is actually incomplete; it is slightly open just beneath the jamb. This second opening signifies the possibility of return, of reentrance into the sacred space – of teshuvah.

One comes back in from a different place, not through the floor, not from the same place one exited. The Talmud asks: Why can’t the sinner just come back in via the same space he left?

“It won’t help,” says the Talmud. It doesn’t work that way. It is necessary to come back in from a different place.

Teshuvah is not linear. To come back in, it is necessary not so much to “grow” as it is to change.

Teshuvah is not a matter of sinning and then thinking it possible to repent the sin, to correct the sin, to return to where one was before.

If teshuvah were linear, it would be a matter of remorse, doing a bit better, growing a bit, then reentering God’s sacred space, symbolized by the space inside the heh. But teshuvah is not linear. That is why, year after year, so many people go through the entire High Holiday season, think they have done teshuvah and then, as the next Rosh Hashanah rolls around, feel that they really haven’t improved much, if at all. They’re right back where they started, stuck in the same bad habits, beset by the same failings and inadequacies.

They did not realize that to come back in, it is necessary not so much to “grow” as it is to change.

Not to focus on the same old failings and try to remediate them, but to follow a larger dream.

To harness a larger motivation.

Within a larger whole, one can more readily cure those old failings.

Within a larger spiritual discipline, one can more likely fix those bad habits.

Motivation counts. When it is larger, so are the results.

When I enlarge my vision – when, say, I set out not to study more Torah but to complete the entire Talmud; when I set out not to close my email an hour a day but the minute I come home from work until the next day; when I set out not to give a bit more to the community but to take on the presidency of an important organization – if I can truly envision a different me and extend my reach, I can achieve my goals.

I conquer my inadequacies if I aim higher.

If I come in from a different place.

The second opening in the letter heh means: We need to figure out how to do something voluntarily as big as what life does to us involuntarily; how to travel far from our comfort zone.

How to enter from a different place.

It takes that dimension of change to get us out of the rut, the pattern of sin and teshuvah on last Yom Kippur, only to find ourselves right back where we started this Yom Kippur.

It takes that dimension.

The Alter of Slobodka said: “If I knew that I could be only what I am, I could not endure it; but if I did not strive to be like the Vilna Gaon, then I would not even be what I am.”

That is why there is a second opening.

It is not a second chance.

It is an invitation to an entirely new world.

This article originally appeared in the Intermountain Jewish News, based in Denver, Colorado.