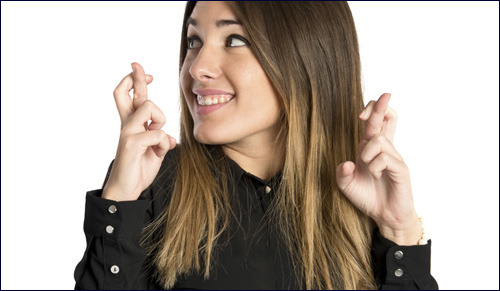 Superstitious people are everywhere. Whatever you do, don’t give them the evil eye.

The British, on the whole, tend not to be a melodramatic lot. It is usual for us to remark upon calamitous world events with a slight twitch of the mouth to indicate disapproval – Mt. Everest, for instance, should really have considered the fact that a quake might disrupt the average Englishman’s breakfast before it decided to make headline news. The news of Putin’s advance on surrounding countries is met with a sidelong glance to a fellow Englishman; a glance that can only be translated as that most awful of words; ‘foreigners!’

“You know why my necklace broke? The Evil Eye! I see in your eye, you see necklace, you are jealous!”

It is therefore interesting that one of the few aspects of life for which a Brit saves up his emotions is the superstitious. When an elderly patient tells me anything positive, such as: ‘I’m alright today,’ this is immediately followed by a frantic search for something wooden to touch, while the patient mumbles ‘touch wood, touch wood!’ Many glance around the sterile clinic environment, and realising the futility of their search, hit the patient chair, saying, ’oh well, plastic will have to do nowadays.’ The truly enterprising knock themselves lightly on the head instead of attacking the furniture.

A fellow Podiatrist once walked into work late, wild-eyed. ‘I had a dream,’ she whispered, while I poured her a cuppa tea. ‘In my dream,’ she dropped her voice to a hoarse whisper, ‘I was surrounded by giant rats. What does that mean?’ she ended on a frantic note, and ran to Google it. Google told her that it meant she was fat and greedy. She ended up avoiding mirrors all day and jumping at small noises.

Although this behaviour may seem surprising in England, I have found that superstition is just as much a part of life in Israel. One afternoon during my stay in the country, my friend and I decided to go on a walk through Jerusalem. We sauntered in the sun for a while, enjoying the calm peace of the hot afternoon, when we found ourselves on an unfamiliar road, surrounded by other unfamiliar side streets. This happens to me a lot, so I wasn’t particularly worried.

We waited, idling lazily in some shade, for someone to pass by of whom we could ask directions. Eventually a lady scurried towards us. She was wearing a giant blue sun hat, an electric blue skirt and a huge string of neon-blue beads round her neck.

‘Slicha, bevakasha? Excuse me?’ I stepped forward tentatively to ask her for directions. Her beaded necklace promptly fell to pieces, fluorescent blue beads scattering every which way. The woman wailed. ‘Oy!’ I gasped, horrified, stammering ‘slicha, slicha-’ while backing away, somehow feeling that this was all my fault.

‘Americaneem?’ the lady screeched, advancing on us, not giving me a chance to protest that I am British. My friend meanwhile did the most sensible thing; she quietly tried to take refuge behind me, finding quickly that at only 5 foot tall, I don’t make the best shield. ‘You know why ees breaking, my necklace? You know why is break?’ the lady continued.

I shook my head, terrified.

‘Is Ayin Hara! The Evil Eye! I see in your eye, you see necklace, you are jealous, kin’ah, and boom the Evil Eye he eats my necklace!’ She prodded me furiously in the chest.

‘Eep,’ I squeaked. Then: ‘I’m really really sorry. I really, no, seriously, I totally did not want your necklace, really,’ I told her. (Come on – neon blue??)

‘Ha!’ she screeched, disbelievingly. She considered us for a second more – I snidely hoped my friend was enjoying my hair in her face as she escalated her attempts to disappear behind me.

‘Give me your hand!’ the lady suddenly commanded. ‘Nu, mah pitom, where is your hand?’

‘Here?’ I suggested, waving the appendage in question. ‘At the end of my arm?’

The lady grabbed my hand. ‘Ahhh,’ she inhaled deeply. ‘Ahhh!’

‘Are you reading my palm?’ I asked suspiciously. ‘Geveret-’ I bravely started to protest, but - ‘Sha!’ the lady yelled at me. ‘Ahh,’ she said again, for effect, ‘ahh, yes. I see it clearly. Soon, my Americanee girl, you will meet-’ She paused and peered again. ‘I usually say you will meet tall, rich husband,’ she said squinting at my palm in some confusion. ‘But in your case it appears that you will soon meet a - a – what you call it - a parrot.’ (This was followed by a supportive snort from my shadow).

‘Ach!’ the lady yelled, and giving me up for a lost cause, threw my hand away from her so hard that I had to check that it was, in fact, still attached to my arm – something I was fast learning not to take for granted. ‘Pfah,’ she added, just to emphasise her disgust. ‘A parrot! Never before! Never again!’ And off she wandered.

I did keep an eye out for parrots from then on, but they must be avoiding me as I’ve not met a single one since returning to England. I have noted various sized rats in London Tube stations, although they have never made it into my dreams like they did for my poor Podiatrist colleague. The question remains, though; were I to palm-read for an elderly patient who had just shared some good news with me and failed to touch wood, would her palm predict rat-infested dreams? (And if it would, would that be because she’s knocked herself round the head one too many times?)

Medical Myths
In the Shadow of David and Goliath
Where Do the Laws of Nature Come From?
Saadiah Gaon, Rashi and Maimonides: How Three Rabbis Revolutionized Judaism
Comments