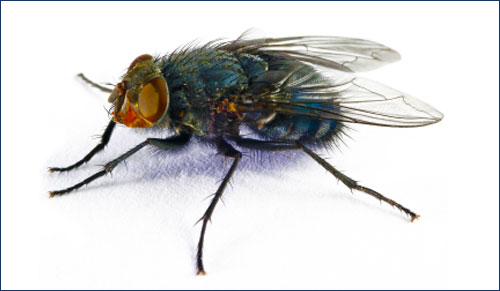 Have the past 21 generations of one family of flies dedicated themselves to mercilessly harassing me?

This week, I would like to write about a topic that is weighing heavily on everybody’s minds; a topic that is so prevalent in today’s society that it just begs to be addressed. Unfortunately, I can’t concentrate long enough to come up with one, because this blasted housefly keeps bothering me.

He’s been pestering me for three weeks. It’s only one fly, but whenever I sit down to work, there he is – landing on me, whooshing by my ear, going from one side of the room to the other directly through my line of vision… Right now, he’s walking around on my computer screen. What does he want? Is he reading this? Does he know I’m talking about him? I’m going to try something; bear with me for a second:

Okay, that didn’t work. Three weeks! I don’t know what to do anymore.

The first couple of times this fly bothered me, I just ignored it. I thought I’d read somewhere that flies only have a 24-hour lifespan. But then how do I still have a fly bothering me after three weeks? Does this mean that for the past 21 fly lifetimes, generation after generation of flies have been teaching their children to specifically come bother me?

“Because that’s what we’ve always done. My father did it his whole life, and his father before him. When my great great grandfather came to this house, he had only the wings on his back, and he went out there and bothered this guy from morning to night. And he had to fly three feet in the heat, both ways. Now be quiet and finish your garbage.”

But then I looked it up, and I found that the type of fly that lives for one day is actually the mayfly, which is related to the dragonfly, so I’m glad I don’t have one of those in my house, or there’d be a Mordechai Schmutter shaped hole in the front door. Houseflies, as it turns out, can live for up to a month, even if you spray them with Raid.

Now I want to take a moment to assure you, my readers, that I do not just wantonly kill God’s creatures. Like most people, I have no problem with God’s creatures, unless they keep sitting on my hand. There are only so many times I’m willing to slap myself. Maybe I should just –

Hang on; the fly is back. He just landed on the keyboard. He’s just standing there, brazenly rubbing his hind legs together. How does he do that?

I don’t believe this. I read somewhere that a fly’s average speed is 4.5 miles per hour. Why are they so hard to -- What was that? Is it in my EAR?

No, there it is. It’s back. Why does it keep coming back? You’d think that if someone tried to kill you with a shoe, you’d maybe keep your distance for a little while.

Why does he do this? He reminds me of my 11-month-old son, Gedalyah, who just recently learned to crawl, and he is almost always under my desk. He has a whole closet full of toys on the opposite end of this room, and every single one of them is on the floor, yet he insists on sitting directly under my chair, even though he’s slightly taller than the bottom of the seat. He crawls over, and I feel something on my legs, and then there’s a slight BUMP! that makes my skin cringe, even though Gedalyah himself doesn’t seem to feel it, and then he goes under my desk (where there’s slightly more headroom), sits on my foot, and pulls out wires. I have to fight him every time I want to move the mouse. When he’s not under my desk, he’s standing next to me, wiping his nose on the side of my pants and trying to type. And whenever I pick him up and put him on the other side of the room, he just follows me back to my desk, and the cycle starts again: Pitter patter pitter patter BUMP! Pitter patter SIT! YANK YANK TANGLE TANGLE pitter patter WIPE! TYPE TYPE – “Gedalyah, cut it out! Want to go play with your toys?” Pitter patter…

Usually, what I do with my son is I give him cookies. I keep a package of cookies on the other side of my desk, far from the mouse and just out of his reach. So when he comes over, he heads straight for the cookies, and then he stands there going “Uh! Uh!” until I give him one. Then he eats it and comes right back. He eats cookies all day long, but at least it keeps him out of under my desk.

Should I do the same thing with the fly? Should I keep some rotting fruit on the other side of the room so the fly goes there instead? If I do that, it’s just going to bring in more flies. The strategy only works for babies. It’s not like if I put cookies on my desk, I’m going to get more babies.

So I really can’t compare flies to babies. And anyway, the fly is far more interested in what I have going on inside my keyboard. It sits on the keys, trying to figure out a way to get in. There’s a lot of good stuff in there, because my son eats cookies and then touches the keyboard to get my attention until I give him more.