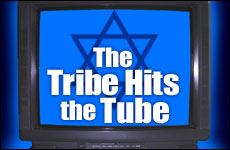 This year’s fall TV lineup has some interesting Jewish characters.

Back in the 1950’s there were very few Jewish characters on commercial TV. In fact, there was one --- Buddy Sorrell, the fast-talking, joke-a-minute, actually kind of annoying comedy writer working with Rob Petrie and Sally Rogers on The Dick Van Dyke Show, as played by Morey Amsterdam.

And we were kind of proud of him.

Then came Seinfeld, Will and Grace, Curb Your Enthusiasm and more, and now Jewish folks are as plentiful on TV they are on a Sunday morning in Murray’s grabbing a shmear.

Next season’s no exception. Here’s a preview of a few of the shows featuring Members of the Tribe you’ll be seeing this fall on the Tube: >

Jersey Shnorrer. From Hackensack to Haddonfield, Mike “The Insinuation” Tsooristino charms his way into nice Jewish homes throughout the Garden State without so much as opening his wallet or bringing a bottle of Manischewitz.

First up, the Insinuation ensconces himself for two weeks at a Ventnor oceanfront villa, frolicking daily on the beach and eating the family out of house and home all the while the family is firmly under the impression he’s from Comcast there to restore their Lifetime.

Watch out, Snooki! A new reality star is born!

Face the Nudnik. Each week a panel of Hebrew journalists question a prominent, influential, and incredibly sleazy newsmaker who attempts to evade their every question by commenting excessively on how much he or she loves Seinfeld, Marc Chagall, and the Jewish vote.

The distinguished panel of questioners includes Barbara Walters, Andrea Mitchell, and Gilbert Gottfried (he needs the work) who will weekly demonstrate the wide variety of styles, cadences, and tonalities in which to pose the question "But is it good for the Jews?"

Moderator Geraldo Rivera will close each program with commentary as to why anyone who’s not meshugah would hire him as the moderator for a news program in 2011 and why his mustache is indeed good for the Jews.

This Old House for Jews. The popular PBS program returns in a new format chosen especially for the Chosen People. Host Bob Vila explains how to select carpenters, electricians, and painters to accomplish those home repair and remodeling jobs that you and I could perform as readily as nuclear fission, cloning, or explaining a movie by the Coen Brothers.

Using the phone book to find non-Jewish contractors, asking sage questions about complex equipment such as a hammer (to learn how to pronounce correctly, click here: http://dictionary.reference.com/browse/hammer), and passing the time while waiting for the contractor to show up, if ever, are presented in clear monosyllabic English even we woefully unhandy Hebrews can understand.

Star Shlep. It’s “steady as she goes” once again as out of retirement shlep William (Oy Vey, I’m too old for Warp Speed!) Shatner as Admiral James T. Kirk and Leonard Nimoy as the half Vulcan/half Jewish Spock, whose new credo is “Live Long and Prosper and Never Shop Retail.” The ship’s crew will boldly go where no Jew has ever gone before --- K-mart!

The multi-ethnic but mono-religious cast will feature George Takei as newly converted (to Judaism, that is!) Lieutenant Sulu and new Jewish cast members in the roles of Dr. Bones McCoy, Lieutenant Uhuru, and Engineer Montgomery “Scotty” Scott, the world’s first Jew to speak with a Scottish brogue. The crew battles Klingons, Romulans, and the Deadly Race of Jewish Mothers which has Scotty shrieking in the premiere “We need more power! She’s going into the why can’t you be more like your cousin Joel who always goes to shul!” bit.

The Dick Van Dykeberg Show is a program which hearkens back to a classic situation comedy of the late fifties and early sixties. Working for the Alan Bernstein Variety Show are writers Rob Petrowitz, Sally Ruggulah, and Buddy Sorrell, the one gentile member of the writing team.

Buddy’s a fast-talking, joke-a-minute, actually kind of annoying guy, but isn’t it refreshing to have a non-Jewish character on national television these days?

Bet it will be a real source of pride for gentiles from coast to coast!

Leftovers Exchange Program
Were Adam and Eve Jewish?
How I Learned to Love the Multiverse
10 Big Jewish Inventions
Comments