How to replace anger and negativity with feelings of joy and love.

At the hors d’oeuvre reception before a fundraising dinner, I was conversing with a friend, whom I’ll call Joan. Out of nowhere, Joan made a scathing remark directed at me. Reflexively, I took a step back and exclaimed, “I feel attacked! I don’t want to continue our conversation.” I turned and walked away, fuming. At that moment the loudspeaker announced that the crowd should enter the banquet hall and take their seats. From the corner of my eye I saw Joan moving toward the right side of the hall. I went to the left, wanting as much distance between us as the walls would permit. I sat down at a table where other friends were chatting amicably, but I did not join in. I was miffed, hurt, and resentful.

I was in the World of Estrangement.

When we are feeling critical, we cannot feel love. 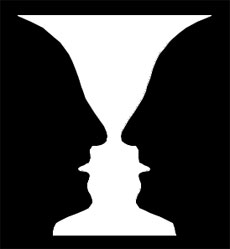 When we are in the World of Estrangement, feeling anger, sadness, or fear, how do we find our way to the World of Connection? By using the “Spiritual GPS.”

The “Spiritual GPS” is a system, based on Rabbi Wolbe’s teaching, to get us out of the labyrinth of negative, isolating states. It consists of three simple steps.

This might seem simple. Don't we all want to go to the World of Connection, the world of love, peace, and joy?

Not always, because most of us believe in the four inalienable rights: life, liberty, the pursuit of happiness, and the right to stew. So if someone has hurt you (emotionally, financially, etc.), part of you gets stuck in asserting your right to stew.

Indeed, you do have the right to stew, but why exercise it? Let’s say you buy a six-month membership in a swimming pool for a very cheap price. When you get there, you realize why the bargain. You are standing in the pool, and you see that it’s dirty. Cigarette butts and dead bugs are floating on the surface of the water. The water itself is so grimy that you can’t even see your feet. You own the membership to this pool. You’re entitled to swim there. But would you really choose to stay in that dirty, disgusting place?

No matter how shabbily you were treated, you do not have to remain stuck in the World of Estrangement.

So the second step of the Spiritual GPS is to choose where you want to go. The keyword here is “choose.” No matter how shabbily you were treated, you do not have to remain stuck in the World of Estrangement.

The problem is that we are often duped by the Nasseri fallacy. Mehran Karimi Nasseri is an Iranian refugee who lived for 18 years in Terminal One of the Paris airport. For the first seven years, he was trapped there, after his passport and other documents were stolen while he was en route to London. Great Britain refused him entrance and sent him back to Paris, but he could not leave the airport lest he be arrested as an illegal immigrant in France. After a legal imbroglio that kept him in the airport for seven years, Belgium finally offered Nasseri the opportunity to live in Belgium. He refused. He had made the airport his home, and despite other exit possibilities offered to him by various nations, he insisted that the offers did not meet his criteria. Nasseri continued to live in the airport for eleven more years, until ill health forced him to be hospitalized.

If you choose to go to the World of Connection, the third step plots your course to that felicitous destination.

Step 3: Plot your course through an act of giving: With the Spiritual GPS, you do not have to work through your negative emotions, delve into your subconscious motives, or analyze the other person’s wrong actions. You just have to get up and walk out of the airport. You do that by any act of connection. Since you can inhabit only one world at any given time, doing an act of connection instantaneously removes you from the World of Estrangement. It’s that simple, and that effective.

Doing an act of connection instantaneously removes you from the World of Estrangement.

In Judaism, “an act of connection” must be an act of giving. The word for love in Hebrew is “ahava,” which comes from the word “give.” The only road to the World of Connection is through acts of giving. This does not necessarily entail giving material objects (although flowers are always nice). You can give a smile, give a compliment, give emotional support, give thanks, give the benefit of the doubt, or forgive, as in the following map: 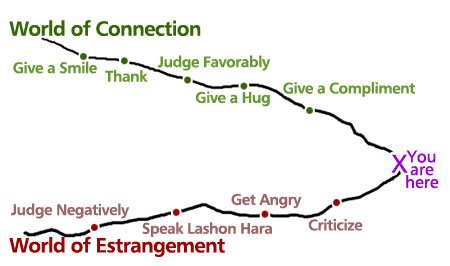 According to Rabbi Wolbe, all the mitzvahs of the Torah bring a person to the World of Connection. The positive mitzvahs, such as the commandments to love your neighbor or lend money to a needy person, clearly create connection. The negative mitzvahs, such as the prohibitions against stealing or speaking negatively about others (lashon hara), prevent falling into the World of Estrangement. In addition to relationships with other people, the other two basic relationships are with God and with oneself. Although it is beyond the province of this article to illustrate how every mitzvah leads to the World of Connection, Rabbi Wolbe quotes the Talmudic sage Rabbi Elazar ben Azarya, who said, “Life is for love,” and then explains: “This is the message of the Torah … the essence of life is love. For this we are called to build a World of Connection through our Torah and our Mitzvot. This is the entire Torah.”

Related Article: The Hero Within

So there I was at the fundraising dinner, sulking, resentful, and critical, my mind full of escalating recriminations against Joan. (Why does she always have to act like that? No wonder she doesn’t have any friends! ) Everybody around me was having a good time, but I was wandering aimlessly in the Land of the Livid. I wanted to find my way out. So I decided to use the Spiritual GPS.

Step 1: Identify your location: That was easy. I was sad, angry, and critical, which meant that I was in the World of Estrangement.

Step 2: Choose your destination: I chose to go to the World of Connection. Even though Joan was the initial instigator, it was my choice to dwell in the World of Estrangement. I decided to forfeit my right to stew. The World of Estrangement is, as its initials indicate, a place of WOE. Choosing to stay there would have been like standing in the living room of a rat infested house with the toilet leaking foul-smelling waste everywhere and waving my deed to the house as I insist on my right to stay there. Would any sane person consciously make that choice?

Step 3: Plot your course through an act of giving: Any act of giving would have worked. It did not have to be to the person who had offended me. I could have turned to the woman sitting next to me and given her a compliment about her suit. But as long as I was traveling to the World of Connection, I wanted to go first class. So I got up, walked across the hall, found Joan, stood behind her chair, leaned over, planted a big kiss on her cheek and said, “I love you and I don’t want to be estranged from you.” Presto! I was in the World of Connection.

You may be wondering: how did Joan respond? The truth is, it doesn't matter; the other person’s actions do not determine my choice of which world I want to inhabit. But Joan did look up at me, smiled, and said, “I love you, too.”

I could have spent the evening (or a week) fuming inside the Paris airport. Instead, my GPS showed me the way to the exit.

Pushing the Limit
What Happened to the Truth?
The Japanese Everything Bagel Spice Recipe
How To Stock A Jewish Pantry Wherever You Live
Comments
MOST POPULAR IN Spirituality
Our privacy policy