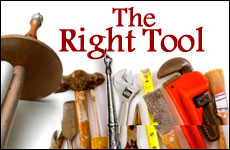 What my bottle brush taught me about life.

One Tuesday I noticed that my flowers from Shabbat were droopy - in fact downright dead. I took the vase off the dining room table, discarded the flowers, and reached for my bottle brush to scrub the vase. The bottle brush was not in its usual place.

"No matter," I thought. "I can do fine without it." I filled the vase up with soapy water, swished the water around, and poured it out. The inside of the vase was still coated with slime.

I reached for the brush I use to scrub the dairy dishes. It was too big to fit through the narrow neck of the vase. I tried using my fingers; they weren't long enough.

No matter how resourceful I am, there's no replacement for the humble bottle brush.

Not to be thwarted by the lack of a bottle brush, I decided to improvise a replacement. I took a wooden ruler and covered it with a washcloth. Voila! It was narrow enough to fit through the neck and long enough to reach the bottom of the vase. But it wasn't flexible enough to get to the hard-to-reach places.

Standing there holding my slimy vase, I had an epiphany: Doing the job right requires the right tool. No matter how clever and resourceful I am, there's no replacement for the humble bottle brush.

THE MANUAL FOR PLANET EARTH

That night I sat down to read my email and was almost knocked out of my chair by the vitriolic force of a scathing letter from my cousin. This cousin was insulted by something I had written in one of my articles. Her letter was like a bomb packed with poison-coated nails. She attacked not just my article, but my entire despicable self and my loathsome life. According to her, I was a contemptible cousin and a rotten human being, and had always been so.

I sat there in front of my computer at first flabbergasted, then hurt, then resentful. Even if I had been guilty of an indiscretion in my article, certainly I did not deserve all the insults she had fired at me.

Not one to be cowed, the warrior in me took up her sword and was about to launch a counter-offensive. My cousin was not such a sterling individual herself, and I knew just what to say in retaliation. My hands were poised on my trusty keyboard, a weapon I well knew how to wield, when I stopped short.

The Torah prohibits us from taking revenge and returning tit for tat [Lev. 19:18].

My hands withdrew from the keyboard. Okay, I wouldn't write her back a scathing letter. I got up and went to unload the dishwasher, but inside I was still fuming with hatred. How dare she?! By the time I had finished unloading the glasses, I realized to my dismay that the Torah also enjoins us, "Do not hate your brother in your heart" [Lev. 19:17].

I sat down at the kitchen table and decided to work this through. My feelings of outrage were bubbling up in my heart like a volcano, but the Torah expected me to process and control my thoughts and emotions as well as my actions. I knew that the way to change emotions is to change the thoughts that I was telling myself. By a gigantic act of will, I "changed the tape." I forced myself to remember good things about my cousin, times she had been loving to me, times she had been vulnerable.

Finally I stood up, calm enough to go to bed. I hadn't taken revenge and I didn't hate her in my heart. I would not write her a nasty letter; in fact, I wouldn't write to her at all. If she finds me so abhorrent, then obviously the relationship is over. I don't need a relationship with her anyway, I thought as I fell asleep.

The next morning, it dawned on me: the Torah doesn't condone the "silent treatment" either.

The next morning, it dawned on me: the Torah doesn't condone the "silent treatment" either. A Jew who does not greet his/her fellow for three consecutive days has transgressed the mitzvah to love your neighbor as yourself. The Torah was actually requiring me to communicate with my cousin.

It took me hours to work up to it, but that afternoon I sat down at my computer and wrote my cousin a letter. I humbly apologized for the offense in my article, told her how much I valued our relationship, and expressed my hope that this altercation would not create a rift in our family.

A few hours later I received a three-sentence email from my cousin. It said: "Sorry. I was having a bad day. Of course I love you and want to be friends with you."

I read her email with consternation. Her attack on me had sprung from nothing deeper than "a bad day"?! If it hadn't been for the Torah, her "bad day" would have led to a family feud that might have lasted a lifetime.

Some people like to say that Torah is the "instruction manual for planet Earth." I prefer to think of it as the Divine bottle brush.

The Babe Ruth of Kindness - Ethics of the Fathers 1:5

Whom We Hurt: A Yom Kippur Preparation

What The Angel Taught You
Extras In Our Own Epic
Evolution 2.0: The Coming Darwinian Revolution
Chukat 5782: Let’s Play the Blame Game!
Comments
MOST POPULAR IN Spirituality
Our privacy policy