The Palestinian Papers & the British Press 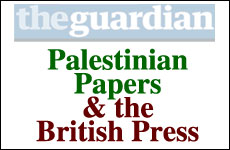 The Guardian is more hard-line against Israel than the Palestinian leadership itself.

Game over. No way back. An entire edifice of anti-Israeli demonization definitively consigned to the scrap heap, never to be recycled again. This is the uncompromising message that comes out of yesterday’s revelations on Israeli-Palestinian peace negotiations. To the horror of a European political intelligentsia which has been steadfast to the point of fanatical in its opposition to Israeli “settlements” in east Jerusalem, the Palestinian leadership itself, we now know, has long accepted that the vast majority of Israeli settlements can be considered legitimate and would become part of Israel under any reasonable peace agreement.

This is utterly devastating since it simultaneously shows that everyone from the British Foreign Office and the BBC to the European Commission and the continent’s passionately anti-Israeli NGO community have been adopting a position which was significantly more uncompromising on “settlements” than the Palestinian leadership itself, and also that that same Palestinian leadership had accepted that the so called 1967 “borders” — the gold standard for practically every anti-Israeli polemic around — are irrelevant to the prospects of a lasting peace.

In one of its most resentful leader columns for years, the Guardian was nothing short of apoplectic: not so much with Israel, but with a Palestinian leadership which has effectively blown the credibility of the Guardian’s very own mantras on the MidEast straight out of the water. The Palestinian leadership, the paper declaimed, had been shown to be “weak” and “craven”. Their concessions amounted to “surrender of land Palestinians have lived on for centuries”. And, in words that look alarmingly close to the position adopted by Hamas, “The Palestinian Authority may continue as an employer but, as of today, its legitimacy as negotiators will have all but ended on the Palestinian street.” This is sheer spite.

Privately and morally, senior Palestinians can see that there is nothing illegitimate or even especially problematic about most of the “settlements.”

But it gets worse. The only conceivable way out of this for the anti-Israel community is to turn this all upside down and argue — as analysts, reporters (anyone they can get their hands on) have been doing on the BBC all day — that what this really shows is the extent of Israeli “intransigence”: the Palestinians offer all these concessions, and still the Israelis say no! This was the line adopted by Paul Danahar, the BBC’s MidEast bureau chief, who quite casually averred that, “The Israelis look churlish for turning down major concessions”. Good thing no-one’s taking sides then.

Tragicomically, it just won’t wash. Privately and morally, senior Palestinians can see that there is nothing illegitimate or even especially problematic about most of the “settlements”, (as reasonable observers of the MidEast have been saying for years). This we know from the leaks themselves. But publicly and politically they cannot sell such concessions to their own people. This we know because they are currently trying to distance themselves from the leaks, and because they educate their own people in an implacable rejectionism which extends to the “moderate” Palestinian authority glorifying suicide bombers and other terrorists by naming streets and squares after them.

Logically and reasonably, the Israeli response is to see such “concessions” for what they are: well intentioned in so far as they go, but impossible to implement in practice. Quite apart from the question of Hamas-run Gaza, the Palestinians have been playing the same old game of saying one thing to one audience and something else to another. They are not a credible partner for peace, and the Israelis do not look remotely “churlish” for understanding this.

It will be interesting to see how this whole affair now plays out. But never again can the anti-Israel community play the settlement card and at the same time retain a single ounce of credibility.

Robin Shepherd, director of the International Affairs at the Henry Jackson Society in London, has held senior fellowships at some of the world’s most prestigious public policy institutes since leaving international journalism in 2003 when his last position was Moscow Bureau Chief for The Times of London. Visit his site at www.robonshepherdonline.com .

One Drink Too Many: My Journey to Letting Go of Alcohol, Finding Freedom and Choosing Happiness
Take Two: Why Pesach Sheini is Significant to Our Family
Why Really Everyone Believes in Free Will
Who was Two-Gun Cohen?
Should Jews Support Ukraine?
The Jews of Cuba
Comments
MOST POPULAR IN Media Objectivity
Our privacy policy