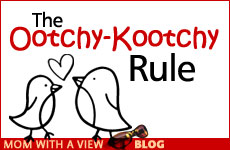 Why couples who show the most public affection are more likely to divorce.

People who define marriage mostly as romance are more likely to put their own needs over the needs of the partnership and 1-1/2 times more like to divorce. These are the 2010 findings of the University of Virginia National Marriage Project. And they accord perfectly with my husband’s “Ootchy-Kootchy” rule. In his experience, the couples that are the mostly physically demonstrative in public (and that have the most nauseating pet names for each other!) – you know the ones I mean – have the lowest rate of marital success.

I think there are a few reasons that explain the high divorce rate.

One is that frequently all that public display is exactly that – a performance for the audience. It’s not about how you feel about each other; it’s more about how the world feels about you. “Look at that gorgeous couple.” “They seem so in love.” It’s all about the image, the show. It’s about a romantic scene (too many movies?) and not about reality. It may even be about being in love with the idea of love. But it’s certainly not evidence of a deep and committed relationship.

Secondly, most people who truly care about each other, while occasionally affectionate in public, recognize that the true expression of love is an intimate and private concern. They don’t want to cheapen it by public proclamation and performance. They don’t want their privacy violated; their unique and special relationship gawked at by complete strangers, widely observed, or even marveled at. It will take away some of its special character. It’s too precious to risk.

Thirdly, the problem with romance and ootchy-kootchy is that it’s all about some fictional fantasy. Original romance was all about unrequited love. It could stay in the clouds but it never actually existed. It was never required to withstand the test of dirty diapers, unpaid bills and leaky faucets. Dinner doesn’t have to be made, homework doesn’t require doing and the garbage doesn’t have to be taken out. Reality can’t possibly compete.

True romance is in the giving, not the taking.

And yet it’s reality and not romance that ultimately has more staying power. And in that reality, it’s the people who don’t put their own needs first who have the most successful marriages. It’s not about giving up on romance but it’s about recognizing that true romance is in the giving, not the taking. It’s putting your spouse’s needs first. It’s about attending to the internal demands of the marriage and ignoring the rest of the world. All that counts is the two of you.

Keeping a relationship private also helps preserve it. The more public exposure, the more the intensity of a situation dissipates. We need to guard our relationships from external perspectives and interference.

Perfectionist
The Blue Beyond
Great Place to Live
Is Eating Supposed To Be Spiritual?
Comments
MOST POPULAR IN Family
Our privacy policy