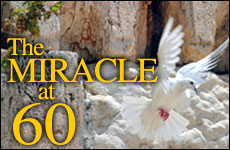 It's the norm for exiled nations to disappear -- with one exception: a miraculous story of redemption and return, after not a century or two, but 2,000 years.

Before sending Lewis and Clark west, Thomas Jefferson dispatched Meriwether Lewis to Philadelphia to see Benjamin Rush. The eminent doctor prepared a series of scientific questions for the expedition to answer. Among them, writes Stephen Ambrose: "What Affinity between their [the Indians'] religious Ceremonies & those of the Jews?" Jefferson and Lewis, like many of their day and ours, were fascinated by the Ten Lost Tribes of Israel and thought they might be out there on the Great Plains.

They weren't. They aren't anywhere. Their disappearance into the mists of history since their exile from Israel in 722 B.C. is no mystery. It is the norm, the rule for every ancient people defeated, destroyed, scattered and exiled.

With one exception, a miraculous story of redemption and return, after not a century or two, but 2,000 years. Remarkably, that miracle occurred in our time. This week marks its 60th anniversary: the return and restoration of the remaining two tribes of Israel -- Judah and Benjamin, later known as the Jews -- to their ancient homeland.

Israel is "the only nation in the world that is governing itself in the same territory, under the same name, and with the same religion and same language as it did 3,000 years ago."

Besides restoring Jewish sovereignty, the establishment of the State of Israel embodied many subsidiary miracles, from the creation of the first Jewish army since Roman times to the only recorded instance of the resurrection of a dead language -- Hebrew, now the daily tongue of a vibrant nation of 7 million. As historian Barbara Tuchman once wrote, Israel is "the only nation in the world that is governing itself in the same territory, under the same name, and with the same religion and same language as it did 3,000 years ago."

During its early years, Israel was often spoken of in such romantic terms. Today, such talk is considered naive, anachronistic, even insensitive, nothing more than Zionist myth designed to hide the true story, i.e., the Palestinian narrative of dispossession.

Not so. Palestinian suffering is, of course, real and heart-wrenching, but what the Arab narrative deliberately distorts is the cause of its own tragedy: the folly of its own fanatical leadership -- from Haj Amin al-Husseini, the grand mufti of Jerusalem (Nazi collaborator, who spent World War II in Berlin), to Egypt's Gamal Abdel Nasser to Yasser Arafat to Hamas of today -- that repeatedly chose war rather than compromise and conciliation.

Palestinian dispossession is a direct result of the Arab rejection, then and now, of a Jewish state of any size on any part of the vast lands the Arabs claim as their exclusive patrimony. That was the cause of the war 60 years ago that, in turn, caused the refugee problem. And it remains the cause of war today.

Six months before Israel's birth, the United Nations had decided by a two-thirds majority that the only just solution to the British departure from Palestine would be the establishment of a Jewish state and an Arab state side by side. The undeniable fact remains: The Jews accepted that compromise; the Arabs rejected it.

With a vengeance. On the day the British pulled down their flag, Israel was invaded by Egypt, Syria, Lebanon, Transjordan and Iraq -- 650,000 Jews against 40 million Arabs.

Israel prevailed, another miracle. But at a very high cost -- not just to the Palestinians displaced as a result of a war designed to extinguish Israel at birth, but also to the Israelis, whose war losses were staggering: 6,373 dead. One percent of the population. In American terms, it would take 35 Vietnam memorials to encompass such a monumental loss of life.

You rarely hear about Israel's terrible suffering in that 1948-49 war. You hear only the Palestinian side. Today, in the same vein, you hear that Israeli settlements and checkpoints and occupation are the continuing root causes of terrorism and instability in the region.

Israel's crime is not its policies but its insistence on living.

But in 1948, there were no "occupied territories." Nor in 1967 when Egypt, Syria and Jordan joined together in a second war of annihilation against Israel.

Look at Gaza today. No Israeli occupation, no settlements, not a single Jew left. The Palestinian response? Unremitting rocket fire killing and maiming Israeli civilians. The declared casus belli of the Palestinian government in Gaza behind these rockets? The very existence of a Jewish state.

One constantly hears about the disabling complexity of the Arab-Israeli dispute. Complex it is, but the root cause is not. Israel's crime is not its policies but its insistence on living. On the day the Arabs -- and the Palestinians in particular -- make a collective decision to accept the Jewish state, there will be peace, as Israel proved with its treaties with Egypt and Jordan. Until that day, there will be nothing but war. And every "peace process," however cynical or well meaning, will come to nothing.

Teach Children to Love and Respect, Not to Hate and Kill

IDF: Limiting Harm to Civilians (Powerpoint)
The Blue Beyond
Great Place to Live
Is Eating Supposed To Be Spiritual?
Comments
MOST POPULAR IN Israel
Our privacy policy

The Blue Beyond
Great Place to Live
Is Eating Supposed To Be Spiritual?
Are Jews Against Whistling?
Orphan Visiting Cemetery Before Wedding
Same Pot for Meat and Fish
Reciting Tehillim on Shabbat
Guilt Over Past Sins
Was Shavuot Originally an Agricultural Holiday?
The Jewish Impact on the Founding of America
1 2 3 … 2,984 Next »