The Lost Art of Babysitting 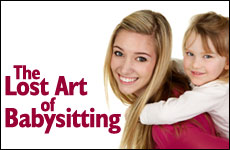 We beg them to let us pay them to come to our houses, sit on our couch, do almost no work and raid our refrigerator. The teenagers have officially won.

For the longest time, my wife and I never used a babysitter. Back when we had one kid, we’d just take her everywhere. You’d see us in a restaurant, and on the surface we would look like a normal couple, having mature grown-up conversations, but if you peeked under the table, you would have seen a baby in an infant seat drinking out of a bottle that was propped up by my feet.

But these days we can’t just stick all our kids under the table, so this is what happens every time we go out: First, we call the two or three teenagers that we know to see if they’re willing to babysit, and it generally turns out that every single one of them are all magically busy on the same night, which is also the very night that we want to go out. What are the chances? But then one of the girls gives us the names of about five of her friends, mainly because if you thought she was your last hope, you wouldn’t hang up until she agreed to come over. So we hang up and call those friends, or else we call our rabbi’s wife, who is an eighth grade teacher, and has a list of every girl in town who’s graduated elementary school in the last four years, and she gives us a couple of random names, or else she calls them herself, and so we finally get a babysitter about a half hour after we’re supposed to have left, although we never do find out her name, because we’re in such a rush to leave. So the next time we need a babysitter we have to start the whole process over. I doubt we would know if we ever used the same babysitter twice. Maybe we should have them sign some sort of log.

The people I babysat for had different foods than we did, so it was always very exciting.

But for the most part, it seems these girls just don’t want to babysit. It’s like we have to beg them to let us pay them to come to our house and sit on our couch and do almost no work and raid our refrigerator.

Does this make sense? This is a job we’re offering them. Imagine you know someone who’s looking for work, and you have a job for him, but you’re afraid to call him because he’s going to tell you that he’s busy, and then name five friends who are also busy.

And it’s not like we have difficult kids. Most of the time, our kids have already been put to bed, plus they’re shy and tend to behave around people they don’t know. At worst, they’re going to sit at the top of the stairs and take turns peeking down at the babysitter until she says, “I can see your feet,” at which point they’re going to trip over each other running back to their rooms.

Is that what these girls are afraid of? Having to discipline a bunch of footsy pajamas? Because it’s okay if she doesn’t. We’re not too demanding when it comes to babysitters. Basically, all we want is for our kids to be alive and relatively uninjured by the end of the night. You don’t have to take them for booster shots, or force-feed them broccoli, or pick what college they’re going to go to. Just make sure they don’t touch the stove or jump off the bunk bed with a blanket tied around their ankles.

When I was a teenager, I babysat a lot. Not so much for other people, though. I mostly babysat for families with a lot of boys, or for people who had their husbands make the phone calls to look for a sitter.

Most of my sitting, however, was for my parents, who never actually paid me. This didn’t really bother me, because most of their outings involved buying clothes, and when you’re young and short and not really into clothes in the first place, clothes shopping can be really boring. You can’t see over the racks, so the store is just one big forest of shirt sleeves that keep hitting you in the face as you chase your parents around the store. Also, sometimes, the clothes they’re buying are for you, and you have to try on fifteen pairs of pants in five minutes with your father knocking on the door every thirty seconds. So I liked staying home. But from time to time I did bring up the concept of money, and my mother’s response was that they were paying me in food and shelter and tuition. My argument was that never mind the tuition; they could have paid me in food and shelter and babysitting money.

So whenever we have a babysitter, we make it very clear that she can eat whatever she wants. Not that it matters. Generally, I find that girls don’t really eat much when they babysit. Usually when I come home, I find no evidence of anything missing. Are they eating the wrappers? I know that boys eat when they babysit, because I personally used to take full advantage of the open-fridge policy. Most of the time I made more in food than I did in cash. An added bonus was that the people I babysat for had different foods than my parents did, so it was always very exciting. (“Hey! These are kosher?”) I think it’s possible that girls don’t feel comfortable eating in strange places.

So maybe that’s the reason it’s so hard to find a babysitter. Maybe these girls are afraid they’re gonna starve waiting for us to come home.

But here’s a message for all you teenagers who don’t want to babysit: In ten years from now, you’ll be married with a bunch of little kids too young to babysit themselves, and all these kids you didn’t want to babysit today will be teenagers. And you’re going to call them and say, “Can you come over and babysit?” and they’re going to say, “Sorry, I’m busy,” but they’re secretly going to be thinking, “Teenagers going over to other people’s houses to babysit? Who ever heard of such a thing? I certainly never had any teenager babysit me when I was growing up!” And it’ll be your fault.

But I will tell you that we parents are not going to discourage them from babysitting for you personally. After all, we don’t even remember your names.

Behind the PTA
Scientific Curiosity and the Divine Encounter
Mind Over Milkshakes
Love the Convert
Comments
MOST POPULAR IN Jewlarious
Our privacy policy
Aish.com Is Looking for Great Writers