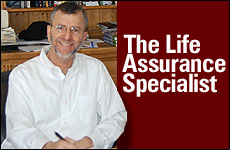 Marc Firestone’s efforts earn him Aish’s Power of One Award.

One sunny afternoon in Los Angeles, Marc Firestone was in line at the grocery store, minding his own business. He had a nagging feeling that the cashier was Jewish. So in his mellow, disarming manner, he asked: “Do you know that you can see the Western Wall live on the Internet?” Then he handed her an Aish.com card. It was classic Firestone: No hard sell. Just seizing the chance to connect with another member of the Tribe.

Life insurance salesman by profession, and lover of the Jewish people at his core, Marc Firestone received the coveted Power of One Award at the recent Aish Partners Conference in Stamford, Connecticut. The award is given to individuals whose impact on the Jewish world has been significant and heartfelt. (See video below)

Over the past 20 years, Firestone has taken to heart Rabbi Noah Weinberg’s directive to “teach what you know.” Having once been a newcomer to Jewish tradition himself, Marc has designed and taught more than a dozen classes, programs and creative initiatives that he has shared with several hundred people. From his living room in Los Angeles, he has taught Rabbi Weinberg’s “48 Ways to Wisdom,” relationship classes, one-on-one marriage classes to married men, and his extremely popular “User-Friendly Judaism” class.

Why don’t you share with others what you’ve learned?

“Years ago when I was at an earlier stage of my Jewish journey,” Marc recalls, “one of the Aish LA rabbis said to me: ‘Why don’t you share with others what you’ve learned?’ I replied, ‘I don’t know how to teach!’ So he said, ‘Just share the insights you’ve had that work for you.’”

Aish sent Firestone a group of young professionals. They came to his house, sat in his living room, and studied Jewish wisdom together. “They must have liked it,” Marc recalls, “because they came back the next week.”

Today, Firestone devotes hours of time each week to turning Jews on to their heritage. In the reception area of the life insurance office that he shares with business partner Richard Horowitz, Marc leaves stacks of Jewish books such as Why Marry Jewish? and Jewish Matters. The books are placed alongside the Wall Street Journal, explains Marc, “so that people get the idea you can be successful in business and at the same time have a relationship with God.” 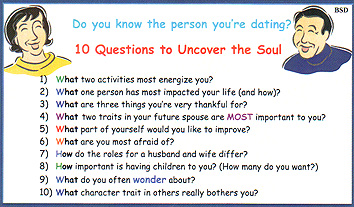 In this age of 30-second sound bites, Marc also understands that Jewish attention-grabbers need to be not only user-friendly and practical, but nearly Twitter-like in brevity. To that end, Marc has developed a series of Jewish info cards that offer a fast way to convey deep information.

One of the most popular asks, “Do you know the person you’re dating?” and lists 10 substantive getting-to-know-you questions to be asked on a date. Another asks Rabbi Noah Weinberg’s famous question: “Do you know the purpose of your life?” followed by a simple exercise to help discover it.

“People often ask me if they can buy these books and cards. I say no, but you can have them,” Marc observes. “They fly out by the hundreds. People have married Jewish and become connected as a result of them.”

How did this one-man Jewish PR machine get started?

“I was on the typical success track – chasing the American Dream – which would have likely ended in divorce, a fat 401k plan, and the big scary question of 'What is life about?'

“I had no idea what Judaism was. As far as I was concerned, it was an antiquated boring history of a nation which had no relevance to my life or to the modern world.”

What changed Marc’s perception? The answer is two-fold:

“I was invited to a Shabbos table where I saw a happy, well-adjusted family who knew how to communicate and respect each other. There was good food, meaningful conversation, and no plasma TV screen interrupting it all. I kept thinking: What’s wrong with this picture? The only observant Jews I’d known were from television stereotypes. Yet here were high-functioning, happy, loveable Jews. And I asked myself: What do they have that I don’t have?” 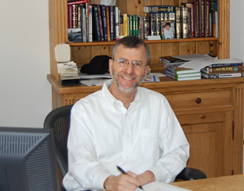 Marc continues: “I thought it must have been a fluke, but I came back the next week and the scenario repeated. Slowly, slowly, my wife and I started trying it out ourselves.”

The second thing that turned Marc’s life around?

“I started attending Torah study classes, and it became clear to me that the Torah is full of practical wisdom. I remember studying the story of Cain and Abel. Cain was an under-achiever, and was depressed to see his brother Abel performing to potential. God said to Cain: ‘Don’t be sad. Okay, you failed. So try again and I’ll gladly accept an improved version of your actions.’ But Cain made a different choice: to kill the competition.

“The take-away from this story is that if I make an honest effort to do my best, the sadness and anxiety of failures will disappear. This is an incredibly powerful life lesson – and it’s right there in the words of the biblical story. When I walked out of that class, I knew deep inside this was the most authentic piece of wisdom I’d ever heard in my life.”

In partnership with his wife Beth, Marc spends precious time and energy reaching out to fellow Jews. Does he ever feel that he’s imposing on others?

“I go about my business in a normal way,” he explains, “and in the course of things I hope that people are positively influenced by what they see.”

Indeed, Marc’s secret is that he is relaxed, smart, connected to the world – and normal. “The key for me has been sincere caring,” he says. “When I help another Jew, it’s not conditional on any religious component. The goal is simply to help them become more happy, fulfilled human beings.”

If I have something valuable, I want to share it.

He explains: “Imagine someone bought a lottery ticket, and it was the mega-million winner, but he forgot about the ticket and it never got claimed. What a tragedy! By the same token, I think about how many Jews don’t realize the precious value of their heritage. That motivates me to want to help.”

“I look at all Jews as my family, and I care about them. If I have something valuable, I want to share it. Nobody needs to pay me back. I’m helping because I genuinely care.” 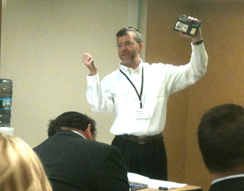 A few years back, Marc and Beth went for a weekend getaway to a beach resort where all they wanted was some quiet. Sure enough, as he walked through the hotel lobby someone called out, “Shalom!” As the only kippah-wearing guy in sight, Marc knew this call was meant for him. “After speaking with this man for a bit, I invited him up to LA for Shabbos, thinking, ‘What are the chances he’d come?’ But he came. Two years later, the man got married and moved to Israel, and sent an email thanking me for ‘showing me a gold mine.’ This confirmed that the Almighty put him in front of me for a reason. There are no coincidences.”

As a happily married father of five and grandfather of three, Marc spends hours each week in one-on-one mentoring, providing a steady role model that many people may be lacking.

When asked if he has one piece of wisdom to share with every young American Jew, Marc does not hesitate. “Be honest with yourself and ask, ‘What is the purpose of my life?’ Everybody is hungry for success in life. The problem is when you don’t have a clear definition of what success entails.”

“The Jewish people gave the world a system for success in life, for getting the most out of our short time in this world. It has been the most powerful movement for social change in the history of the world.”