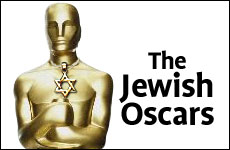 Although the films nominated for this year’s Best Picture Academy Award invariably represent a wide range of genres, styles and historical periods, they invariably disappoint at least one movie-goer each year – my Aunt Molly. How so? “They’re not Jewish enough,” complains Aunt Molly. And even when they are, they’re invariably about some kind of Jewish tragedy – “Sophie’s Choice” or “Schindler’s List,” which only serves to bum Aunt Molly out.

At long last, Aunt Molly has reason to rejoice. In a special arrangement with all Hollywood film studios, Afikomen Productions has contracted to produce Jewish versions of all nine of this year’s Oscar-nominated films. Here is a very special sneak preview of this year’s films currently in production.

It’s 1927. Brooklyn’s most admired silent screen idol, Pinchas Leiberman, is enjoying the success of his latest picture, You Call This Borscht? He loves his work and his movie star adulation almost as much as he loves his talented canine sidekick, Kreplach. Outside the theater, adoring fans and the press thrill to Pinchas’s mime presentation of the highlights from his bar mitzvah. At the front of the crowd, an attractive girl, Rivka Noodelstein, drops her challah, and as Pinchas notices and helps her pick it up, there is a moment between them, as indicated by the Klezmer background music. Pinchas gamely poses for photos with Rivka, to the delight of both the assembled press and Pinchas’s mother Malka who reads of it in The Jewish Daily Forward the next day.

The Haimish Descendants
Land baron Chaim Zuckerman’s family has lived in Miami for generations and owns 25,000 acres of undeveloped land in Florida, held in trust, which ends in seven years. If Chaim decides to sell the property to blintz baron Mendel Hochtman, it could very well change the face of Florida, not to mention the worldwide blintz industry. Oh, and Chaim’s wife Esther is on life support after a shuffleboard accident. While pondering the land deal, Chaim decides to take his rebellious daughter Naomi and his semi-rebellious daughter Batsheva on a trip from Sarasota to West Palm Beach to confront the young accountant who was doing Esther’s tax returns in a very unorthodox fashion before her misfortune.

Extremely Annoying & Incredibly Nagging
Beneath his father’s yarmulke in a closet, a couple of years after his father died tragically in a senseless pastrami-slicing mishap, nine year old Nimrod Freudenberger discovers a slip of paper with a woman’s name – Yochana Frumkes. The name was written in his father’s handwriting, he’s sure of that. But which of New York’s 417,971 women named Yochana Frumkes is this one? So begins a quest that takes Nimrod – dreidel collector, ruggelach lover, and amateur detective – across New York’s five boroughs to nudge, nag and negotiate with friends, relatives and complete strangers, including many goyim. Will Nimrod finally encounter the Yochana Frumkes he seeks? Will he solve his father’s mystery? Will you need a box of Kleenex to make it through this movie?

The Jewish Help
Set in Beverly Hills during the 1960s, The Jewish Help is the story of Leilah Koplowitz, a California society girl who returns from college determined to become a comic book writer and artist. Leilah turns her friends’ lives – and all of Beverly Hills – upside down when she decides to interview the Jewish women who’ve “married up” into prominent Beverly Hills families and have spent their lives shopping, lunching, and getting massages, manicures, and new hairstyles. Tsipporah Pinsky is the first to open up, to the dismay of friends in her tight-knit Jewish community. Soon, more women come forward, unlikely friendships are forged, and they all get caught up in changing times – at a Jackie Mason concert.

Hugowitz
Giddel Hugowitz is an orphan boy living in the walls of a deli in 1930s Brooklyn. He fixes kitchen utensils and cookware as he learned from his father and uncle. The only thing he has left that connects him to his father is an antique bagel robot that doesn’t work. Giddel must find its cream cheese-shaped battery. On his adventures, he meets with a cranky old rabbi who comes in daily for the whitefish special. He also meets the rabbi’s daughter who is on her own quest for the city’s perfect matzoh brei. Giddel finds they have a surprising connection to his father and the bagel robot. As Giddel discovers that connection, the rabbi starts remembering his past and his connection to the nearly extinct world of deli robots.

Midnight in Jerusalem
Menachem and Yaffa travel to Jerusalem as a tag-along vacation on her parents’ business trip. Menachem is a successful attorney, but is losing his passion for the law. He falls in love with Jerusalem and thinks they should move there after they get married, but Yaffa’s heart is back home in Long Island. She does not share Menachem’s romantic notions of the city or the idea that the 1920s was the golden age – especially since Israel wasn’t founded until 1948. When Yaffa joins her friends for a Hora flash mob, Menachem takes a walk at midnight and discovers what could be the ultimate source of inspiration for his Distressed Company and Bankruptcy Litigation work.

Matzohball
After losing all his money in a Mah-Jongg tournament, horse owner Dov Gross realizes he is handicapped with the lowest possible salary package to offer jockeys, not to mention to purchase horses. Dov must find a competitive advantage. He finally does so in recent Tel Aviv University graduate Shmuel Levi. Levi’s system of evaluating horses and jockeys uses 35 statistical factors plus the “vibe” Shmuel gets from them. With Shmuel’s help, Dov is about to turn horseracing on its ear, hire Dov as his executive assistant, and finally manage to move out of his mother’s home.

The Jewish Tree of Life
The film follows the 1950s life journey of the eldest son, Menachem, from the innocence of his childhood to his disillusioned adult years as he tries to reconcile a complicated relationship with his father, the town mohel, who is disappointed that Menachem refuses to follow in his footsteps. “I am not a mohel; I’m a human being!” Menachem finds himself a lost soul working in a bottled herring factory, seeking answers to the origins and meaning of his wife Bathsheba’s addiction to “The Howdy Doody Show.” We see how both brute nature and spiritual grace shape both our lives and our love of pickled seafood and children’s entertainment.

War Hamster
Set against a sweeping canvas of the Bronx and Queens during the First World War, War Hamster begins with the remarkable friendship between a wild hamster named Pinchas and a young man named Shadrach, who tames and trains him, using Torah teachings as a guide. When they are forcefully parted, the film follows the extraordinary journey of the hamster as Pinchas moves through the war, changing and inspiring the lives of all he meets and seeking out seeds, pellets, fruits, vegetables and berries. The First World War is experienced through the journey of this hamster – an odyssey of joy, sorrow, passionate friendship, high adventure, and exercise wheels.

Board Games With A Jewish Twist!

Guide to the Hungry and Perplexed

Bishop Williams: I'm Sorry...Kind of
Why My Iranian Mother Didn’t Want Me to Become a Religious Fanatic
The Jewish History of Prague
Why the Sexual Revolution was Bad for Women
Comments
MOST POPULAR IN Jewlarious
Our privacy policy
Aish.com Is Looking for Great Writers