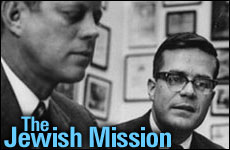 Theodore Sorensen and the Jewish drive to change the world.

Most people will be forgiven for not imagining that the late Theodore Sorensen, President John F. Kennedy’s close confidant and speechwriter, born in Nebraska to a father whose first name was Christian, might be Jewish. But in the eyes of Jewish law he probably was.

Mr. Sorensen, who died on October 31 at the age of 82, was born to a Russian-Jewish mother, Annis Chaiken, although he was raised as a Unitarian. He was responsible for much of the soaring oratory associated with President Kennedy, who once called the celebrated speechwriter his “intellectual blood bank.” Sorensen had an extensive role (some say a full-fledged ghostwriting one) in producing Kennedy’s Pulitzer Prize-winning book “Profiles in Courage,” and the president included him in important foreign policy discussions, including those revolving around the 1962 Cuban Missile Crisis, a truly hot point in the Cold War.

Although Sorensen was not a self-promoter, his death brought focus to the considerable role he played in the Kennedy White House and, thus, in American history. And, for those who take pleasure in (or are suspicious about, or just find curious) the influence that Jews – recognizable as such or not – have come to wield on world affairs over the ages, he was but another good example.

Why are Jews moving and shaking both ends of the political seesaw?

As he was an example of the particular prominence of Jews in progressive causes. In his teens, Sorensen registered with the military as a conscientious objector and in his later years he relentlessly championed liberal ideas and ideals, working with Nelson Mandela on voter registration in South Africa and with President Obama’s presidential campaign. He served, too, as a board member of the International Center for Transitional Justice, which seeks to pursue accountability for human rights abuses.

Such activities well fit the stereotype of the American liberal Jewish activist, which engenders pride or disdain depending on the observer. What is striking, though, is how noticeable Jews are on the other side of the American political spectrum as well. The Kristols and Podhoretzes, peres et fils, are examples that most readily come to mind. But there are many others. New York Times columnist David Brooks famously observed that for some people, “con” in the word “neocon,” is “short for ‘conservative,’ and neo is short for ‘Jewish’.”

So how exactly does one make sense of the fact that Jews, presumably channeling some deeply-ingrained ethnic inclination, end up moving and shaking both ends of the political seesaw?

One approach is to simply note that Jews tend to be cerebral (a generalization, to be sure; many of us don’t seem to do much thinking at all) and so there will always be a good sized pool of bright and motivated Jews from which influential political players and activists of varied stripes will emerge.

But there is something else at work here, and it has less to do with brainpower than with a sense of Jewish mission, of wanting to better society. To effect, in the phrase fashionable these days in some Jewish circles, “tikkun olam” – the “perfection of the world.”

And that drive, holy at its roots if not always in its fruit, has long taken Jews in different, sometimes diametric, directions. Wherever on the political/social spectrum they may end up, though, what drives them there – often without their realization – is sourced in a desire… to serve God.

Yes, God. The Torah makes clear that the Jew is intended to be an instrument of the Divine, to help bring the rest of the world to recognition of His glory. That is true tikkun olam, as the phrase is used in the Aleinu prayer. Every Jew is hard-wired to want to do the will of the Creator.

The shame lies in the obliviousness of most Jews to how, in fact, they can create a better world. To be sure, Jewish tradition requires empathy and charity; as it does personal responsibility and morality – “liberal” and “conservative” ideals alike. But the Torah’s bottom line is that the observance and study of its laws comprise the ultimate path to perfection – our own personal perfection and that of the entire world.

Many Jews would – and do – scoff at that contention. God, if they think of Him at all, is there to be beseeched for sustenance, health and success. But making a better world, they insist, requires political or social activism; observing often challenging or arcane laws and studying ancient texts could not possibly lead to world peace, security and human welfare. Of course, the scoffers will happily use their computers without a thought to how this or that click here or there manages to yield this or that effect. But to imagine that the Engineer of the universe may have programmed His creation to respond to Jews’ observance of the Torah’s laws somehow taxes their imagination.

And yet, the seed of that truth lies waiting somewhere in every Jew’s soul. Sought out and nourished, it will grow.

The nourishment might be said to lie in a paraphrase of a thought often associated with Theodore Sorensen (although he insisted the words were those of his boss, the 35th president): “Ask not what your Creator can do for you. Ask what you can do for your Creator.”

The Battle on Campus
Saadiah Gaon, Rashi and Maimonides: How Three Rabbis Revolutionized Judaism
King Sennacherib and the Siege of Lachish
Three Small and Easy Changes to Add Positivity in Your Home
Comments