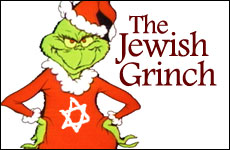 As a Jew, I love the Christmas season, because it reminds me that I am different.

December, 1993.  The scene: Riverdale, New York.  An almost entirely Jewish enclave directly north of Manhattan. I’m wearing a “fency” dress I picked up at an upscale re-sale shop, reduced from $2,000 to $125 that no doubt was originally “gently” worn by a bulimic heiress. True, the waist was around my neck, however at that price I would have worn a kitchen curtain.

My boss at the time, the late, ever fascinating, Douglas Marland, head writer of As the World Turns, is picking me up for an evening of theater.

As I tumble into the car, he looks at me oddly. Okay, the dress frightened him. But more to the point ...

“It never once occurred to me what it must feel like to be an outsider on Christmas.”

Here we are, a few days before Christmas. Houses across every hamlet in America are strung with red and green lights, trees, holly boughs — and then there was here. A tiny turf in the Bronx with nothing but the faint orange glow of Menorahs peeking demurely out of windows into the winter night.

Undaunted, I explain, which kicks off a discussion of what it was like to grow up in the fifties as a Jew in a non-Jewish neighborhood. For once, this master storyteller is rendered speechless. Finally: “You know ... it never once occurred to me what it must feel like to be an outsider on Christmas.”

Call me a yiddle-Grinchy, but the best part of the Christmas holidays for this Yiddishe maidel isn’t the short movie lines, the “cheer,” or even the Kosher Chinese.

As a kid in the 1950s, living my first eight years in a working-class, mostly Catholic neighborhood, Christmas was hoo-ha time – for everyone else. Each attached little house was aglow, “astring,” with reindeers, Santas, crèches, adorned trees, and enough red and green to set off a civil alert system.

Back then, before political-ecumenical “correctness,” my parents were firm. WE were Jews. Jews don’t “do” Christmas. They possessed no “modern” notions of “Hey, let’s all assimilate and join in the spirit with “Chrismukkah” bushes, tiny (but tasteful) wreaths, and little red stockings.

And, back then, public places, such as schools, didn’t “know” from “our” holiday. Christmas was everywhere but in my home (and those of a few Jewish neighbors). Our Festival of Lights was all but ignored. Never once in chorus did our teacher (who himself was Jewish) suggest we do a rousing, four-voice rendition of “Dreidel Dreidel Dreidel.”

In fairness, Christmas is the Big-Time for Christians. Chanukah for We Jews … eh, not so much. We lit a real Menorah each night, said the prayers, told the remarkable story, ate latkes with sour cream, and sometimes got a token gift.

Sure, as a kid, seeing the haul the Potenza kids raked in Christmas morning was a little daunting. After all, how can you compare walky-talky-wetsy dolls, Lionel trains (created by a Jewish boy), bikes, and enough wooden logs to make Lincoln a duplex, with a small mesh bag of chocolate Hanukkah "gelt?"

Yet, with all due respect for child-experts to come who made a case for “Christmas-envy,” I wasn’t envious. Or jealous. And, my parents never used the “assimilation” means “Christmas-is-secular-love of peace-so-you-won’t-feel-deprived” gambit. We had our own holidays, and could still love American traditions, and holidays, but Christmas is not secular. It’s for Christians.

Nor did they worry that I’d be psychologically scarred by being an “outsider.” If I was an “outsider” – so what?  Over the course of 3,000 years, how often were We Jews “insiders?” Even at that young age, there was something about “outsider” status I found appealing. (I was a weird kid.)  But my parents’ adamant view, along with their love and pride in Jews and Judaism, made me turn “outsider” to “different” – one who was part of a “special” group.  Besides, I could always play with “their” gifts anyway.

Granted, my friends love Christmas, even with the work, the cost and the shlepping. And I love seeing them joyous.

But being the “outsider” has definite benefits. For one: “Have you bought gifts, lights, decorations, cards yet?”

The best part of being an “outsider” to me?  For 12 days, America shuts down. It’s busy.

And I’m not. For 12 days a year, with the exception of some repetitive TV programming (How often can one human watch “It’s a Wonderful Life” or listen to a “Very Brady – fill in the name- Christmas”), I love being left out. No e-mails, submissions, government offices hocking. Once a year, I can bask in my “outsider-ness” – to think, ponder, create – all in splendid guiltlessness.

I believe fervently in Peace on Earth all year. But there’s a lot to be said for a little private peace during the Christmas holidays, especially if parents raise children to believe, as I was, that while one can respect others’ right to believe and celebrate as they wish …