The Jewish Ethicist: You Need This 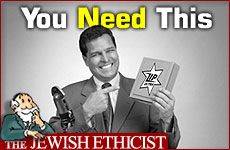 What was previously a luxury may become a necessity.

Q. Marketers sometimes try to convince us to buy things we never thought we wanted. Is that ethical?

A. Advertisers and marketers are always trying to induce consumers to buy their product or service, but the means are varied. Some ads merely provide pertinent information about the attributes and price of a product already sought by the consumer; this kind of advertising is uncontroversial. Sometimes the ads provide absolutely no information about the product; the object is to associate the product with a particular image and thus persuade the consumer that it will advance him in projecting or realizing that type of image.

But often marketers are involved in the business of "want creation". They will try to convince a consumer that a particular product, which they have never contemplated buying, can serve their needs. Contemporary secular commentators are divided on this topic. Economist and social critic John Kenneth Galbraith refused to consider created wants as real wants. He wrote that "the tendency of wants to rise as production rises, as a consequence of that increased production . . . implies that it cannot be assumed that consumers' utility will rise with production."

By contrast, advertising pioneer Bruce Barton asserted a generation earlier that astute marketing is needed to overcome the natural hesitance of consumers to adopt new habits that can really make their lives better.  Barton wrote in 1925 that "Elias Howe invented the sewing machine, but it nearly rusted away before American women could be persuaded to use it" because Howe was not a gifted salesman. By Barton's time, it was taken for granted that the sewing machine brought a great advance in standard of living.

I believe that the Jewish sages legitimized upward mobility in consumption. The Talmud sometimes uses an expression "All Israel are princes" to express the idea that even what luxury goods are not inherently beyond the lifestyle of even simple people. I understand this to mean that poor people need not consider these products out of reach, and that a desire for them is legitimate.

For example, there is a law that on Shabbat we may not use items that are designated for medicinal use except in cases of proven medical need. "Rose oil" was an expensive tincture, which poor people would only use for medicinal purposes, but wealthy people could afford to use it for a perfume. The mishna states that even poor people can use this product on Shabbat, for "all Israel are princes". (1) It is legitimate if today he thinks of it as a medicine, and tomorrow as a consumer product.

Another example is eligibility for charity. A person is eligible for charity if he doesn't have enough for his "needs", but what are these needs? The authoritative codifier Rabbi Yaakov ben Asher rules that these are different from one generation to another. An amenity that is luxurious in one generation may be considered a basic necessity in another; "everything is according to the place and time".(2) Once running water was considered a luxury, but today someone who lacked running water would be considered to be living below subsistence. So this is a created need, but one that is given legitimation within Jewish life.

Of course this insight does not legitimate any kind of advertising. Some goods or services are inappropriate for a Jewish lifestyle; others may induce envy or overspending. Even if it is proper to encourage people to adopt a product they are unfamiliar with, proper means have to be used in doing so; for example, we discussed a few weeks ago Judaism's disapproval of provocative messages in advertisements. But the basic idea of trying to convince someone to buy a product he didn't even know he wanted is not unethical.

Faith and the Stock Market

The Jewish Ethicist: Favorable Judgment
G-d Time
Shavuot is The Holiday of Cheesecake and Blintzes
What Does Kosher Mean Literally?
Comments
MOST POPULAR IN Current Issues
Our privacy policy