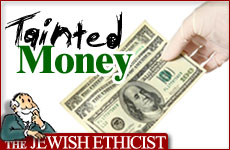 Charities should not accept donations tainted by wrongdoing

Q. A wealthy person has offered to make a generous donation to our charity. The problem is that this person's rectitude has been questioned in the past. Should we take the donation?

It is forbidden to change money from the purse of the [self-appointed] duty and tax collectors, and it is forbidden to accept charity from there. But we accept it from them at their house or in the marketplace. (1)

Self-appointed tax collectors were the ancient equivalent of protection or extortion rackets, and their "official" till was all stolen money. Regarding the permitted money they give privately, the Talmud adds that if all their private money is from the stolen income, that is forbidden too. (2) It seems that in the case of a known thief, we need to know the composition of the person's wealth.

In the time of the Talmud, it was the norm that the husband had control of the family accounts. Even so, housewives had a certain amount of discretion in household expenses, and it is taken for granted that their husbands have no objection to them giving a small amount of money to charity on their own. However, a large donation needs the approval of the husband, who in most cases was the owner of the wealth.

As Maimonides points out, the case of housewives is only an example. Anyone who has access to someone else's money but not broad authorization to spend, the charity collector needs to evaluate if there is a likelihood the donation is not properly authorized. (3)

What then do we do when a housewife offers a large donation? From the comments of later authorities it is clear that we don't need to just send her home. What is needed is to clarify the legitimacy of the donation. If she is a trustworthy person and affirms that she has permission from her husband, she can be believed. (4) In other cases we need to consult the husband directly. The application to your case is that before accepting the donation, you must examine the source of the donation and satisfy yourself that the donation is totally legitimate.

An additional perspective is in the following Midrash. The verse in Proverbs (28:8) states: "One who enlarges his wealth through usury, he is [ultimately] collecting it for the benefactor of the poor." The Midrash states: "This is like the governors and dukes and counts who go out and rob and despoil cities, and when they return they say, 'Bring us poor people so that we may support them'". (5)

We see that the phenomenon of people who obtain money through nefarious means, yet then seek to use it to benefit others, is far from new.

Every person deserves the benefit of the doubt, and the fact that accusations have been leveled at a prospective donor doesn't automatically preclude accepting a donation. But it does mean that you have the responsibility to invest some effort in clarifying the source of the money.

The Jewish Ethicist: Living Benefits
G-d Time
Shavuot is The Holiday of Cheesecake and Blintzes
What Does Kosher Mean Literally?
Comments
MOST POPULAR IN Current Issues
Our privacy policy