The Jewish Ethicist: My Idol! 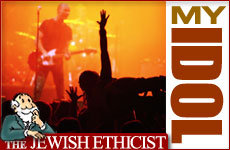 Spiritual danger arises when performance is given a status far beyond its marginal importance.

Q. What does Judaism say about our culture's tendency to make heroes out of leaders in sport and popular culture?

A. There can be no question that sports stars, actors and musicians are cultural icons and leading role models in modern secular culture. Some of these individuals take serious the responsibility that comes with their status and do their best to be exemplary role models; quite a few display disgraceful behavior. The more fundamental question is, does Judaism legitimate making success in these pursuits the source of admiration and emulation?

Theater and sports are viewed very suspiciously in the Talmud, to say the least:

Rebbe Meir makes the obvious point that if theaters and arenas are places of idol worship, Jews may not attend. The sages add that these activities, even if there is no actually idolatry involved, are forbidden because they associate the spectator with vain individuals and in vain pursuits that distance a person from God's service.

It is possible to understand that the ruling of Rebbe Meir and that of the sages are unrelated; theaters and arenas are sometimes a place of idol worship, and always a place of vanity and idleness. But it is possible also to discern a connection. The forbidden vanity of these venues is somehow intimately bound up with their connection with idolatry. Somehow there is a persistent tendency to elevate public spectacles from something merely amusing or diverting to something holy and obligatory – from something with the potential to season our spiritual life to something with the potential to displace it.

This same built-in danger is evident in the modern tendency to exalt the leading figures in these fields. Even the terminology we use is fraught with idolatrous overtones: a person is a "stage idol", a "cultural icon", a "star". Somehow movie and sports stars are transformed from talented individuals with an appreciated skill to something exalted and transcendental, to heroes and leaders.

That doesn't mean that there is never any redeeming value in these pursuits. In previous columns on the topic of Judaism and sports, we pointed out then that participating in and viewing informal athletic contests were common and sanctioned, in Jewish communities in Europe centuries ago, just as they are today.  The problem arises when sports is elevated from a mere pastime into a kind of a sacrament.

Likewise, drama is not ipso facto banished from Jewish life; in fact, one of the great rabbis of the Enlightenment period, Rabbi Moshe Chaim Luzatto, wrote a number of verse plays. Here also, the spiritual danger arises when drama – movies, plays, television etc. – is given a status far beyond its legitimate but comparatively marginal importance in a Jewish life and lifestyle.

One Talmudic term for idolatry is avodat kokhavim, literally "serving the stars". It seems that every generation has its own variety of idolatrous urges and tendencies, and its own brand of stars which some people feel a need to serve, whereas a proper understanding and awareness teaches us that their unique qualities were granted by God to serve us.

The Jewish Ethicist: How Far is Wall Street from Las Vegas Boulevard?