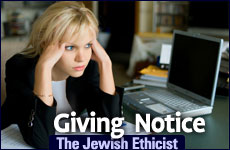 Do I have any duty to stay on until my boss finds someone else?

Q. I'm not really enjoying my work in a store, but I am reluctant to leave the boss in a lurch before the busy season. Do I have any duty to stay on until he finds someone?

A. The usual rule in Jewish employment law is that an employee may quit any time he likes without penalty. This is considered an essential expression of human freedom; the Torah tells us that the children of Israel should not be slaves, as God commands "To Me the children of Israel are servants; they are My servants, for I took them out of the land of Egypt" (Leviticus 25:55), (1)

This principle does however have one reservation and one exception. In the time of the Talmud, the usual work situation was day labor. The Talmud provides as we stated that a worker is allowed to quit even in the middle of the day, but many examples demonstrate that in most cases workers would not quit without a compelling reason. Many authorities state that if the worker quits in midday only in order to make a higher wage elsewhere, that is not even considered an expression of freedom and he is liable for breach of contract. (2)

Contract or local custom probably provides for a standard notice period. For jobs like store work which involve minimal training, this is often about two weeks. If you don't have a compelling reason to quit suddenly, you should stay on the customary notice period.

An exception to the rule is when leaving actually causes the employer a loss. In this case, the employee is actually not allowed to quit – again, unless there is a very compelling reason.

But it is important to understand that Jewish law gives a very narrow definition of what it means to cause a loss. It does not mean that the employer will lose money because he doesn't have an employee on hand; it means that the loss is actually caused by the original work agreement being breached.

Another example is a band for a wedding reneging on very short notice; if the first band had declined then another one would easily have been found, but now that the first one agreed another cannot be found so quickly without offering a meaningful bonus. (3)

It would be unusual for this to apply in the store. A possible example would be if the store bought an unusual amount of inventory based on an informal commitment or understanding that the worker would stay on; if the boss had suspected you might leave he would have bought less stock.

Another relevant consideration here is that your job is not particularly skilled. There are comparatively few people sufficiently skilled to perform at weddings, and few laborers in the time of the Talmud knew how to work with a caustic bath. So quitting suddenly truly put the employer over a barrel. But many people can be trained to do a respectable job in a store so there is no reason to think that by quitting you will leave your boss open to extortion by prospective hires.

If you merely don't like your job, as opposed to having some compelling and urgent reason for quitting, you should observe the customary or contractual notice period, usually two to four weeks for less skilled jobs. If as a result of your taking the job the employer entered into some commitment that requires your participation to fulfill, you should be careful not to leave him over a barrel. But in your case you are probably merely requiring him to go about the annoying but totally normal process of interviewing and hiring a new salesperson. This is one of the ordinary headaches that go with being a proprietor, and you – a mere employee – are not ethically obliged to take this headache away from him.

The Jewish Ethicist: When to Blow the Whistle

The Jewish Ethicist: Witness for Hire, Part 2
Is Grease the Word?
Dried Fruit Compote
Scientific Curiosity and the Divine Encounter
Comments
MOST POPULAR IN Current Issues
Our privacy policy
Aish.com Is Looking for Great Writers