The Jewish Ethicist: Demanding a Raise 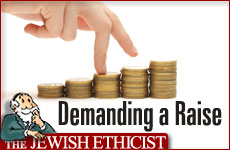 Do I have to give my employee a raise?

Q. I have a hard-working worker who is demanding more money. Do I have to negotiate with him?

A. This is probably the most common question I get: workers who feel they are underpaid and would like to compel their employers to pay what they are truly worth, and employers who face employees who insist on it.

Most authorities agree that the underlying employment paradigm in the Talmud and Jewish law is at-will employment, meaning that the sides are obligated only by their work agreement. The employer is free to discharge the employee at any time assuming the agreed-upon employment period is done (usually this is a month though often there is a requirement for a month or more of notice), and the employee is free to quit any time, even before the employment period is over. Another principle of Jewish law is that work agreements are assumed to be according to local law and custom; since most common law countries also have a rule of at-will employment, if you live in such a country then the underlying paradigm and the validation of secular law would give two reasons to give you the right to discharge your employee according to your best business judgment.

The Talmud relates in a number of places to the situation you describe: where the employee is convinced that the true value of work is higher than that agreed upon.

In one case, the Talmud speaks of a case where a wage of four zuz is common and in fact it is possible to demonstrate that the employer would have been willing to pay four zuz had the workers insisted, but in fact the workers agreed to work for only three. The conclusion is that the workers are not entitled to four zuz, rather the payment is according to the original agreement. However, the passage also relates that if the employer was freely willing to offer four and the manager on his own initiative decided to squeeze the workers down to a wage of three, the workers are justified in harboring resentment towards the manager.(1)

In another case, the Talmud relates to a case where the wage bargain was made at the going rate, but in the middle of the contract period the wage rises. As a result the workers begin to complain, and the boss convinces them to stay on with some vague non-committal comment. (We may imagine that he says something like, "I'll make some changes to make it worth your while to stay".) The conclusion is that this does not constitute a promise to match the new market wage; rather, the employer can fulfill his obligation with some minor improvement in working conditions. (The Talmud gives the example of giving larger meals.)(2) We learn that the boss is not obligated to re-open the original agreement, but is also seems that some degree of meeting the employee halfway is justified.

I think the conclusion for your case is as follows: If you think there is some merit to the employee's demands – he is in fact making less than the going wage, like the workers in the Talmudic passages – it is a good idea to agree to negotiate. In both cases the Talmud seems to indicate that the ideal outcome involves some concessions to the worker. But the worker is in no sense entitled to a raise, and he cannot demand or insist on one. If you don't think the demand is justified, there would not seem to be any ethical requirement to discuss the matter.

Of course the worker is a free actor as well, and is totally within his rights to make whatever demands he likes and to quit if they are not made. If your worker does a good job it is may be simple good business sense to make him happy. But he does not have the ability to agree to stay on yet compel the employer to meet his demands, even if they are reasonable ones.

The Jewish Ethicist - Day Trader
For Every Individual, A Torah Scroll
Allegiance To The Monarch
Meet the Real You: Yom Kippur
Comments
MOST POPULAR IN Current Issues
Our privacy policy
Aish.com Is Looking for Great Writers