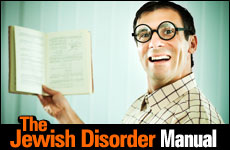 My very own Diagnostic and Statistical Manual of Mental Disorders for my very own people.

As a writer, and slightly quirky therapist who believes in skill, creativity, and passion as a road to healing (along with free speech), there’s a book I strongly suggest you shred should you come across it. It’s the DSM (Diagnostic and statistical Manual of Mental Disorders), or as I call it, the “SMD” – “Stupid, Mindless Diagnoses.” Yet pros are forced to read it, and worse use it. Why? To fill out forms.

Simply, it lists all manner of “mental and emotional” dysfunction, which are numbered, sub-numbered, subtyped, subgrouped, clustered, with a gargantuan laundry list of symptoms, which can be seasonal, occasional, alone or in combination with everything else in the book.

Trust me, mamalas. If you read it, you’ll think you’re so meshugge, you’ll check into a clinic in the Alps, with a whole team of Swiss shrinks just to treat you.

But what they label a “problem” for some, may be perfectly normal, healthy, positive Jewish behavior!

So, in defense of our people, I’ve devised a short DSM for We Jews, which as you’ll see, has nothing whatever to do with that book and truly describes how our mishegoss is different from the book’s mishegoss.

*Note: Before I get “you-heartless-chaya-who-has-no-compassion-for-mental illness e-mails” there are people of all stripes suffering greatly to whom I’ve devoted my life to treating with love, compassion, and I hope skill. Each of us is God’s creation -- a custom job. Which is why I hate the BOOK!

THE JEWISH DSM (DIAGNOSTIC AND STATISTICAL MANUAL OF MENTAL DISORDERS)

Essential Features: The inability to engage in five or more tasks simultaneously, or to switch actions and thoughts within 15 seconds.

Healthy Jewish Behavior: What “they” call a problem, we call rapid-speed multi-tasking. My bubbe alone could escape from the Czar, bribe border guards, while carrying boxes on her head, and family on her back to the U.S. Then later, make a holiday with seltzer and silly string, clean so you could operate, find lost keys in a mall, while arguing with Tanta Dora, criticizing my outfit, and slicing brisket from her purse, one-two-three. For We Jews with a 3,500 year history of having to flee at a moment’s notice, “hyper-activity” is not only normal, it’s a necessary survival skill.

Essential Features: Allowing your children excessive independence, for example: letting them eat what they want, take a year off from school to “find” themselves, move out, become an “eco-preneur”, choose a mate, pierce anything but two earlobes – and be okey-dokey with all of it.

Healthy Jewish Behavior: Unlike “them,” We Jews attach like Velcro to those we love, we know, and Jewish strangers we meet in Loehmann’s, but most especially to the kinder. It’s called involvement. And who among us hasn’t a child (whether they know or appreciate) who doesn’t require our continuous attachment to guide them correctly during those difficult years between nursery and nursing home? The result? More Jewish “children” are in medical school than reform school.

102:2: Allowing the above independence when your children are under 40, is a far more serious disorder.

Essential Features: An inadequate degree of anxiety, which includes, but is not limited to a pervasive feeling that all is, and will be well, so why worry? Examples of symptoms include resting comfortably when your daughter is 30 minutes late, your son is taking his first solo drive, a loved one has a cough.

Healthy Jewish Behavior: We Jews haven’t had it easy, so we’ve learned that bad things happen to good people – often to us. (It’s a fact. Look it up). So constant anxiety is a wise preventive/reactive measure. Your teen is late? True, it’s more likely she lost her watch than was hijacked on the Grand Central Parkway? BUT … is it wiser to start the hunt for her quickly, just in case? A cough could be a piece of stuck brisket. BUT, it could also be a sign of early pneumonia. Only an idiot would fool with pneumonia. Right?

Essential Features: An inability or substantial dislike for argumentation, characterized by general agreement with anyone/everybody else, regardless of the issue, or the fact that you know better.

Healthy Jewish Behavior: We Jews have been known to have opinions and express them, debate, argue, take the opposing view for stimulation – and fun. This is why Moses could attract a crowd, Joan Rivers has her own show, and Jewish family dinners sound like a Toastmasters meeting. Your sister-in-law brings her own “better” brisket to your table? The president of the Sisterhood thinks your dress isn’t frum enough? Your Jewish neighbor believes the Palestinians have a point?! Any opposing response is not only made, but loud enough to drown out a pneumatic riveter. Trust me. Our tiny group didn’t win Nobel Prizes and start a country without making a major tsimmis.

Essential Features: The belief one suffers from anything involving “polar.”

Healthy Jewish Behavior: We Jews run from the very mention of the word “polar.” Whether we’re talking “brains” or “regions,” we don’t associate with any concept that reminds us of Siberia. How many Jewish people have shlepped to Alaska, or the Arctic to shake off their emotional ups and downs (or find their bashert)? From ancient times, we’ve known that humans live longer and healthier in either Miami or a desert. Mamalas, the word “polar” is for bears, not Jews with the blues!

Should you suffer from any of the above conditions I’ve described, take two pieces of sponge cake and call me in the morning.

How Jews Visit the Sick

Survivor - Family Vacation Edition
For Every Individual, A Torah Scroll
Allegiance To The Monarch
Meet the Real You: Yom Kippur
Comments
MOST POPULAR IN Jewlarious
Our privacy policy
Aish.com Is Looking for Great Writers