The Indignity of Atheism 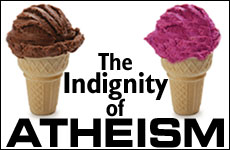 One who sees only random forces behind why we humans find ourselves here is ultimately bound only by his wants.

Back on March 12, a paean to "the dignity of atheism" appeared on The New York Times op-ed page. It was penned by celebrated philosopher Slavoj Zizek who, had he consulted the same periodical's obituary page a mere three days earlier, would have come face to image with the late Richard Kuklinski.

Mr. Kuklinski, who was retired from life at the age of 70, claimed, utterly without remorse, to have killed more than 100 people as a Mafia enforcer; his favored methods included ice picks, crossbows, chain saws and a cyanide solution administered with a nasal-spray bottle.

The happy hit man's example might not have given pause to Professor Zizek, the international director of the Birkbeck Institute for the Humanities. But it should have.

Because the notion that there is no higher authority than nature is precisely what enables people like Mr. Kuklinski -- and the vast majority of the killers, rapists and thieves who populate the nightly news.

No, no, of course that is not to say that most atheists engage in amoral or unethical behavior. What it is to say, though, is that atheism qua atheism presents no compelling objection to such behavior -- nor, for that matter, any convincing defense of the very concepts of ethics and morality themselves.

The reason is not abstruse. One who sees only random forces behind why we humans find ourselves here is ultimately bound only by his wants. With no imperative beyond the biological, a true atheist, pressed hard enough by circumstances toward unethical or immoral behavior, cannot feel compelled to resist. Why should he?

To a true atheist, there can be no more ultimate meaning to good and bad actions than to good or bad weather.

In his view, a purposeless process of evolution has brought us to where we stand, and our feeling that there are good deeds and evil ones is but a utilitarian quirk of natural selection -- like our proclivity to eat more than we need when food is available. And so, just as we might choose to forego a second helping of pizza if we harbor an urge to lose weight, so may we choose, for personal gain (of desires, not pounds), to loosen our embrace of a moral, ethical life. Biological advantages, after all, are not moral imperatives.

Atheism, in the end, is a belief system in its own right, one in which there can be no claim that a thieving, philandering, serial murdering cannibal is any less commendable a member of the species than a selfless, hard-working philanthropist. In fact, from an evolutionist perspective, the former may well have the advantage.

To a true atheist, there can be no more ultimate meaning to good and bad actions than to good or bad weather; no more import to right and wrong than to right and left. To be sure, rationales might be conceived for establishing societal norms, but social contracts are practical tools, not moral imperatives; they are, in the end, artificial. Only an acknowledgement of the Creator can impart true meaning to human life, placing it on a plane above that of mosquitoes.

Proponents of atheism bristle when confronted by the implications of their belief, that morality and ethics are mere figments of our evolutionary imagination. But, for all their umbrage, they cannot articulate any way there can really ever be, as one writer has put it, "good without God."

The bristlers are not liars, only inconsistent; some well-hidden part of their minds well recognizes that humans have a higher calling than hyenas. But while the cognitive dissonance shifts to overdrive, the stubborn logic remains: The game is zero-sum. Either there is no meaningful mandate for human beings; or there is. And if there is, there must be a Mandator.

What inspired Professor Zizek to celebrate atheism as "perhaps our only chance for peace" in the world was the unarguably dismal example set by some people who are motivated by religion. He is certainly correct that much modern mayhem is deeply rooted in claims of religious rectitude. What he forgets, though, is that the world has also seen unimaginable evil -- perhaps its greatest share – from men who professed no belief in divinity at all, whose motivations were entirely secular in nature. Adolph Hitler was no believer in God. Nor was Joseph Stalin. Nor Pol Pot. Together, though, the trio was responsible for the murders of tens of millions of human beings. They pursued their dreams as atheists with no less relish than Osama Bin Laden pursues his as an Islamist. Evil is evil, whether expressed through faithlessness or misguided faith. But only a belief in a Higher Being has the potential -- realized or not -- of reining in the darker elements that haunt human souls.

Some of my best friends -- okay, one or two -- are atheists. Stranded on a desert island, I would prefer the company of any of them to Osama's.

But if my choice of island partner were between two strangers about whom I know only that one believes there is no higher reason for human life and the other that there is, I know which one I'd choose.

And I think Professor Zizek might make the same choice.

Deep Connection between Art and Judaism: Seasons of the Moon – Tevet