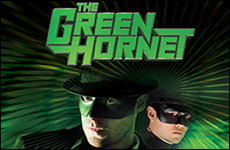 If you think that the Green Hornet looks like a mindless action movie, you’d be unfairly judging a book by its cover. Or a movie by its poster.

The Green Hornet is very much a movie about not judging a book by its cover. You may be interested to know that that expression actually comes from a phrase in Ethics of the Fathers (4:27), written long before books even had covers: “Do not look at the jug, but at what’s inside it.” To be honest, the book metaphor is kind of dated, what with all of the software that’s available. If you make book covers for a living, you should know what you’re doing. But with jugs, sometimes you take a container of orange juice out of the fridge and realize that it’s empty. You could see that there was plenty of water in the clear jug, but you thought orange juice would be better.

“Do not look at the jug, but at what’s inside it.”

We see this right at the beginning of the movie. The main villain, a man named Chudnofsky, walks into the office of a powerful drug lord, and the man laughs at him. He comes off as very non-threatening; he looks and talks like your uncle Murray – the one who’s married to the woman who’s twice his size – while the drug lord wears nice suits and has big, muscle-bound guards standing in his elbow room. But then you realize that Chudnofsky is, in fact, the unbalanced and really dangerous type of movie villain who blows up the offices of rival gangsters and walks away from the explosion without even flinching.

In truth, every superhero movie is about things not being what they seem. The Dark Knight is about a man who dresses up as a vampire and fights a clown. Which one do you think you’d root for?

Okay, so vampires are in, and everyone hates clowns. But how about the others? Bruce Banner seems like a nervous, paranoid scientist until he throws one of his temper tantrums in which he rips his pants and goes around smashing things. Clark Kent seems like a mild-mannered hypochondriac who runs in the other direction when things start going down.

And in a way, Britt Reid, the Green Hornet’s alter ego, is no different. At the beginning of the movie, he comes off as a useless, spoiled party-boy, until you realize that… well, he’s still pretty useless. His sidekick does most of the work.

But if you judge movies by their titles, you wouldn’t know that.

Green Hornet’s costume is not that impressive either. He calls himself “The Green Hornet”, but every green costume design that he comes up with looks ridiculous on him, so he ends up dressing in black. (This is why most superheroes design their costumes and then choose a name.) He does wear a green tie, mainly so he won’t confuse people. But I don’t know if it’s the best idea to wear a tie in a fight. Not after what The Incredibles taught us about capes.

But my point is that when you see Seth Rogen in a black hat and trench coat and tie, he looks less like a menacing superhero and more like a guy running late to shul.

And in fact, his costume throws people off. At some point, the entire L.A. underworld gets together and hunts down every person in the city wearing green (not a good day to be a Jets fan), because they assume that one of them is the Green Hornet. As if the Hornet wears green in his civilian identity, like the Power Rangers.

But really, everyone judges a book by its cover, especially when it comes to clothing. If you see someone wearing something nice, you assume that he has money. We’re always told to wear a nice suit to a job interview, even if the job we’re interviewing for is “sewer maintenance specialist”, and we’re not going to have to wear a suit to work if we actually get the job. But we’re not about to tell our possible future boss that he shouldn’t be judging us based on clothing, because then he’s just going to judge us for saying something.

But are you perfect? We’re all taught not to judge people based on external factors, but we all do. All Muslims are evil, all Jews are cheap, all southerners are married to their cousins who also happen to be their sisters, and (insert your elderly neighbor’s favorite epithet here).

The main reason the Green Hornet gets all the credit, of course, is that he’s the one with a codename (The Green Hornet). As of the end of the movie, we’re still not sure what to call his Chinese sidekick, whose civilian name is Kato. Everyone just knows him as “The guy who drives the Green Hornet around”, and he thinks of himself as “The man in black”, I guess because he doesn’t wear a tie.

But Kato actually does most of the work. In fact, he’s what Britt calls a “human Swiss army knife”. You think you’ve seen everything it can do, and then, “Hey, a toothpick!” Everyone assumes that he is, at best, a sidekick, but he’s really a martial arts expert and the one who builds the cars that they use. And yes, that sounds like an Asian stereotype. But just because it’s racist to assume that all Asians are good at martial arts and fixing cars, does that mean that the movie has to pretend that NO Asian guys are like that?

But my point is that judging a book by its cover doesn’t always give you a wrong answer. For example, Britt notes, when he sees sneakers hanging on a telephone wire, that they’ve entered a bad neighborhood. (I don’t know what one has to do with the other. But I do know that a lot of your nicer neighborhoods have their telephone wires under the ground.) If you never judge a book by its cover, it would take you three hours to order food in a restaurant. You would want to know all of the ingredients, including brands, and you’d want to taste the food on the plates of the other diners, rather than just saying, “Hey, that looks good! I’ll have what she’s having!” And you’d be a pain in the neck to shop with.

But when it comes to people, you can’t make blanket judgments. You can’t decide that two people aren’t meant to be together, because, for example, she’s tall and he’s short. Most people are more than one thing. You have more than one aspect to your character, and you have to assume that any given person does as well.

At the beginning of the movie, Britt judges people by their “covers”. He thinks his father was a terrible human being just because he was a lousy parent (who spends all of Britt’s childhood telling him, “There’s no point in trying if you always fail,” and then wonders why his son grows up to be a slacker). He fires everyone at the mansion who worked for his father.

But then Britt meets Kato, and realizes that he’s been judging people based on their covers. So he decides to create a cover of his own. By day, he runs his father’s newspaper – some would say into the ground – and by night he fights crime. But as he now realizes that people will judge him by their first notions, he uses his newspaper to continuously paint his own action in a bad light, so everyone thinks that the Green Hornet is a bad guy. This way, he reasons, the real bad guys will never think to threaten him with innocent lives, because they’ll figure that he doesn’t care. So now everyone thinks he’s a bad guy, no matter how much good he does. He’s the hero L.A. needs, not the hero L.A. wants.

The average person makes over 5,000 decisions every day, and some of them are going to be based on covers. But let’s hope that the important ones are not. People are three-dimensional. Shouldn’t our opinions of them be three dimensional?

Finding Israel’s Soul at the Movies

The Archenemy of Happiness

Defiance
Why Are The Prayers Of Yom Kipur So Repetetive?
Ha'azinu 5783: A Time for Unity!
Twisted Thinking
Comments