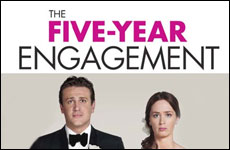 Nicholas Stoller’s new comedy about dating periods that seem to go on without end, highlights a troubling trend.

To be honest, the romantic comedy The Five-Year Engagement felt about a half hour too long. But what am I complaining about? These people were engaged for five years!

They didn’t set out to do it that way. It’s not like they planned, “We’re going to be engaged for five years, and in the meantime you’re going to grow a moustache that connects to your sideburns, make furniture out of the carcasses of deer that you hunt yourself, and wear bad sweaters, and then we’re going to break up with sad music in the background, and then you’re going to move back to California. But eventually, after an additional half hour of no romance and no comedy, we’ll realize that we were meant for each other, and we’ll get back together. Also, there’s going to be a cute kid involved, and a big guy who likes pickling things.”

Why would someone want to accomplish everything in life before they get married? Marriage is not a death sentence. It’s a life sentence.

But that’s what happened. A few weeks after Violet and Tom get engaged, Violet finds out that she’s been accepted for a post-doctorate position at the University of No-One’s-Gonna-Drive-That-Far (which is in Michigan), and Tom agrees to quit his job as a chef and follow her across the country. She promises that it will only be for two years, and they decide to push off their wedding until after that. You wouldn’t want to just get married before you leave, like her sister and his best friend, who, in the time since Tom and Violet get engaged, manage to meet, get married, and develop a sizeable baby bump (but not in that order), all before Tom and Violet leave town.

Once they’re in Michigan, one thing leads to another, and two years turns into five years. You know how it is. You do really well and are asked to continue your job. What are you gonna do, right?

But Tom goes crazy, because he gave up his job and his life and his friends, and he just wants to get back home. He starts to crack, grows the ugliest beard ever, and then everything falls apart.

There’s a lot of pressure on the start of a marriage. Conditions have to be perfect. People think they have to get their entire life plans done before they get married – like a bucket list – and that way when they do get married, it can be happily ever after.

Over the course of the movie, they make several attempts to plan a wedding, but subplots keep happening. It turns out you can’t solve all your problems before you get married, unless you get married toward the end of your life. Life is full of subplots.

From a Jewish perspective, we believe that when you meet your bashert, everything is as right as it will ever be. Pushing things off is just making time for things to go wrong. Even good news like a new job can be bad news for an upcoming wedding.

Why would someone want to accomplish everything they want in life before they get married? Marriage is not a death sentence. It’s a life sentence.

There are many reasons to postpone getting married. Stereotypically, at least in movies, the girl wants a big wedding in which everything goes perfect, even though there has never been a single wedding in the history of the universe where everything went according to plan. Our forefather Jacob spent seven years planning his wedding, and in the end he accidentally married the bride’s sister. And from the guy’s perspective, he’s afraid of commitment, which is also silly, because the vast majority of couples these days spend more years together before the wedding than afterward. The divorce rate is way higher than for breaking up after engagement, because no one wants to disappoint their grandparents. Grandparents don’t live forever, you know.

Another reason people push off getting married, once they find the right person, is, “Yeah, I know he’s right for me. But what if he’s not?” It’s too big a decision to rush in without being sure. But it’s not about thinking longer, it’s about thinking harder. Some people can be sure after a handful of dates. Others need more time.

Yes, you want to know everything about the inner workings of the other person. But that has nothing to do with time. I have a ton of guy friends, some of whom I’ve known for 30 years, yet there’s a lot I don’t know about their inner workings. It’s not about time. It’s about sitting down and having those important conversations (which I don’t care to do with them. I think that’s part of why we’re still friends). If you sit around going, “I can’t decide what to have for lunch,” but you’re afraid to start actually thinking about it, you might never have lunch.

Look at the divorce rate in this country. Do you think the 40 percent of couples who are still together are together because they dated for longer? Arguably, I’d say that the cultures with shorter dating spans have lower divorce rates – not necessarily because shorter courtships are better, but because they have all those “Let’s get to know each other” talks up front. They don’t spend years superficially hanging out while trying to get up the guts to ask, ideally during a major televised sporting event, where the other person sees the relationship going.

There were a couple of things that bothered me about the movie when I first saw it. Firstly, what did their problems have to do with the fact that they were engaged but not married? It seems that they stemmed from Tom having to uproot his life to make Violet happy. Wouldn’t they have had the same problems if they were actually married?

Also, after Tom and Violet break up, Tom moves back to San Francisco and opens his own business – selling tacos from the back of a refurbished ambulance (a very convenient combination, if you’ve ever eaten tacos off the back of a truck). And in the end he decides that even if he moves back to Michigan, his truck can just come with him. So why couldn’t he do this years ago?

But then I realized – it’s because Michigan was not his home.

In Jewish tradition, when a couple gets married, we bless them that they should “build a happy home”. But technically, they’re not building a happy home. First they’re renting a tiny home, then they’re buying a starter home, and then at some point they might build a happy home, but at the end they will probably end up in a retirement home.

In the Torah, “bayit” means “home”, but it also means “family”. When you’re married, your home is wherever your family is. It’s not a house or a city, it’s the people you live with. Tom and Violet weren’t married, so he didn’t have that. He felt like he was living in her home, and he wanted to get back to his home in California, so he could go back to work. It wasn’t until they finally got married that his home stopped being a place and started being a person.

Alexander and the Jews
Deep Breaths
What Happened to the Truth?
The Japanese Everything Bagel Spice Recipe
Comments
MOST POPULAR IN Jewlarious
Our privacy policy