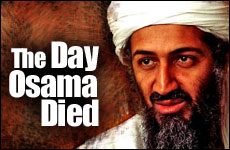 Does Bin Laden's death bring a sense of closure? It better not.

Was it just a coincidence?

Or was there perhaps some divine message in the striking link between the day on which Osama bin Ladin was finally brought to justice and the Jewish calendar which marked it as Yom HaShoah - the date selected to commemorate the Holocaust?

I have no doubt that Osama's death deserved a great measure of jubilation. The angels may have been told by God not to sing when the Egyptians drowned because it was inappropriate for them to rejoice when the Almighty's creations perished. But God offered no such criticism to the Jewish survivors of Egyptian cruelty who lifted their voices in song at the sea when they witnessed the death of their oppressors. The angels hadn't suffered so they didn't have the right to celebrate. But those who bore the brunt of Egyptian evil were entitled to exult when their enemies finally had to pay for their crimes.

The day Osama died was a day for us to be glad. We were the victims of his barbaric wickedness.

But the almost universal response to the passing of this paradigm of evil seems to ignore a powerful truth - a truth we ought to be starkly reminded of by the calendrical coincidence of Osama's demise on the very day dedicated to remembering the Holocaust.

I've watched with great interest the media's coverage of this historic event. Commentators seek out relatives of victims on 9/11 and repeatedly ask them the same question: Does Osama's death finally give you a sense of closure?

Closure would prevent us from being inspired to draw any lessons for the future from the tragedies of the past.

Imagine if the same kind of question were to be asked of Holocaust survivors or relatives of those who perished: Now that Hitler is dead, do you feel a sense of peace and tranquility? Are you able to finally gain closure for the horrors of the past?

To believe that the unspeakable cruelties suffered by six million could in some way be diminished by the death of those who perpetrated them borders on the ludicrous. There is no closure possible for the crimes committed by a regime that declared genocide a civilized option.

To speak of closure in response to evil is in a sense to bring any further discussion of it to an end. We build Holocaust museums, we reflect on the Holocaust in works of art, literature and film, and we recall its victims on Yom HaShoah precisely because we know that if we were to reach a point of closure we would no longer be inspired to draw any lessons for the future from the tragedies of the past.

That's why there is such strong danger of rejoicing too much at the death of an enemy.

When Hitler died, we needed to realize it was the death of the man but not yet of his ideas. Nazi Germany proved what anti-Semitism left unchecked could ultimately lead to. In its aftermath it would be our mission to speak out against bigotry, to defend human rights and to ensure that "never again" would not be an empty slogan.

The death of an evil leader still leaves room for myriad followers to keep alive his ideology. In the final analysis it is still easier to kill one man who threatens us than to annihilate the influence he succeeded in inspiring in his disciples.

What I fear is that our joy in killing Osama leads us to the mistaken belief that we have destroyed the power of his message.

There are still far too many in Osama's world who continue to believe in his ideas.

There are still far too many in Osama's world who continue to believe in his ideas. His voice is still heard among all those convinced that violence is the only way, who justify the mass murder of innocents in the supposed name of religion, who choose suicide bombing as a divinely blessed means for gaining world domination.

Osama’s death hasn't changed them. Quite the contrary, they may now feel duty bound to avenge his killing.

The biblical commentators have a profound insight on the verse that introduces the Shirah - the song of Moses and the Jewish people. "Then," says the Torah, "sang Moses and the children of Israel." Then, explain the rabbis, and not before. Only after the entire story was over and all the Egyptians were dead did the Jews feel it proper to finally rejoice.

Singing the song too soon would have been a sin.

More than 50 years after the Holocaust, we still do not feel like singing. We reflect, we study, we continue to mourn those who perished. But we do not diminish the tragedy of the six million by daring to suggest that we have found closure.

Less than 10 years after 9/11, we can take some comfort in knowing that the mastermind behind the death of more than 3000 innocent Americans has at long last received his just punishment. But it is not yet time to sing. We need to continue to mourn for those we lost. And we need to commit ourselves to persevere in the battle against Osama's followers who remain dedicated to destroying us.

When we finally succeed, then and only then will our mouths be filled with laughter and our voices with song.

Not So Trivial Pursuit
For Every Individual, A Torah Scroll
Allegiance To The Monarch
Meet the Real You: Yom Kippur
Comments
MOST POPULAR IN Current Issues
Our privacy policy
Aish.com Is Looking for Great Writers